While not exactly the most handsome brute on the primeval block, this new specimen of block-headed creature, officially named Llukalkan aliocranianus, prowled the wilds of modern Argentina some 80 million years ago in the Late Cretaceous during the Golden Age of the Dinosaurs.

This newly-identified genus and species of furileusaurian (stiff-backed lizard) abelisaurid dinosaur was part of an imposing group of aggressive meat-eaters hailing from the Gondwana supercontinent. Its catalogued name is derived from the native Mapuche meaning ‘one who causes fear' (Llukalkan), and the Latin word for ‘different skull’ (aliocranianus).

As detailed in a new research paper published last week in the Journal of Vertebrate Paleontology, the coarse-looking beast grew to roughly 16.4 feet in length, sported long claws, delivered a vicious bite courtesy of razor-sharp teeth, and possessed a powerful sense of smell.

Its most distinguishing ability points to an acute sense of hearing, possibly far greater than the majority of prehistoric beasts of the time. Its large blunt skull was formed by thick bones, bulges, horns, and sharp ridges, similar in many ways to today's reptiles like the Gila Monster or iguanas. 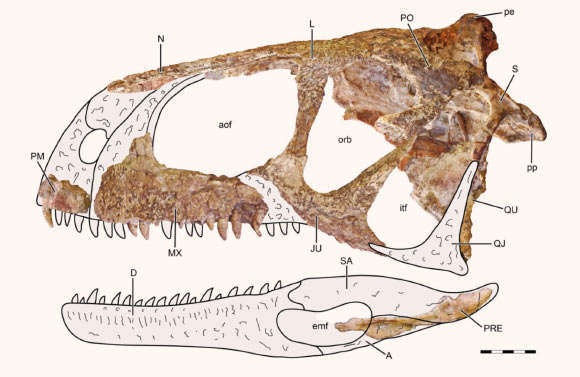 “But the most distinctive feature of Llukalkan aliocranianus is a small posterior air-filled sinus in the middle ear zone that has not been seen in any other abelisaurid found so far,” said Dr. Ariel Mendez, a paleontologist at the Patagonian Institute of Geology and Palaeontology, in an official statement.

“It means that this dinosaur likely heard differently to other abelisaurids — most probably better and similar to that of a modern day crocodile. This finding implies a different hearing adaptation from other abelisaurids, and likely a keener sense of hearing.”

Abelisauridae were a ferocious family of carnivorous theropods averaging 16 to 30 feet long. They roamed across the region of Patagonia and other territories represented by the ancient subcontinent Gondwana, which is known today as Africa, India, Antarctica, Australia, and South America. Nearly 10 species of this dominant predator resembling T-rex have been discovered around Patagonia.

“This is a particularly important discovery because it suggests that the diversity and abundance of abelisaurids were remarkable, not only across Patagonia, but also in more local areas during the dinosaurs’ twilight period,” Dr. Federico Gianechini, a paleontologist at the National University of San Luis, noted in a statement.

The smaller Llukalkan was a close cousin to Viavenator, but its vein-hosting holes in the skull were bigger and situated farther apart on the skull's supraoccipital crest.

“This discovery also suggests that there are likely more abelisaurid out there that we just haven’t found yet, so we will be looking for other new species and a better understanding of the relationship among furilesaurs,” Dr. Gianechini added.

It's a fan thing
Join SYFY Insider to get access to exclusive videos and interviews, breaking news, sweepstakes, and more!
Sign Up for Free
All Posts About
News
Science
History
Paleontology
dinosaurs
Related Stories