By now we've all committed to memory the wild scene in 1993's Jurassic Park where a rampaging Tyrannosaurus rex is chasing down a gas-powered Jeep on Isla Nublar, with the vehicle's side mirror indicating that "objects in mirror are closer than they appear."

For decades, the consensus between paleontologists was that T. rex was a fast runner and capable of open-ground speeds up to 30 miles-per-hour, which is near sprinting mode for the gold medal-winning Olympian Usain Bolt.

Past speculations of T. rex's top speed always concentrated on the creature's mass, hip height, and length of stride indicated by fossilized footprints. Conservative estimates concluded that the predator's walking speed probably rated between 4.5 and 6.7 miles-per-hour. But pump the brakes, as those older figures just might be a bit on the high side.

Now a new research paper published this week in the online journal Royal Society Open Science ignores the obsession with T. rex's burly legs by investigating the critical role of its elastic tail and the unique swaying, the vertical movement it displays in digital simulations. Based on studying new biomechanics, the beast's ambulatory limits have been greatly reduce to a sluggish 3 miles-per-hour.

"Dinosaur tails were vital to the way they moved around, in multiple ways," lead author Pasha van Bijlert, a master's candidate studying paleo-biomechanics at the Free University of Amsterdam, told Live Science. "Not only does it serve as a counter balance, the tail also produces a lot of the required force to move the body forward. It does this through two large tail muscles — the caudofemoral muscles — that pull the legs backwards during each step.

"This combination — passive suspension while active in locomotion — is unique to dinosaurs; there are no animals alive today with this feature. Because of this, we were highly intrigued by its role in the way that T. rex would have walked." 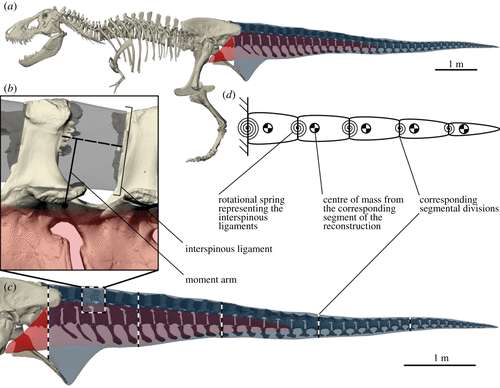 Watching how a T. rex tail sways, energy is stored and released via a network of stretchy ligaments. Upon reaching a rhythmic swinging the thick appendage reaches a resonance called "natural frequency," which can be used to gauge the animal's natural walking cadence.

To create a comprehensive animated simulation, van Bijlert and his colleagues scanned a full-grown T. rex skeleton named "Trix" from the Naturalis Biodiversity Center in the Netherlands. From there, the researchers highlighted marks on the well-preserved vertebrae that indicated ligament attachment locations to deliver a workable biomechanical model of the tail. A pre-determined step length of 6.2 feet was agreed upon for the purposes of the study.

"The tail model gives you a likely step frequency/rhythm for T. rex, but you also need to know how much distance it travels with each step," van Bijlert added. "Our baseline model had a preferred walking speed of 2.86 mph. Depending on some of the assumptions regarding the ligaments and how the vertebrae rotate, you get slightly slower or faster speeds 1.79 to 3.67 mph, but across the board, they're all slower than earlier estimates."

There are still some lingering questions and variables to be considered in this simulation that might not adequately address the impact of the meat-eater's muscles and side-to-side tail movement.

"No one in their right mind has thought that dinosaurs had perfectly rigid tails (up/down or side/side), but it has been a neglected topic for locomotion," notes John Hutchinson, a professor of evolutionary biomechanics at The Royal Veterinary College in Hertfordshire, in Live Science's email. "So, this study covers some new ground in a clever way with an original model."

It's a fan thing
Join SYFY Insider to get access to exclusive videos and interviews, breaking news, sweepstakes, and more!
Sign Up for Free
All Posts About
News
Science
Science
Tyrannosaurus Rex
dinosaurs
Related Stories

We're getting a clearer view of the interior of the Sun