No new comics doesn't mean the end of the comics industry. Not by a long shot.

I’ve always hated April Fool’s Day. It’s a pointless day full of dumb pranks that has been made even more annoying by social media.

How I wish this year’s first day of April would have been a bad joke. "Sorry folks. We’re canceling New Comic Book Day today!" is the kind of lame prank that would usually earn a Ka-Block from me on Twitter. Unfortunately, it was all too real.

Because of the nationwide economic standstill, the sole distributor of comics in North America, Diamond Comics, stopped shipping new comics as of this week. You can read more details about it and what the industry is doing to help get new stories to readers, be it print or digital, in this week's Pull List. But what it means, in its barest, most painful form, is no new comics for the foreseeable future.

Believe me, I know. New comic books rank really low on the priority list when you see estimates that up to 200,000 Americans could die from COVID-19. Still, it's hard to hear that no new comics are arriving at stores and not feel glum. Like many, I feel rather helpless these days. The best most of us can do is stay the hell home and out of the way of the medical professionals working to save lives.

But there was something I could do. I could read a comic. Or two or ten. Hell, I thought I was going to make a dent in my To-Read pile when the stay-at-home measures began, but I've failed miserably. So what did I do at the end of what should have been NCBD when the kids had gone to bed and I had some time to unwind?

I read some comics. Fresh off the spinner rack, I read three comics I was long overdue to peruse: Plunge issue #1 from DC's Hill House Comics imprint, and two Marvel titles, Marvels Snapshots: Sub-Mariner and the debut issue of the Dawn of X satellite title, Marauders. I know, I'm shamefully late on the last title, but ... WOW. The first issue is a master class in setting up the mission statement of the series. Gerry Duggan clearly knows these characters and their history, and he had me the moment he referenced Kitty's ghastly roller skate costume from Uncanny X-Men #149. 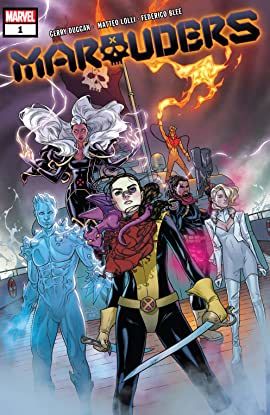 Nostalgic notes aside, setting Kitty -- sorry, Kate -- as the leader of the X-Men's rescue team with her oldest friend Ororo as her right-hand woman is just perfect casting. I wish all the X-Men books had the same sense of efficiency and clarity (thanks to Matteo Lolli's crisp art) that Marauders #1 has.

Marvels Snapshots was a book I expected to like because the original series it's based on, Marvels, is an all-time personal Top 5 comic series. A series with stories set in the universe created by Kurt Busiek and Alex Ross is low-hanging fruit for a reader like me. But Alan Brennert and Jerry Ordway create a special type of standalone feature here that adds a somber edge to the nostalgia of post-war America. It also offers surprising depth to Namor and shows a different side to a character who, despite 80 years of publication, remains a bit of an enigma. Ordway's throwback approach to the art adds to the vintage appeal of the story. I'm looking forward to seeing other Snapshots.

To top off my wild Wednesday night, I treated myself to some killer comics comfort food. I pulled one of my favorite hardcovers off the shelf, Avengers: The Private War of Doctor Doom. This mid-'70s run was right at the beginning of an epic four+ years for my favorite lineup of Earth's Mightiest Heroes. The credits is a like a Murderer's Row of Bronze Age comics talent: written by Steve Englehart, Gerry Conway, Bill Mantlo and Jim Shooter, drawn by George Perez, Sal Buscema with some unbelievable covers by Jack 'The King' Kirby, and featuring the return of the formerly-dead Wonder Man, aka my FAVORITE Avenger! 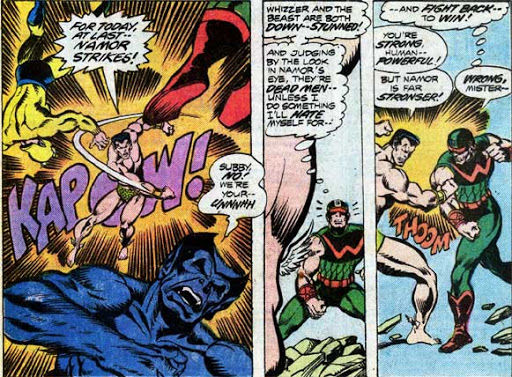 This tale oozes nostalgia for me. Not even the clunkiness of the crossover with the short-lived '70s oddity Super-Villain Team-Up could wipe the smile off my face of seeing the all-too-brief but still incredible slugfest between Wondy and the Sub-Mariner before they realized they're on the same side (let the record show Wonder Man laid out the future Illuminati member). I read the entire collection, cover to cover, and am happy to report it holds up remarkably well.

By the time I shut the lights and was ready for bed, I felt much more positive about things. My night of four-color fun reminded me that no matter what adversity the industry faces, as an art form, comics are doing just fine. And it will survive this.

What are you reading now? Got any old favorites on your reading pile? Find me on Twitter/Facebook/Instagram and let me know!