Living life as an arachnid with a name like ogre-faced spider (Deinopis spinosa) is tough, and might not attract many pals in the animal kingdom.

But this interesting creature likely deflects any hurtful remarks hurled its way and instead concentrates on performing acrobatic backflips to grab its meals after listening for subtle wing flaps using special super-hearing organs located in its gangly legs.

These strange cuts are located at the tip of each leg and measure between 0.0000003 and 0.000007 inches in length. They contain a nexus of nerve cells that are acutely aware of minuscule pressure changes due to another insect's sound waves rippling through the air.

Ogre-faced spiders are common in dense forested regions of Australia, Africa, and areas of the southern United States. These tiny arachnids measure less than an inch in length and mostly exist underneath palm fronds and other thick vegetation, where they demonstrate their nocturnal circus tricks to ensnare moths, mosquitoes, and flies that zip by their territory.

According to the paper, ogre-faced spiders have an extraordinary hearing ability and can detect noises up to 6.5 feet away and target frequencies between 100 and 10,000 hertz, a range nearly equivalent to that of a human.

"It's very alien to us because we don't have a sensory system like this," said Stafstrom. 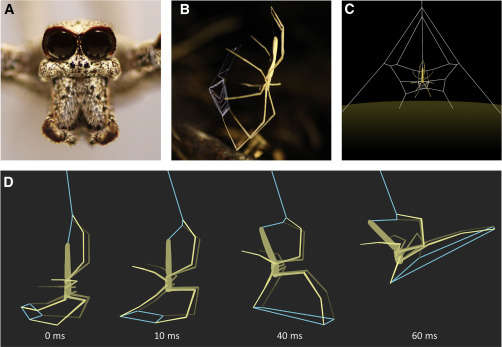 With arachnids lacking eardrums, Stafstrom and his team were curious as to the spider's innate prowess when snagging prey from mid-air. So, after witnessing them "flipping" after certain sounds were administered, tests were conducted to determine what other methods the creature might be employing.

"The flip is ballistically rapid, it's very quick … and they're surprisingly accurate in terms of enabling the spider to catch prey on the fly," Stafstrom told Live Science. "From such a tiny little spider, with a tiny little brain, it's very impressive. They've got the biggest eyes of any spider."

Back in 2016, Stafstrom investigated whether or not these itsy-bitsy spiders could capture food without their massive night-vision eyes. By blindfolding the spiders with dental silicone, he discovered they couldn't snatch crawling prey from the forest floor, but were still adept at catching flying insects, pointing to the notion that they were using another sensory device other than vision.

In this most recent study, Stafstrom and his team played a soundtrack of various noises to figure out which sounds initiated the impressive backflips. Low-frequency sounds between 150 Hz and 750 Hz, replicating the wingbeats of a number of airborne insects, seemed to trigger the exaggerated action.

Not one sound of any frequency provoked them to lunge down to the ground, proving that the ogre-faced spiders use their eyes, not ears, to pounce on crawling food.

A helpful tip for active bugs zooming in the vicinity of Deinopis spinosa would be to put your wings in whisper mode and be very, very quiet!