Gliding over the primeval landscape of ancient China like a living jet airliner, pterosaurs were the kings of the airways during the Age of the Dinosaurs and existed in their prime between 210 and 65 million years ago on Earth.

These magnificent airborne reptiles were the planet's first flying vertebrates, arriving far earlier than bats or birds, and many species, like the giant azhdarchids, were the biggest soaring creatures ever to have existed, with impressive wingspans of more than 30 feet and standing as tall as today's African bull elephants and even adult male giraffes.

Adding to the awesome aviary of lofty pterosaurs, a freshly identified species officially named Ordosipterus planignathus has just been identified and detailed in a new report recently published in the online journal China Geology. Unearthed in remote Inner Mongolia, Ordosipterus planignathus thrived in the Early Cretaceous period between 120 and 110 million years ago.

This new genus and species was catalogued based on fossilized specimens of its incomplete lower jaws unearthed in the Luohandong Formation near Xinzhao village in Inner Mongolia, China. It's a member of the Dsungaripteridae family of evolved pterosaurs that can be added to the group of several similar genera and species previously found in Asia and South America. 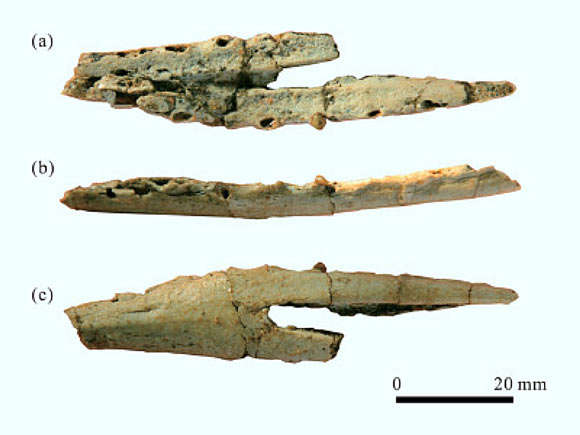 “As a member of the Dsungaripteridae family, Ordosipterus planignathus enlarges the geographical distribution of the dsungaripterid pterosaurs from the northwestern China — with western Mongolia — to central North China,” explained Dr. Shu-an Ji, a paleontologist in the Institute of Geology at the Chinese Academy of Geological Sciences and the Key Laboratory of Stratigraphy and Palaeontology at China’s Ministry of Natural Resources. “The specimen consists of the anterior portion of articulated lower jaws, with a partial tooth and several alveoli. The rostral tip of the mandibular symphysis is missing. The preserved segments of the left and right dentaries measure 7.7 cm (3 inches) and 4.5 cm (1.8 inches) long, respectively.”

Ordosipterus planignathus represents the first definitive pterosaur hailing from the Ordos Region in Inner Mongolia, and only the second pterosaur species from the same territory after Huanhepterus quingyangensis in China's Gansu Province.

“This fossil further strengthens the opinion that the northern China and Mongolia belong to a unique and endemic dinosaur biogeographic realm featured by the presence of Psittacosaurus and pterosaurs during the Early Cretaceous period," he added.

It's a fan thing
Join SYFY Insider to get access to exclusive videos and interviews, breaking news, sweepstakes, and more!
Sign Up for Free
All Posts About
News
Science
Paleontology
dinosaurs
Related Stories