Before Kung Fu Panda ever sold a single bowl of noodles or practiced even one flying front kick, Panda Khan was pop culture’s most famous fighting panda. Created by Dave Garcia and Monica Sharp, Panda Khan has been on the down-low for quite a few years now. However, the iconic panda is well known to nostalgia lovers, who remember him as a regularly featured character in the Teenage Mutant Ninja Turtles comic book crossovers. Not only that, the karate-smashing Panda even had his own action figure; in 1990, Playmates included him in the Teenage Mutant Ninja Turtles toy line, where he enjoyed success as a non-Turtle one-off piece, much in the same fashion as Usagi Yojimbo (aka that random rabbit in the TMNT toy line).

While the Panda Khan character might be recognizable to hardcore Turtles fans and toy collectors of the '90s, he was never featured in the highly popular Ninja Turtles cartoon show. Issues of the original comic book series The Chronicles of Panda Khan (with and without the TMNT crossover issues) had a burst, but the character tumbled out of the spotlight in the late '90s and early 2000s. He dwindled away and disappeared into the pop-culture ether.

Until now, that is. Panda Khan has had its rights signed exclusively to Gaelstone Media in Ontario, Canada. This acquisition means a brand-new animated series, and yes, you’ve guessed it ... new toys! 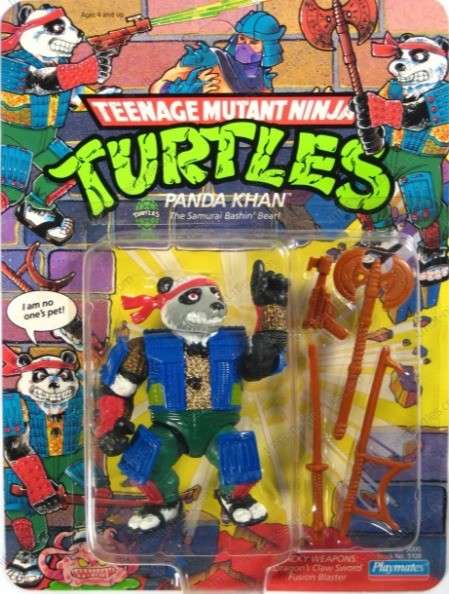 "The team at Gaelstone and I were so very fortunate to meet Dave Garcia and Monica Sharp, the amazingly kind and generous creators of such a timeless character," Gaelstone Media’s CEO, founder, and co-creative director, Jon Robert Bryans, tells SYFY WIRE. "It was enormous for us, and we worked so hard to make it happen."

“I wanted to grow the brand of Panda Khan into something it wasn’t the first time around [when he was part of the TMNT universe] but deserved to be," he continues. "Panda Khan does come with pre-existing lore in the comic books, but we will be taking him in a slightly different direction with the animated series. We at Gaelstone Media have created a universe (not unlike the Marvel Cinematic Universe), and Panda Khan was a perfect addition to it: The Anthroverse."

While the idea of an interconnected world featuring stories of various anthropomorphic characters may seem like a tall order, Bryans assures SYFY WIRE that he has it all figured out. In fact, one of the properties in this world, entitled Action Mice, has already been snatched up: A full season of Action Mice is now in production and will premiere on Amazon Prime.

Intrigued by the notion of this Anthroverse, we asked Jon Bryans to elaborate on his vision, not only for Panda Khan and the in-production Action Mice, but the bigger vision overall.

“As I was saying about The Anthroverse, it’s big,” Bryans explains excitedly. “The Anthroverse is the universe in which Gaelstone Media’s flagship titles all exist. Staged like the Marvel Cinematic Universe, each title will be a standalone property. However, they will all link with and cross over with the linchpin property, Action Mice. Building the story, Action Mice will set the tone and pace for the other properties in The Anthroverse, such as Ranger Rabbit, Kennel 9, FireFROGS, Agents of F.E.L.I.N.E. (Federal Law and Intelligence Enforcement), Panda Khan, and Dire Wolves. It’s going to be huge.”

Panda Khan’s original creators Dave Garcia and Monica Sharp have been working in step with Bryans to flesh out every bamboo stalk and fuzzy ear along the way. While the two continue to work on issues of The Chronicles of Panda Khan comic book (which will differ from the Panda Khan animated series that Gaelstone has in development), Gaelstone wants to ensure that because of the character’s whimsical beginnings, the two creators are happy with the panda’s treatment.

“Dave and I were living together in 1978 when he did several assignments for an art class at Cal-State Long Beach, including a watercolor of a cute panda from Washington eating breakfast at the D.C. National Zoo," Sharp explains. “I told him, 'Oooh, that's cute! I want it!' And he said, ‘It's yours after it's graded.’ But his professor talked him into entering his paintings into an art show, and Dave sold them all. I gave him the sad girlfriend guilt trip, so he promised to make me another panda watercolor. I was left waiting for a long time!”

By the time Sharp and Garcia married in February 1980, Sharp was still waiting on that panda. But along the way, the comic-creating duo began creating worlds (and a small person) together!

“First, we were published in a fanzine called The Grape Press by Richard Harris,” Sharp says when we asked about the couple’s journey into comics. “Then we took the painting and zine art to San Diego Comic-Con and showed it around. With various meanderings along the way, we signed a contract with Wendy and Richard Pini, the creators of ELFQUEST. We had befriended Peter Laird and Kevin Eastman during this point, and TMNT was the biggest pop phenomenon of the time. So in 1986 we started self-publishing.”

Garcia and Sharp continued working full time jobs and creating comics together. Then, 30 years later, their friend Mickey Clausen, who does color work on The Chronicles of Panda Khan comic book, got the two in touch with his friend Bryans from Gaelstone Media. Bryans was interested in Panda Khan, and it opened a dialogue. He pitched his vision for the character to Garcia and Sharp, and everyone was all in.

News of Panda Khan’s resurgence is making waves among the pop culture sphere with nostalgia lovers, TMNT fans, and people who simply loved Panda Khan and have kept up with his stories over the years. And there's only more to come down the line.

“With the growing number of followers across social media and an astoundingly positive response from old and new fans alike, Panda Khan is on the precipice of firmly setting itself in The Anthroverse and the imaginations of kids the world over,” Bryans says. “We over at Gaelstone know that Panda Khan is a fantastic character and never had a moment of doubt that snagging him was a phenomenal choice. But getting to see and hear the excitement hum among fans who wanted to see Panda Khan on TV as kids and didn’t get to? That is what makes everything we’re doing matter most. We want to tell good stories ... Panda Khan is a good story. And we know he will become that classic nostalgic character for a whole new generation of children and fans alike.”

Lost in the '90s: Struggling to find Asian American representation when there was none

Oldest known use of narcotic opium discovered in ancient pots