Looking for the ultimate sci-fi binge? Look no further than Peacock, which has enough genre content to sustain even the most dedicated of die-hards!

Head to a snowy future in which the remnants of humanity traverse the globe in a perpetual locomotive. Or perhaps you're feeling a trip to the smartest town in the United States. No? OK, maybe an anthology series inspired by one of the most celebrated authors of all time is more your speed... Tough customer, eh? How about lowly computer programmer learns he's a messianic figure destined to defeat tyrannical machines? Oh yeah, now we're talking!

Whatever you're in the mood for, we've probably got it on this list of ten classic sci-fi shows and films you can now stream on Peacock.

A modern classic, Bong Joon-ho's adaptation of the French graphic novel, Le Transperceneige, works on several different levels. It's a commentary on the devastating effects of climate change, a critique of societal inequality, and just a cool sci-fi story about a train that continuously circles around the world, cutting through thick layers of post-apocalyptic ice. There's a lot to love here and once you're done, you can check out the Snowpiercer TV show over on TNT.

When Nicolas Cage starts predicting the end of the world, you better sit up and pay attention. While Alex Proyas' 2009 thriller doesn't completely stick the landing, its concept is strong enough to get you over the doomsday finish line.

The premise is simple, yet effective: What if you discovered a piece of paper containing the dates of every terrible disaster in recorded human history? It's pretty chilling stuff that even impressed the late Roger Ebert, who found himself blown away by the film's big plane crash set piece.

The Cylons are coming! The Cylons are coming! Ronald D. Moore's gritty and compelling reboot of a 1970s classic is something you need in your life. As crucial to the science fiction genre as Star Trek and Star Wars, this rebooted iteration of Battlestar Galactica has four seasons — and nearly 100 episodes — you can binge right now.

The nation's brightest minds are all concentrated into one town in the Pacific Northwest and tasked with cranking out miraculous invention after miraculous invention. What could possibly go wrong? Oh, just about everything you can imagine! Everyman Jack Carter (played by Colin Ferguson) is our guide through this wacky world when he's made sheriff of the eggheaded hamlet.

Gods walk among us in Heroes, a comic book-inspired series from creator Tim Kring.

The show follows the lives of everyday people who suddenly discover that they have superpowers. Heroes was so well-received by audiences, that it spawned an entire multimedia franchise of graphic novels, action figures, a mobile game, a digital experience, and a 2015 miniseries.

Released in 2005, the feature-length conclusion to FOX's cult-fav sci-fi show Firefly currently holds a very fresh 82 percent on Rotten Tomatoes. It also marks one of the earliest film roles for Chiwetel Ejiofor, who plays The Operative (an agent of the nefarious Alliance). His villainous performance is enough to get you psyched for Karl Mordo's return in this spring's Doctor Strange in Multiverse of Madness. Oh, and Nathan Fillion and the rest of his space cowboy crew are pretty great, too!

You really can't go wrong with the simulated adventure that started it all.

The Matrix redefined the sci-fi landscape, and we're still feeling its creative influence all these years later. Didn't care for The Matrix Resurrections? Not a problem! Simply cleanse your palette with a return to the OG story of Neo, Trinity, Morpheus, and the rest of the machine-fighting heroes whose old programming continues to live on in modern-day Hollywood. 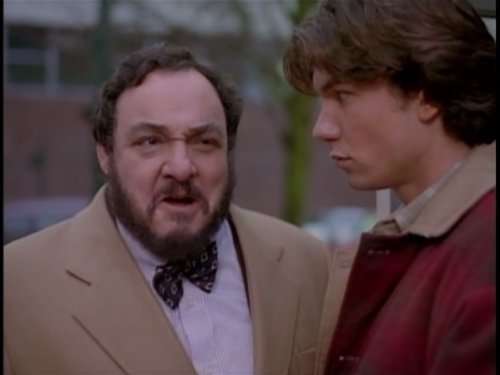 The elevator pitch for Sliders could be "Quantum Leap meets Doctor Who." Featuring the talents of Jerry O'Connell (the recent voice of DC Animation's Superman) and John Rhys-Davies (Sallah in the original Indiana Jones trilogy), Sliders ran on FOX for its first three seasons before moving over to Sci-Fi for its fourth and fifth outings. Very on-brand for a show about folks who hop, er, slide between different realities. Doctor Strange who?

Something not-so-wicked this way comes. Created by and named after the man himself, The Ray Bradbury Theater ran for a total of 65 episodes across six seasons between 1985 and 1992. The most impressive thing about this underrated anthology series is that Bradbury wrote every single episode, adapting his own classic short stories and novels (like "A Sound of Thunder") for the small screen.

Despite its name, Space: 1999 was actually produced in the late 1970s (in the same way that Kubrick's 2001: A Space Odyssey came out in 1968). Co-created by Gerry and Sylvia Anderson, this cult series follows the crew of a futuristic moon base who become galactically-displaced refugees when Earth's lunar satellite is knocked out of its orbit. Hold on just a hot second... do you think Roland Emmerich was inspired by the show when writing Moonfall?

Peacock & SYFY WIRE are both owned by NBCUniversal.

It's a fan thing
Join SYFY Insider to get access to exclusive videos and interviews, breaking news, sweepstakes, and more!
Sign Up for Free
All Posts About
Features
TV
Battlestar
Eureka
Heroes
Knowing
Peacock
Ray Bradbury
SYFY Insider
Serenity
Snowpiercer
Space: 1999
The Matrix
lists
You May Also Like
Recommended by Zergnet
Latest on SYFY WIRE