Sailing into the same turbulent waters as Disney's Pirates of the Caribbean franchise and STARZ' bloody Black Sails series, a rough and rowdy new pirate title from Image/Top Cow aims to grab you by the jugular and shake the pieces of eight from your pockets when the premiere issue docks on May 13 — and SYFY WIRE is launching a special look at the debut issue.

A Man Among Ye is smartly written by Stephanie Phillips (Butcher of Paris, Descendent) and linked with spirited artwork by Craig Cermak (Red Team, Voltron), with its swashbuckling historical adventures centered around two of the most feared and crafty cutthroats ever to swing a sharp sword ... the notorious Anne Bonny and Mary Read. 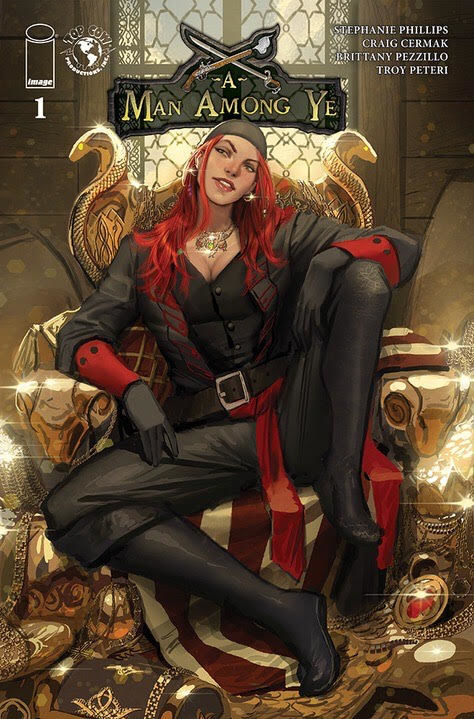 Chronicling the last gasp of the Golden Age of Piracy in the early 18th century, when men were men and many of the best bloodthirsty buccaneers were women, Phillips and Cermak's adrenalized series resurrects those magical olden times to breathe fresh life into the genre's billowing sails.

It's the savage saga of Anne Bonny and Mary Read as they raise the skull and crossbones flag, clash cutlasses, and hunt down a legendary treasure that could make them rich beyond measure. This was an historic era when plundering with female privateers and pirates was believed to be bad luck, but Anne and Mary could be the last two persons capable of protecting the pirates' freedom-loving way of life if they can stay alive long enough.

"A Man Among Ye brings Anne Bonny's history in the waning days of piracy to life," Phillips tells SYFY WIRE. "Anne is a woman with so much legend surrounding her that she has been a lot of fun to work with in a comic series. She was a skilled sailor who left her husband to pursue the high seas. I really wanted to work with this story because it just felt like this is a woman with a lot of drive and a very unique attitude, especially for the 18th century.

"Craig and I really wanted to explore piracy through Anne's eyes and look at a pirate's life from a somewhat untold perspective," she adds. "The recorded history about Anne is slightly limited, but in many ways that means that Craig and I got to play with the many infamous stories about Anne that make her a slightly larger-than-life character. At its core, A Man Among Ye is a story about adventure that we've had a lot of fun creating."

"It’s a fast-paced adventure with a great cast of characters that allows me to let loose with drawing the dirtiest of pirates along with the most striking," Cermak tells SYFY WIRE. "A great balance of character moments and high stakes gives the readers plenty to treasure."

Now weigh anchor and hoist the mainsails for a sneak peek at Image/Top Cow's A Man Among Ye #1 in the full gallery below, injected with arresting art and a rollicking yarn that captures the essence of the classic pirate way in all its guts and glory.

Set sail into our first look at Image/Top Cow's new pirate fantasy, A Man Among Ye #1

It's a fan thing
Join SYFY Insider to get access to exclusive videos and interviews, breaking news, sweepstakes, and more!
Sign Up for Free
All Posts About
Comics
News
Image Comics
Pirates
Top Cow
You May Also Like
Recommended by Zergnet
Latest on SYFY WIRE