Vault Comics isn't a company that's exactly shy about its goal of thorough and complete representation in its books. One year ago, the Wassel brothers, Damian and Adrian, who founded Vault, started a Women in Front initiative that promised every issue of every comic in Vault's lineup would have at least one cover drawn by a woman creator.

That line of thinking extends to its comic interiors, as well. This initiative, at the end of the day, is about telling the stories that other companies maybe aren't and having them told by the creators those companies often don't hire either.

This week Vault Comics continues that trend with the release of Queen of Bad Dreams (written by Danny Lore, with inks by Jordi Perez, colors by Dearbhla Kelly, and letters by Kim McLean). It's a comic about Daher, an Inspector Judge whose job it is to chase down dreams that escape into the real world (called "figments") so that those figments can be returned to the dream world, destroyed, or be acknowledged as sentient and allowed to live on Earth. It's a little bit Paprika, a little bit Blade Runner, and a whole lot of talking about what it means to be marginalized.

SYFY WIRE spoke with writer Danny Lore about what Queen of Bad Dreams is about, how Vault helped shape the story, and also the impact working at the same comic book store as comics creators such as Vita Ayala, Matthew Rosenberg, and Tyler Boss has on Lore's writing.

"Queen of Bad Dreams definitely was in part a reaction to a lot of media I see," Lore says. "A response to just the concept of a manic pixie dream girl. We take that girl and we pull her out of the dreams where she's considered this perfect being. But [she's] perfect to a specific person who has all of this control, and then [we] give her back her mind."

"This book was, from its conception, supposed to be a story about women," Lore reveals. "Particularly women of color and the kind of labor that they're attached to ... But at the cost of their own agency and how they're pushed into existing for other people. In particular, Ava [the black woman and figment Daher is chasing in Queen of Bad Dreams #1] was created very specifically to make statements about how and when people want black women as images; what they assume, how it's easy to tell a story about them being angry and aggressive. So that was the idea behind Ava, to immediately be like, this is a black woman capable of many things and of being many things. This will be a story about the first time she's given the option to fight to be who she wants."

Lore elaborated on Daher's allies in Queen of Bad Dreams, such as her partner and mentor West. "With West, I wanted a prominent and important non-binary character," Lore explains. "So I decided that they would be Daher's mentor because it says a lot about the build of the world when you have a black, non-binary character as the character that has helped the protagonist, has taught them and is the person that they go to for advice. I think that that already says something about gender in this world."

And from a storytelling perspective, one of the most interesting choices Lore made was having not the protagonist, Daher, serve as narrator, but her ex-wife, Viv, instead. "I really wanted a narrator telling the story," Lore says. "A narrator who's emotionally tied, but then can also kind of almost literally hold the hand of the person reading. Not in a 'You need it explained,' but in a 'I care and I'm here and I support you,' because so much of the story is about agency and how it's tied to having the support of a community and protection. So I thought that, on a meta level, having a narrator that serves that purpose would be really interesting. Then, in developing the story with Adrian [Wassel] over at Vault, we're having a lot of conversations and he came up with the idea that not being our protagonist and then the second he said that I was like, 'It has to be Viv.'" 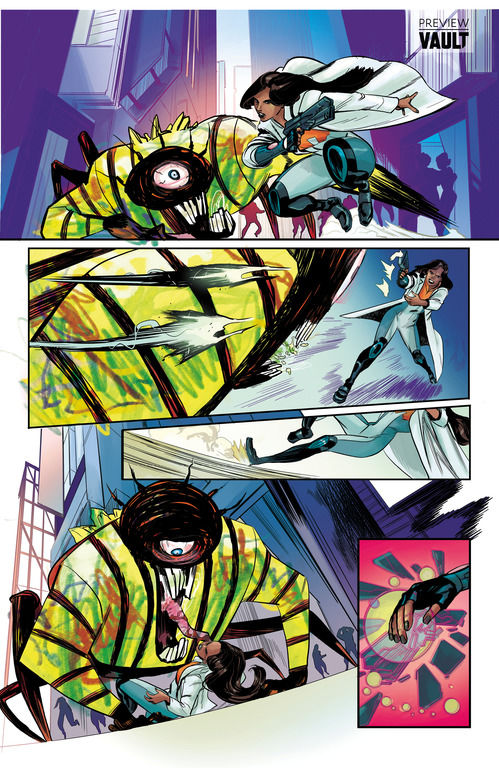 Speaking of Adrian Wassel, Lore credits his editorial work for helping them tell the most authentic version of Queen of Bad Dreams they can. "It is very easy, as a new writer, to get in your head and become paranoid about rules, about what you think you are or aren't allowed to do as a creator," Lore says. "'I'm not Warren Ellis' or 'I'm not Alan Moore.' 'I'm not allowed to be this weird.' Adrian's response is 'Well, try it and if it doesn't work, we'll figure out what you were trying to do and make it as weird as you want it to be. Make it as poignant as you want it to be.' It's a really encouraging space to be in with an editor."

Lore also works selling comics at New York City institution Forbidden Planet and has done so for over a decade. In that time, they have worked with comic writers such as Vita Ayala (The Wilds, Xena: Warrior Princess, Submerged) and Matthew Rosenberg (Uncanny X-Men, The Punisher), as well as artist Tyler Boss (4 Kids Walk Into a Bank) and Valiant Comics' own VP of sales and marketing, Matthew Klein. (Also, I worked there and know all of these people, for transparency.) So how does that influence Lore's writing?

"In terms of working at Forbidden Planet, Vita Ayala is my best friend. I speak with them about storytelling, if not on a daily basis, a multiple-times-a-week basis. I think I learned a lot about how I want to tell a story from going back and forth with Vita," Lore explains. "Then Tyler and Matthew, I think I learned a lot about industry and a lot of the technical stuff, both from talking to them and listening when they talk. I definitely think that this story and other pitches might have been very different and might not have gotten looked at were it not for having shown Matt stuff, who's also been super supportive as well."

And who is Queen of Bad Dreams for?

"Having worked at Forbidden Planet a long time as an employee, a thing that a lot of us hold very dear is when we get someone who comes into the shop and feels as if the rest of their life, they haven't felt comfortable enough to walk into a shop," they say. "Then we make them feel at home. We pile them with books that look like them or have their interests. We listen when they ask for recommendations, and they leave happy because they're like, 'Oh, maybe I belong with these comics.' They start reading, and that's a really kind of important moment in retail. I think that I'm writing for them. I'm writing for the brown girls who walk in or the brown kids and queer kids. I'm writing for those people who get to see something weird and different, and I hope that they get excited by books like this."

Queen of Bad Dreams #1 drops April 24. You can get a copy signed at Forbidden Planet at 832 Broadway that same day from 6-8 p.m.

It's a fan thing
Join SYFY Insider to get access to exclusive videos and interviews, breaking news, sweepstakes, and more!
Sign Up for Free
All Posts About
Comics
Features
Interviews
Queen of Bad Dreams
vault comics
Related Stories