It's easy to feel helpless in the midst of a pandemic, particularly when the pandemic rages on, but people seem to have given up. Add to that the roll-back of trans rights and violence against trans folks, the violent response from police to protests against police brutality, abject voter suppression, and an uptick in white supremacist violence against Black people and yeah, helplessness calls like an old friend.

I have to be leery of that siren song, though. Not just for my mental health, but because as a white person, I wield a lot of privilege, including the privilege of giving up. And if I want to be an accomplice, an anti-racist, and a fighter for justice, I have to confront that nihilism in myself and in all of us.

One read on recent events, the nihilist one, says it's the end of the world. Another read says these are the moments when things change, that all of this horror and terror and pain can end not in a return to what came before, but in forming a new world. (That isn't to say that any of the needless deaths throughout history that led to this point are necessary sacrifices; they are still senseless, heartbreaking examples of the white supremacist patriarchy.) Pivoting from the first narrative to the second is not easy, but it's the work required of us.

In this time of great upheaval when we can feel paradigms shifting, it's imperative that we open our minds to new ways of thinking and being to build a new world. Guidance for how to build that world is all around us, including — maybe even especially — in our science fiction and fantasy. In the words of adrienne maree brown, "All organizing is science fiction. We are bending the future, together, into something we have never experienced. A world where everyone experiences abundance, access, pleasure, human rights, dignity, freedom, transformative justice, peace."

Science fiction and fantasy provide a blueprint for rethinking the end of the world and while there are many stories to look to, there are three that have fundamentally changed how I think about the end of the world: N.K. Jemisin's Broken Earth Trilogy, Vita Ayala and Emily Pearson's The Wilds, and Kameron Hurley's The Worldbreaker Saga. These all also happen to be books I've read or re-read during the pandemic, so they're all front of mind.

Each of these works of fiction takes place in worlds that are broken and breaking, worlds that require a new path forward. These stories follow the destruction of the world we know (or ones like it) and how humanity scrambles in the aftermath to create better structures, only to find those systems reify the power differential of earlier societies. Thus, the protagonists of each story must fight yet again for a more just world.

While the entirety of these works should be read and savored by any science fiction and fantasy lover, for the sake of our conversation, it is their endings that are most relevant, which is apt given that we're talking about endings in the first place. 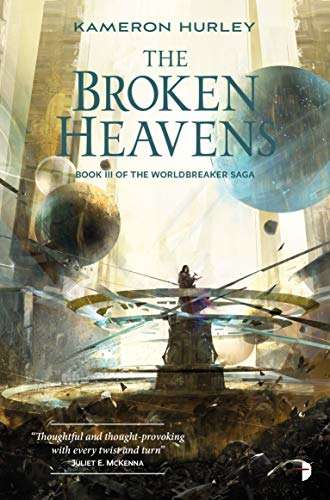 Spoiler Alert: I'll be speaking mostly in generalities and all of these works have been out for a while, but just in case you haven't finished reading them all, be forewarned there are minor spoilers to follow.

In each of these works, hope plays a huge role in how the endings unfold. In the Broken Earth Trilogy, Essun hopes she can reach her daughter and believes that if she does, she can heal not just their family, but the world. In The Wilds, Daisy and Heather decide to leave the human compound to enter the world of the Abominations, wanting to take a risk on themselves, rather than on a corruptible group of people who have betrayed them. In The Worldbreaker Saga, Lilia is guided by her thirst for revenge and dooms everyone in every dimension to death, but then she gets a chance for a do-over, a chance to make a better decision, and she decides not to be guided by vengeance, but by love — not by knowing what has happened, but by hoping for what is yet to come.

These are heavy books filled with themes of gender, sexuality, abuse, race, disability, systemic discrimination, individual hatred and bigotry, political power, people power, and so much more. So, when I share these brief summaries of the endings, know that these are hard-fought wins. All of these books set up dismal scenarios that seem like they can only lead to destruction and depressing endings, but each of these creators works to realistically bend their narratives toward justice, toward hope.

By ending in hope, these books suggest we too should have hope when facing an ending — not a puerile form of naïve hope, but true hope which recognizes the work, pain, sacrifices, and fight ahead. What we most need is a hope that views an ending as a rebirth.

What if our America is not dead but a country still waiting to be born? What if the story of America is one long labor?

What if all the mothers who came before us, who survived genocide and occupation, slavery and Jim Crow, racism and xenophobia and Islamophobia, political oppression and sexual assault, are standing behind us now, whispering in our ear: You are brave? What if this is our Great Contraction before we birth a new future?

Remember the wisdom of the midwife: "Breathe," she says. Then: "Push."

Fictional characters can quite literally participate in the endings and rebirths of whole societies and worlds in their lifetimes. Essun reunites the moon with the earth and stabilizes her entire world, dying in the process, but providing a newborn world for her daughter. Daisy and Heather survive the zombie apocalypse and the men that would turn them into baby farms in the wake of it, fomenting a revolution of people power against dominant forces. Lilia uses her mystical gift to return the worlds to how they were meant to be: as one. In each of these cases, the worlds these characters live in are never the same because of the choices these characters make.

Maybe we can't help the moon return to orbit around the Earth or fight zombies or even reunite all of the parallel dimensions, but we can participate in the world's rebirth. We can engage in organizing, donate, protest, and fight back. Each and every one of us has a moral responsibility to partake in reshaping the world because the world that is emerging won't innately be "better," if we don't make it better.

In some senses, the world is ending, but it's a hopeful ending—an ending that leads to a beginning. And Kaur, Jemisin, Ayala, Pearson, and Hurley tell us we should take heart and have hope in the face of the ending, but it should be the person giving birth to hope: the hope of hard work, pushing, and welcoming a new life into the world.