On March 30, 2001, humanity learned we were not alone in the universe… and that we were in the crosshairs of the ruthless, relentless Irken Invaders. Well… the crosshairs of the most overconfident and least-skilled of Irken invaders. Specifically, a bug-eyed, antenna sporting, green-skinned, over-emphasizing invader named Zim.

Tomorrow marks the 20th Anniversary since the poorly-disguised alien — with help from his equally poorly-disguised and possibly insane robot sidekick Gir — attempted to conquer our planet. And it went quite badly, as he understood very little of our society. He was thwarted occasionally by conspiracy-loving Dib Membrane and his sister Gaz, but most often by his own incompetence and the weirdness of our world itself. So let’s take a moment to look back at Invader Zim, 20 years after the first invasion.

Invader Zim was the brainchild of comic book creator Jhonen Vasquez, and Nickelodeon took a chance on this bizarre but lovable series by commissioning 13 episodes for a first season, which eventually totaled 2 seasons, 27 episodes, and a Netflix movie by the show’s end. A few days after the premiere episode aired, Steven Oxman of Variety gave it a relatively favorable review, claiming, “The cartoon captures a nice blend of the innocent and the satirical and should appeal to Nick’s core audience of youngsters and early teenagers.”

Indeed, the pilot episode expertly set up the series, with Zim (voiced by Richard Horvitz alternating between insecure and demonic) and hapless robot Gir (Rikki Simons) infiltrating a suburban neighborhood and then a ‘Skool,’ only to be discovered by Andy Berman’s Dib, whom no one believes. The show sunk its hooks into the culture’s mind shortly thereafter and paved the way for what has definitely become a cult classic. In the years that followed, despite a lack of actual new Invader Zim episodes, there have been action figures, two major conventions, comic books, and a plethora of merch.

On that epic evening back in 2001, Nickelodeon held a premiere release party at a club in swanky Glendale, California. "I don’t remember much from the night besides Rikki Simons, the voice actor for Gir, having his foot crushed by someone and ending up in a cast," Vasquez tells SYFY WIRE about the night. "The show was being projected around the place, but it was too loud to really pay attention, but I do recall thinking how strange and surreal it was to see this thing from my imagination on actual television finally. It’s STILL strange to me, I think."

That day would lead to many ups and downs with the show, from inconsistent schedules, to large gaps between episodes, but like all things that eventually enter the realm of cult classics, it struck a nerve with fans. Communities began to grow around Invader Zim, especially as the era of social media began. These fan groups, adamantly committed to the show, had a hand in the continued and lasting power of the property.

Johnny O’Hern was one such enthusiast who got involved with Operation Head Pigeons (OHP), a social media movement almost entirely run by high school underclassmen, formed after the series ended by like-minded fans with a goal of supporting an Invader Zim revival so long as it was on Vasquez's terms. "During the premiere … the full episode had me enraptured," O’Hern, whose online handle is "CB Johnny," remembers. "I would never pass on an episode … and gradually identified as a proud ‘Zim nerd.’ The irony wasn't lost (on me) at 10 years old how this bleak dystopian sci-fi horror infused Nicktoon comedy was being treated with the same reverence as Star Trek."

O’Hern recounts the many ways the fan community has kept the show alive, from earning support from cast and crew, to organizing a fan letter event called “Project Massive,” to getting exclusive sneak peeks for Zim web games, and even guest judging a Nickelodeon-sanctioned Invader Zim Tee Design Contest. And they brought the whole fan letter-writing campaign into the 21st century. “Instead of the outmoded method of sending ‘stuff with letters’ to save the show, we raised $1,127 dollars to the Toys Of Hope charity in Nick's name. Donors at InvaderCON2 (the second official Invader Zim convention held in 2012) were given eye-catching Invader Zim-themed envelopes for their letters.” But did it work? “Sure, we got Nick interested ... and that's all that mattered in the end. … We wanted new Zim only on Jhonen's terms. No exception. But the comics and movie some years later were a really pleasant surprise.”

Vasquez has never shied away from his fans. Like many creators, he does feel a connection to them, and with social media, can interact to a comfortable degree, although the past year has taken a bit of a toll on everyone. “I still use things like Twitter and Instagram so there’s a certain amount of interaction,” Vasquez says. “But things feel even more remote what with the plague making conventions a thing of memory. Conventions, love them or hate them, were where it would really hit me that there were people out there who have things in their heads that came from my head, people who actively LIVE with these characters and worlds in a way. Just like seeing my show on an actual television back in the day, the thought of an audience is awesome and fascinating and horrifying in varying amounts.” 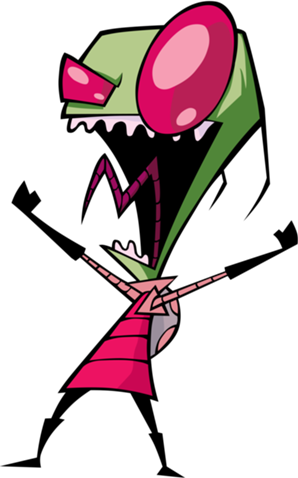 O’Hern says the fanbase is still going strong, mainly because of the positive community mindset. “Be neighborly to the other fan projects. Contribute to their stuff and maybe they can return the gesture if there's a good fit,” he says of most Invader Zim fans’ outlook. “The great news is that on top of new action figures and a new format of InvaderCON experiences, the comic books appear to have had a healthy enough response that it could end when Jhonen wants to end it.”

As for Invader Zim’s lasting power, Vasquez believes it all comes down to the personality of not just the main character but the show itself. "The shrieking, nightmare squealing nature of it," he says. "I think it strikes a chord the way a person strikes a chord, a person that doesn’t just blend into the noise, but makes a noise all its own that an audience either loves or hates, leaving very little middle ground. I assume that because that’s the kind of thing I love and I always hope to succeed on at least that level, to make a thing people love and appreciate for how not bland it is or hate with a passion. Passion is great."

It has officially been two whole decades since the bumbling green invader first graced our television screens. As to what all this actually means to Vasquez, he has to say: “It’s odd. To me it’s not a big deal at all ... People talk nonstop about nostalgia whenever something from long ago is involved, but as the creator of the thing in question, it’s just life. It’s my life and it’s a place with characters in it that never gets old or increasingly distant. It’s as accessible and present and current as a thought, really.”

Looking back, Vasquez feels a great sense of pride for what was unleashed onto the world. But when asked if he could go back and do it differently, he says “It’s hard to look at it from that point of view. The show stuck in people’s brains for a reason, and I have to think that every aspect, flaws and all, make up the identity of the thing, the identity that makes it IT to people who still keep the show alive in some way.”

As for this 20th Anniversary, Vasquez has, “less plans and more like ceremonial obligations.

"I always drive out to that strange sinkhole in the desert where I first met the creature that granted me the power to have an animated series in exchange for its 'food,'" he continues. "I imagine I’ll do that again this year, but I do sometimes entertain thoughts of just not going, of breaking the cycle. I’m so tired.”