R.I.P. Allen Bellman: Never miss a chance to say 'Thanks' to your heroes

One of the last surviving Captain America artists from the earliest days of Marvel Comics, back when it was still called Timely Comics, Bellman passed away at the age of 95. A fixture on the Florida comic convention circuit, along with his wife Roslyn, he was renowned for his graciousness and affability. He was also one of the last living links to the Golden Age of Comics.

Bellman was there in the nascent days of comics, landing a job as a teenager at Timely to help continue the Captain America comic after its creators, Joe Simon and Jack Kirby, had left. Imagine being 17 years old and getting hired to follow Simon & Kirby! At first doing the backgrounds for Syd Shores, he would go on to pencil and/or ink Cap for more than a decade, and then … he quit. Bellman saw the proverbial writing on the wall in the early 1950s as superhero comics lost their luster and left the industry.

He wound up in graphic design and spent years working for the Sun-Sentinel newspaper in Florida and became an award-winning photographer. Comics historian Mark Evanier explains in his blog how the proliferation of comic cons helped fans rediscover Bellman and his place in comics history. And he loved it. He reveled in the attention of the fans, and why wouldn’t he? This is a man who had left that career behind decades earlier, only to find a new generation of fans wanting to talk with him and hear his stories. 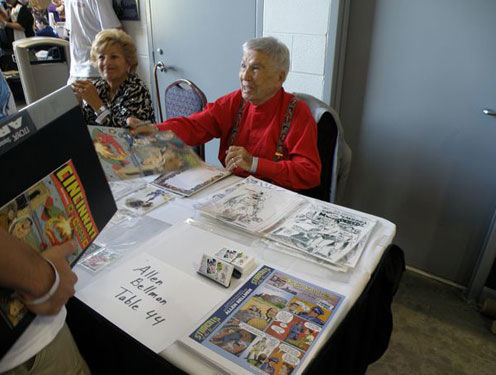 And the stories he could tell! As Brad Meltzer said on Twitter, Bellman understood the value of history. This guy lived through plenty of it. He was a contemporary of the giants upon whose shoulders comics were built, like Jack Kirby, Will Eisner, Joe Simon, Stan Lee, Bill Everett, Mike Sekowsky and Dick Ayers. How many guests at a comic con in 2019-20 could you point to and say that about? Ramona Fradon may be the last survivor of that era still making public appearances.

When I started going to conventions, I was always focused on the modern-day writers and artists I was obsessed with at the time. I took for granted the old-timers who would be sitting at the tables off to the side of the exhibit hall with stacks of prints and non-existent lines. As I got older started talking comics for a living, I became wiser to the true treasures of cons: the old-timers. They were the ones who knew where all the bodies were buried, metaphorically speaking.

If you've ever read Michael Chabon's transcendent novel, The Amazing Adventures of Kavalier & Clay, part of the great joy of that book is how the author makes the reader feel as if he's sitting at the drawing table right next to Joe Kavalier. The detail is striking. Those carefully-worded details came from interviews Chabon did with surviving Golden Age creators. I remember reading an interview that noted how bemused Will Eisner and his wife Ann were by Chabon's questions; he seemed more interested in learning about the food they ate and the pencils they used back in the 1940s than any specific questions about The Spirit. Those creators from the early days provide something that is invaluable to understanding history: Context.

People always tell kids to make the time to talk with their grandparents. Hear their stories. Because when they're gone, that will be how their memories live on. I wish my girls had spent more time asking their grandma, my mom, about her childhood in Cuba. Hell, I wish I had asked her more about those days. I always planned to. You always think you'll have more time. Until you don't.

I remember seeing Bellman in Artists Alley at Florida Supercon a few years ago. I had planned on circling back to talk with him. After all, he drew Captain America in the Golden Age! I had some great questions to ask him. Alas, I was not as wise as I thought I was. I got sidetracked scouring the convention floor for original art, talking to others, and distracted by all the other things that tend to distract you at a con. I never made it back to his table. That was the last time I saw him at a show. 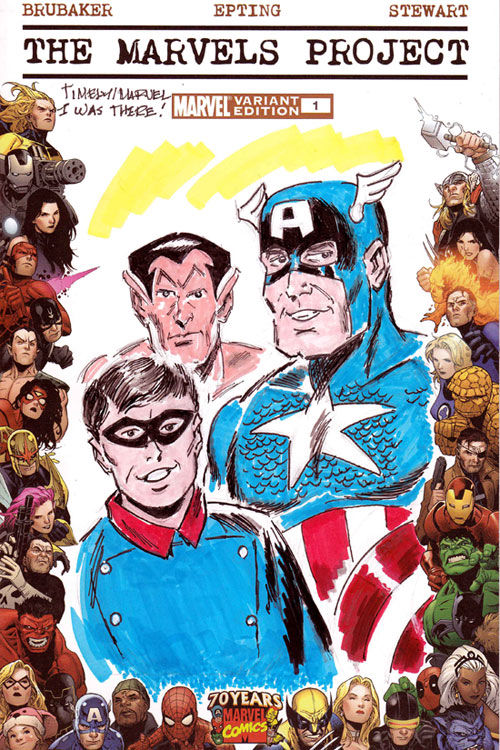 Thankfully, others did. And I bet the stories were glorious.

Tell me about a memorable convention encounter you've had with a comic book professional. Comics fans are so lucky to have such intimate access to the greats of the industry; i'd love to hear which writers and artists made great impressions on you. Hit me up on Twitter/Facebook/Instagram and let me know.

And here's your weekly reminder that Behind the Panel is a multi-platform series, as well. Our video series is chock-full of my in-depth interviews with amazing comic book creators. The Behind the Panel podcast is an audio documentary series that provides unique insight into your favorite creators and stories. Check 'em out, we think you'll enjoy them.