Few Star Wars characters have ever generated as much allure out of as little screen time as the Knights of Ren. They appear in only one shot of Star Wars: The Force Awakens, an apparent flashback to Kylo Ren's victory over the light side after a confrontation with his old master, Luke Skywalker. Before that, they get one vocal reference in the film, when Snoke refers to Kylo as "master of the Knights of Ren." It's not much, but it was enough to generate a starship full of fan speculation about the Knights, who they are, and what they want.

The Last Jedi skipped over the Knights, but anticipation built when we learned they'd have an actual role to play in Star Wars: The Rise of Skywalker, where director and co-writer J.J. Abrams would finally get a chance to give his creations a little action. Between helping Kylo Ren hunt for Rey, capturing Chewbacca, and fighting Ben Solo at the end of the film, the Knights do actually get a good deal to do in the film, but in the process we learn virtually nothing about them. We get a better look at their weapons and armor, and even learn they have a resident armorer and their own ship, but that's about it. The mystery, the allure, and the darkness surrounding them all adds up to little more than henchmen in the end.

As is almost always the case with Star Wars these days, though, the film is only part of the story. The Knights of Ren do actually contain plenty of dark side intrigue and danger, and they actually are formidable warriors in their own right. You just have to turn to the film's tie-in books to find all of that out.

Star Wars: The Rise of Skywalker - The Visual Dictionary by Pablo Hidalgo lays out a lot of detail about the Knights, including their individual names and methods and a detailed breakdown of their weaponry, but it's what that book has to say about the Knights as a whole that might be the most interesting aspect of their personas. Their legend begins out in the Unknown Regions, the book tell us, where "local folklore has warned for centuries of marauders known as the Knights of Ren." This casts the Knights as players in hundreds of years of dark galactic history. Are they part of an order that's persisted in the Unknown Regions for so long that perhaps even the Jedi Order at its height didn't know about them? Are they a group of con artists using names from fairy tales to strike fear into the hearts of their victims? We don't know, but when we first meet them in Marvel's The Rise of Kylo Ren comic they certainly feel like the real deal.

In The Rise of Kylo Ren #1 from writer Charles Soule and artist Will Sliney, the Knights first appear in a flashback set "Long Ago." In this earlier incarnation, they are led by a man covered in scars wearing a nearly blank mask who calls himself "Ren," though he notes that is not his given name. In that issue, Ren and his Knights are on something of a recruitment mission, because they've heard about a young killer who can "touch the Shadow," as they call it. It's in the midst of this mission that Ren lays out the philosophy that guides the Knights. 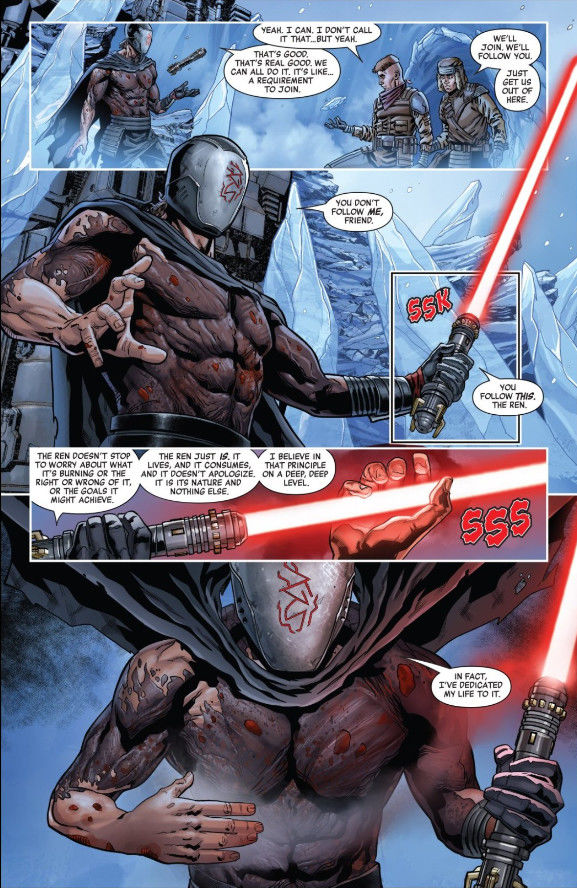 Ren notes in the same issue that every member of the Knights can "touch the Shadow," which means they're all Dark Side users to varying degrees, something the Visual Dictionary also confirms, while noting that their limited abilities would have also made them good candidates to be Imperial Inquisitors once upon a time. In The Rise of Skywalker #2, during his battle with the Knights, Luke Skywalker notes that they "use the Dark Side like a hammer."

That sense of blunt, unhoned power seems to be a key part of the visual and philosophical approach of the Knights. They are not concerned with advancing themselves as students of the Force. They are not concerned with pledging themselves to any particular side — The Visual Dictionary also notes that they only follow Kylo Ren, and will not listen to any First Order commanders — or any cause other than their own. The Knights just are, marauding through the galaxy and taking what they want.

This carries over into their overall look as well as their weapons, as each of the Knights carries their own particular set of tools to maximize fear, intimidation, and effectiveness in battle. The Visual Dictionary also offers names that we can finally match to those individual helmets. There's Vicrul, with his gridlike facemask, scythe, and penchant for using the Dark Side to heighten his opponents fear. There's Cardo, with his arm cannon and blaster aimed at deliver duel-wielding fury at as large an area as possible. There's Ushar, with his dented helmet and massive studded club. There's Trudgen, with his massive blade augmented with ultrasonic technology for extra cutting power. There's Kuruk, with his long distance rifle and helmet that limits his peripheral vision to maximize his focus. And finally, there's Ap'lek, with his skeletal mask and ancient Mandalorian pole axe.

Each Knight's weaponry and armor tells the story of the path of destruction they've cut. Trudgen, for example, has part of an Imperial Death Trooper's helmet grafted onto his own, to let the world know he killed one of them once. Some of them prefer ranged weapons and others prefer to fight up close, but none of them have simply picked up a weapon and adopted it without some kind of modification first. It's all customized to fit them, often crudely so, and that gives the Knights a sense of handmade horror that the gleaming Praetorian Guard just didn't have. They're here to do a lot of things, but looking nice in uniforms isn't one of them.

So, we can glean from all of this that the Knights are — or were, as the case may be — an order of beings who really only care about destruction and consumption, and they may have been doing that for hundreds of years. What we don't know yet -- and what adds even more mystery to their group — is why. It makes sense that a Force-sensitive criminal would want to join their ranks and hide behind a mask and a new identity now, but how did it get started? What is "The Ren" and how does it differ from the Dark Side? Is it all just smoke and mirrors to scare people into taking them seriously? We don't know, but we hope there's more to the story that we'll see in later expanded universe releases.

Though their life on the big screen was brief, the Knights of Ren add a layer of rich dread to the world of the sequel trilogy, as long as you're willing to do a little extra reading.