R.L. Stine's back, baby! The famous YA author behind the successful Goosebumps and Fear Street series, has locked down a three-book deal for a trilogy of books based on Topps' Garbage Pail Kids trading cards. The first publication, Welcome to Smellville, will be released by Abrams’ Children’s Books this fall.

Set in the titular town of Smellville, the book follows characters like Adam Bomb and Brainy Janie, just two of nine kids who "all live in a big tumbledown house and have as much fun as they possibly can," reads the Abrams description. "People may think that they’re gross and weird and strange, but they’re not bad kids — they just don’t know any better." The young protagonists get into all sorts of hijinks at their middle school "while battling bullies and their archenemies, Penny and Parker Perfect."

“The Garbage Pail Kids are ghastly, loud, messy, out of control . . . out of their minds. In other words, MY kind of kids!” Stine said in a statement provided to Entertainment Weekly, which first broke the news. “I’m hoping to create a book series that captures all the loopy slapstick fun of these uniquely awful characters, to get all middle-grade kids reading — and laughing.” 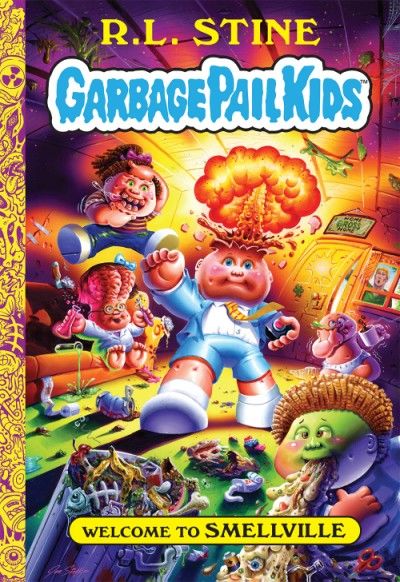 Joe Simko has been tapped for the cover art (seen above), while Jeff Zapata is handling interior illustrations. Both Simko and Zapata have an established history drawing for the Garbage Pail brand. The books will also come with four exclusive sticker cards, one of which depicts a Garbage Pail version of Stine known as "R.L. Slime."

A lampoon of the Cabbage Patch dolls, the Garbage Pail franchise dates back to the mid-1980s. Starting as a line of trading cards and stickers, the IP launched an entire franchise of diversified merchandise and even led to a poorly-received film adaptation in 1987. The titular kids are pretty gross and macabre, their signature artwork featuring provocative imagery that calls to mind other hot sellers for Topps: Mars Attacks! and Wacky Packages.

Welcome to Smellville goes on sale Sep. 15. You can pre-order a copy right here.

It's a fan thing
Join SYFY Insider to get access to exclusive videos and interviews, breaking news, sweepstakes, and more!
Sign Up for Free
All Posts About
News
Abrams Books
Garbage Pail Kids
Goosebumps
R.L. Stine
books
You May Also Like
Recommended by Zergnet
Latest on SYFY WIRE

How much will Dean be in 'The Winchesters'?