That spooky Halloween season is here, and it's got nostalgic '90s kids thinking about a debate that raged in the schoolyards way back when: Which scary '90s kids TV show was better: Are You Afraid of the Dark? or Goosebumps? If we're being honest, AYAOTD, but Goosebumps scribe R.L. Stine wrote another series of horror books that might have been the spookiest teenage TV show of the decade had they been adapted for the small screen: Fear Street.

These compact, serialized murder mysteries about sexy teenagers and the haunted Shadyside, a town filled with more death and natural redheads than one could comprehend. They were dark, delicious, and full of twisted betrayal. Siblings turned against each other, girls stole each other’s boyfriends, money turned kids evil, and there may or may not have been legit ghosts, witches, a haunted street, and other supernatural weirdness.

While a trilogy of Fear Street movies is set to kick off in the summer of next year, those films can't make up for the missed opportunity. Here are five Fear Street books that were so juicy, so dramatic, and so spooky that they made Beverly Hills 90210, Melrose Place, and Buffy the Vampire Slayer look like pristine boarding-school dramas filled with stable, kind-hearted kids doing charity work in exchange for cookies! 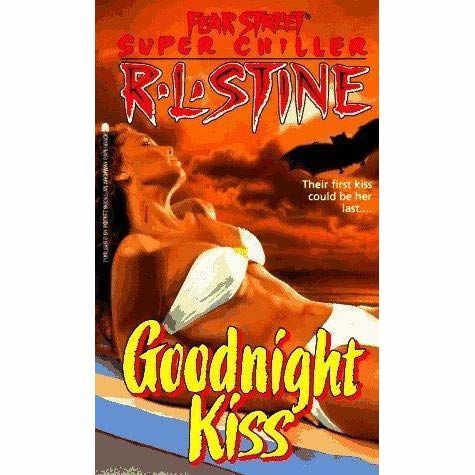 It's crystal clear from the way R.L. Stine writes that he was a screenwriter before making his mark writing into children's horror. The man literally stages out everything. Body language, physical poise, clothing fashion, and mean-faced snark-glares are all spelled out with aching clarity. And sometimes, the effects border on comedy. Stine also has a (seemingly) careful balancing act on whether or not supernatural beings truly exist on Fear Street, or if the narrator of the day is bat-plop insane.

Enter Goodnight Kiss, the story of a young couple named April and Matt on vacation (with their families because hi, 16 years old) in some beach town. The town, wouldn’t you know, is an unabashed nesting ground for what else — sexy teenage vampires! And boy oh boy, would this tale of seduction and drama have been ahead of its time on television!

Join tall, lean, dark-haired, pale-skinned, flashing eyes, moody vampire Gabri as he competes against the luscious, curvy, red-haired, full-lipped, sweet canned, femme fatale Jessica to see which of them can turn April or Matt into a vampire first. This book was published in 1992, and if it had been a TV show at that time, it would have put Twilight to shame! Or it could have gone head to head with the 1992 film version of Buffy the Vampire Slayer to see which bloodsuckers reigned supreme!

What do teenage girls do on any given night of the week? Why, sit around in lingerie style nighties and prank call boys over the phone with cooing, honey dripping voices, of course!

The Wrong Number tells the story of best friends (and teenagers, duh) Deena Martinson and Jade Smith. Deena is a painfully shy, delicate little thing who has short blonde hair, and whom everyone says looks like a pixie. Jade, on the other hand, has piercing green eyes, full lips, and tumbling tresses of auburn hair. (Stick with me, I wasn’t kidding about the number of redheads in these books. It’s astounding.)

Deena’s step-brother Chuck comes home from juvie, and he tries to teach the girls how a man makes a real prank call. They end up dialing a number on that spooky-spooky run-down slum, Fear Street, and the call is answered by a woman whose husband is in the process of murdering her. Now, weird things are afoot in Shadyside and no one knows if the murdering husband Farber from the phone call is after Deena and Jade, or if step-brother Chuck is messing with them.

The book ends with this wild scene of the girls inside the murderer’s house, with him dangling the girls from windows, knocking one of them unconscious (no brain damage of course, or blood), and a chain saw cutting a tree down. All I know is that this story is so clear in Stine’s head and I just want to be a fly on that frontal lobe so I can see these visions, too.

The Secret Bedroom would have made a particularly good episode of television because it would have completely confused its viewers. The existence of the supernatural in Fear Street books was often (although not always) unclear. Frequently, supernatural occurrences ended up being figments of a less-than-mentally-stable narrator’s imagination.

Thus begins The Secret Bedroom. Lea Carson is a lonely girl and a newbie at Shadyside High. Within her first week at school, she spilled chili all over Marci Hendrix’s white sweater. Marci, in traditional Fear Street form, has flaming red hair and is mean to the core. Drama ensues when Lea accidentally develops a crush on a dude named Don and no surprise — he’s already hooked up with Marci.

In a sad state of isolation, Lea starts hearing sounds from her attic and finds it is boarded up. She removes the boards and then discovers a ghost named Catherine. The rest of the story of Lea and Catherine’s relationship is really sort of touching, somewhat haunting, and all-around maniacal. It’s never clear throughout the entire story if Lea has internal mental issues, or if she is really being haunted/taken over by a ghost. The final scene in the book hints that maybe this wasn't just an off-kilter account by an unreliable narrator, and there was a true haunting at work. 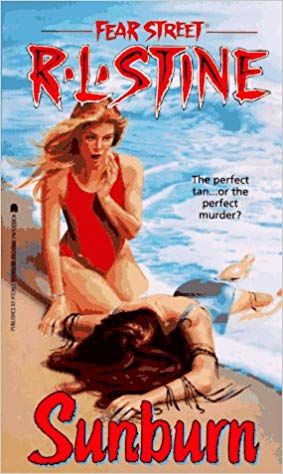 Four teenaged girls who were bunkmates last year at summer camp are about to have a reunion that will end in a blistering good time. And no, not those kinds of blisters, but like… a sunburn on your face.

The story is a whodunnit sort of mystery, as it begins with Claudia — who has been invited along with some other former bunkmates to stay at their rich friend's house, sans-parents — waking up on the beach, buried to her neck in the sand, with the tide coming closer. She legitimately might drown; her throat is parched and her face is severely burned. She’s freed by a young man named Daniel (totes sexy, of course) and we follow her back to the summer house where the other girls had no idea she was still left on the beach. I mean, she fell asleep in a hole — how could she not just dust herself off from that one and head back in time for Degrassi or whatever teenagers watched in the mid-'90s?

The events only get crazier from there. Worms in Joy’s salad. Sophie getting shocked by an electric fence. Claudia getting a dog sicced on her, leg chomped on, and sent out to sea for sharks to eat. And learning of Marla’s spiteful, crazy sister named Alison that the girls watched die at summer camp the year prior. It’s just layer after layer of betrayal and teenage angst, culminating in the vilest physical description of a corpse my ten-year-old brain had ever read.

How cool would it have been to get to see a 90210 cast member, Melissa Joan Hart, or Andrea Barber get to expand their acting chops getting to take part in a series like this?

Sixteen-year-old fraternal twins Josie and Rachel decide to go horseback riding one day. And get this — Josie has short dark hair and big, flashing eyes while Rachel… wait for it… has Long. Red. Hair. They invite their friend Melissa who drives a cool Firebird and their little sister (two years younger) Erica who is more or less described as a thick dumpy mess. Anyone familiar with Stine’s writing should know that this is instant knowledge that something is up with Erica.

During the girls’ outing where they’re talking about boys and how quickly Josie shuffles through them, Rachel is thrown from her horse, lands on the head with a sickening crack (that beautiful red hair is far too pretty to cover with a helmet) and is afflicted with permanent brain damage. From there, the story is just this unparalleled whirlwind of boyfriends, ex-boyfriends, the girls switching off who is dating who, who is dating whose boyfriend, disturbing valentines sent to Josie, who now wants nothing to do with her special needs twin, Rachel’s disturbing childish giggles over a newly installed intercom system (totally not there for haunted horror imagery or anything), and Melissa coming out at the end as the hero of the book.

The story is one of the few R.L. Stine books to end in a suicide, where Erica and Melissa break through the ice on a cold, frosty lake. Melissa is pulled out by her boyfriend (formerly Rachel’s of course) while Erica lets a layer of ice form across the top of the lake, floats to the top, and makes no effort to get out. Can you just imagine how cold, blue, amazing, and darkly beautiful that shot could have been? She would have been played by Paige Moss, the girl who played Tara in 90210 that went all psycho on Kelly. This is a story we need on TV! And if there really was a Fear Street TV show, every red-haired girl in Hollywood would have a job for at least a decade or two.

All Posts About
Features
TV
Goosebumps
R.L. Stine
fear street
lists
You May Also Like
Recommended by Zergnet
Latest on SYFY WIRE