She’s no stranger to showing up in streaming TV series set in the world of the comics, even if she’s usually there to lend a hand as a supporting character like Claire Temple, Daredevil’s ever-patient nurse. But now Rosario Dawson reportedly is getting set to step straight into the spotlight as the star of DMZ, the upcoming pilot bound for HBO Max based on DC's Vertigo comics series of the same name.

Via The Hollywood Reporter, Dawson has signed on to play Alma, a “fierce medic” and Manhattan mom who’s on a desperate search for her lost son. “As she contends with the gangs, militias, demagogues and warlords who now control the lawless island,” the report describes, Alma “becomes the unlikely source of what everyone there has lost: hope.” 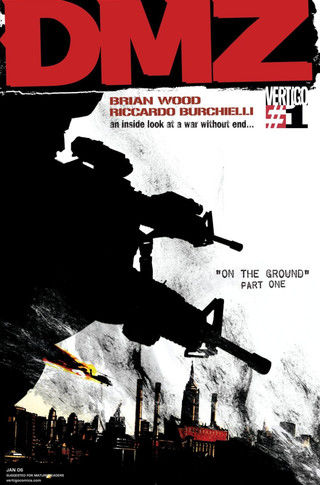 Set in a dystopian, near-future version of New York in which Manhattan Island is a lawless zone — the literal namesake “DMZ” that gives the series its name — the DMZ comics come from writer Brian Wood, with art from Wood and Riccardo Burchielli. With both sides in a second U.S. Civil War pinching either side of Manhattan in their grip, the island serves as a lawless territory separating the United States and its secessionist offshoot, the Free States of America.

While only a pilot has been ordered, HBO Max appears to have the pieces in place to move forward if the pilot indeed spawns a full series order. Via Warner Bros. TV and her Array Filmworks company, Ava DuVernay (Selma, A Wrinkle in Time) is already set to direct as well as co-executive produce the pilot, with Westworld executive producer Roberto Patino reportedly serving as the pilot’s showrunner.

There’s no early word on when DMZ might enter our home-binging zone with a premiere date, and there’s still plenty of casting news yet to come. HBO Max is set to launch sometime this spring. You can catch Dawson as Claire Temple in Netflix’s now-defunct (but still streamable) lineup of Marvel shows, as well as motel owner Nevada in Zombieland: Double Tap.

It's a fan thing
Join SYFY Insider to get access to exclusive videos and interviews, breaking news, sweepstakes, and more!
Sign Up for Free
All Posts About
News
TV
DMZ
HBO Max
Rosario Dawson
Related Stories

The Green Lantern, a Gremlins prequel, & more: All the original genre fare on HBO Max