There are many different ways to reinvent the origin story of a comic book character. Sometimes creators go whole cloth with it, writing entirely new stories that reframe events that led how to a certain superhero became the way they are. Others take the more subtle route, adding in things like new villains pulling the strings behind the scenes. Then there are the even more subtle changes, the ones that don't alter what happened at all, but change how it happened in such detailed ways that we have to totally rethink certain aspects of a character.

That extremely subtle reworking has apparently happened in this week's Savage Avengers #4, in which one small moment makes a big change to how Frank Castle became The Punisher.

**Spoiler Warning: There are spoilers for Savage Avengers #4 below.**

The issue, from writer Gerry Duggan and artist Mike Deodato, features the titular superteam, which includes the Punisher, battling against Kulan Gath, an evil wizard who's traveled from Cimmeria (because Conan the Barbarian is also on this team) to modern-day Earth. At one point during the battle, Kulan Gath reaches inside Frank Castle's mind to peek at his inner darkness, and because it's Frank Castle, that takes the form of his memories of the day his wife and children were gunned down by the mob. Various versions of the Punisher's origin story paint this scene a little differently. Some make it a deliberate hit on the whole family that only Castle survives; others make it an issue of Frank's family simply being caught in the crossfire and dying as collateral damage. In this version, though, it's not about why the bullets are flying, but what Frank himself does when he hears gunshots. Check it out. 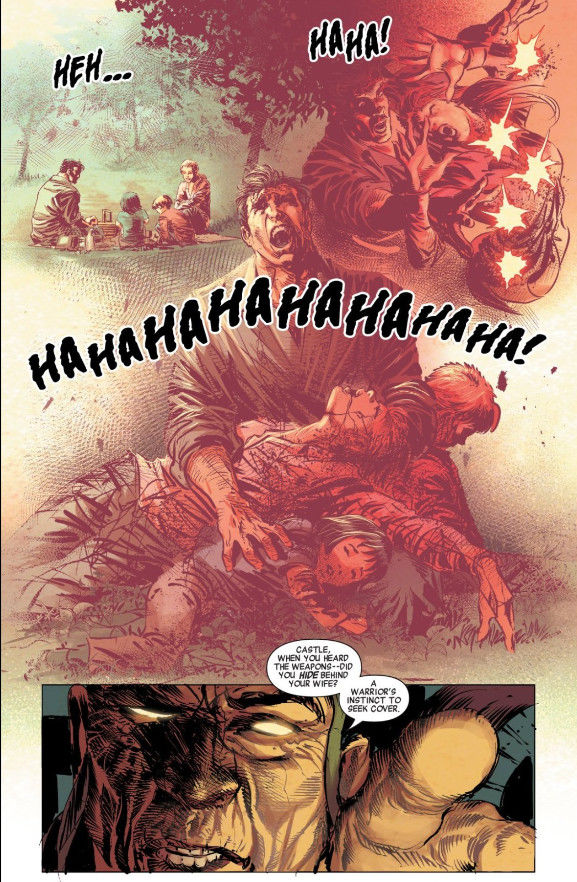 Now, could this be Kulan Gath simply messing with Castle, getting inside his head at a crucial moment in a fight? Sure, but check out Frank's reaction in three panels on the very next page.

That doesn't seem to be the reaction of someone who believes what his enemy is saying to be completely false.

There's lots to unpack about this, and it all goes into a bin with the other layers of recent context that have been added by various writers to the Punisher as a character in the 21st century, so let's try to parse it. Frank Castle is a veteran of war, a man who came home with no small amount of trauma tied to his experiences, and a man trained to survive a fight. It's entirely possible that his first instinct was to duck and cover, and that he inadvertently made his wife and children a human shield in the process. He might have been acting on instinct, and the instinct to keep himself alive to fire back overrode his instinct to protect his family, who he'd been away from for some time.

If that's what happened, it doesn't change that Castle's wife and kids were taken from him by criminals. It doesn't change his mission, but it does add an intriguing and horrifying new layer to why he's on said mission. If you felt, deep down, that if you hadn't made the wrong move in the milliseconds after you heard a gunshot, you could have saved your family, it would definitely eat at you, and in Frank Castle's case it could eat at him to the point that his merciless war on criminals is a mad pursuit of not only justice, but atonement.

It'll be very interesting to see if Savage Avengers follows this thread any further, or if it was just a brief moment meant to make us think a little more about Marvel Comics' most ruthless vigilante.

It's a fan thing
Join SYFY Insider to get access to exclusive videos and interviews, breaking news, sweepstakes, and more!
Sign Up for Free
All Posts About
Comics
News
Comics
marvel comics
the Avengers
the punisher
Related Stories

The Punisher, the real one, directly tells cops he's sick of them idolizing him