We're all well aware of Popeye the Sailor Man's penchant for the green stuff, so it follows that he'd give a big thumbs up to a crew of ambitious researchers who've taken ordinary grocery store spinach and transformed it into a renewable catalyst for the next-generation of clean fuel cells.

In a new study published last month in the online journal ACS Omega, scientists at the American University in Washington, D.C. took a detour around traditional platinum-based fuel cells and opted for the impressive potential of spinach's high density, energy-generating molecules for theoretical use in a variety of industrial applications.

Their proof-of-concept fuel cell is the latest development in a long history of scientists attempting to tap into the leafy vegetable as a carbon-based catalyst.

“This work suggests that sustainable catalysts can be made for an oxygen reduction reaction from natural resources,” lead author and American University chemist Shouzhong Zou said in a press release. “The method we tested can produce highly active, carbon-based catalysts from spinach, which is a renewable biomass. In fact, we believe it outperforms commercial platinum catalysts in both activity and stability.”

American University researchers hoped to discover an inexpensive and less toxic method to derive an efficient catalyst from by using available natural resources and Popeye's favorite perfectly fit the bill. 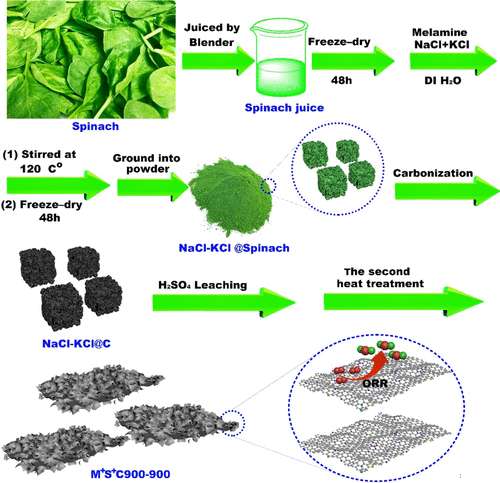 While there are multiples challenges and hurdles to overcome prior to spinach cells being deployed in actual real-life situations, the team's research definitively proved that the concept is highly viable, and could someday be rolled out in electronic devices, military gear, and metal-air electric car batteries.

"Even though we call them nanosheets, when they are stacked together, it's not like a stack of paper that is very solid," Zou explained. "We need to make it porous enough that all the active sites can be use."

Zou and his colleagues' work is the first official demonstration using spinach as a successful material for preparing oxygen reduction reaction-catalysts. Spinach is a prime candidate for this sort of reaction, due to its survivability in low temperatures, is readily available and easy to grow, and is a superfood rich in iron and nitrogen, which are essential for this form of catalyst.

Moving forward, the next phase for the researchers is to insert the catalysts from their recent lab simulations into prototype devices like hydrogen fuel cells, to monitor their performance and possibly develop more plant-based catalysts such as cattail grass or rice.

It's a fan thing
Join SYFY Insider to get access to exclusive videos and interviews, breaking news, sweepstakes, and more!
Sign Up for Free
All Posts About
News
Science
Popeye
Science
Related Stories