Shigeru Mizuki, the legendary manga creator and 'Yokai Professor,' finally gets his due

The way Japanese pop culture has permeated the US would be unimaginable to past fans, those poor late-20th-century kids who had nothing but un-subtitled nth-generation-copy video tapes of anime to pass around. So it’s surprising that one character who is familiar to basically every living Japanese is almost unknown here.

Gegege no Kitaro by Shigeru Mizuki is the subject of many volumes of manga, multiple animated and live-action TV series, two movies, and over a dozen video games. The main character, Kitaro, is a one-eyed boy whose weapons include remote-controlled geta (traditional wooden sandals) and hair that can turn into sharp needles and fly towards his enemy. His father is a talking eyeball, and some of his friends include a rat-man, a cat-girl, a walking wall, and a long piece of cloth that can fly and carry him through the air.

They're all yokai, based on traditional supernatural creatures that range from shapeshifting animals to anthropomorphic objects to odd humanoid monsters. Yokai have deep roots in Japanese folklore, but their current place in the culture owes almost everything to Kitaro's creator.

Mizuki started drawing Hakaba Kitaro, or "Graveyard Kitaro," in the 1930s for kamishibai, a form of street storytelling using a sequence of illustrations in a wooden frame. After kamishibai died out, Mizuki got into the new genre of manga, where he revived Hakaba Kitaro in the 1950s. These early versions of Kitaro were much darker, reflecting Mizuki's interest in American horror comics like Tales from the Crypt. 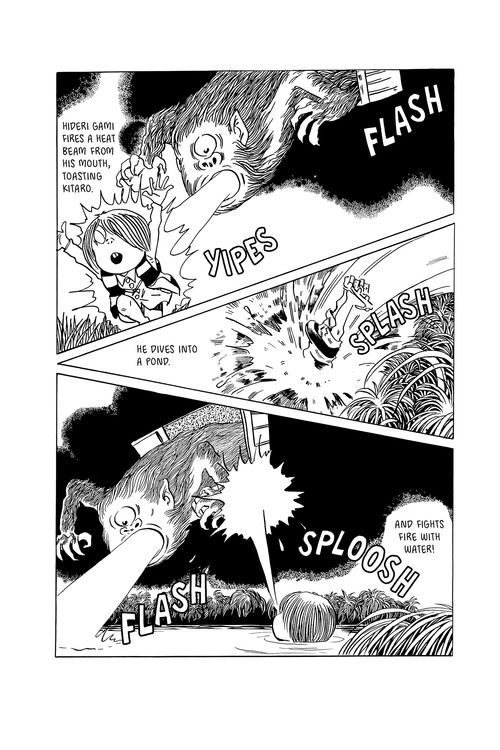 Hakaba Kitaro was far from an instant success — in fact, the concept flopped over and over as a struggling Mizuki kept convincing different publishers to try it again. But that changed after he had a huge hit with a different character, Terebi-kun, a kid with the power to enter TV shows. Suddenly, people were clamoring for his work for the first time in his life and Mizuki again shopped Kitaro around, this time to anime producers.

They insisted he had to change the title — never mind what the kids thought, sponsors were not going to want their commercials next to a "Graveyard!" He came up with Gegege no Kitaro based on his childhood nickname and turned his horror comic to something that took more cues from the popular superhero genre. Kitaro and his family and friends were now good yokai who defended humanity from bad yokai, and the resulting 1968 anime was an instant hit.

Mizuki (whose real name was Shigeru Mura) was born in 1922 and learned about yokai from his elderly nanny Nonnonba, who regaled him with the old traditional stories. This folklore was now fading from memory — and it wasn't just dying a natural death. During the modernization of Japan after it opened to the West in 1868 and again in the militarization of the early 20th century, traditional tales and folk beliefs were being actively stamped out.

“The government went on a campaign to wipe out local folklore and beliefs in order to replace them with state-controlled emperor worship,” says Zack Davisson, award-winning translator of Mizuki's work. “In manga at the time, the few folklore stories that allowed to exist were repurposed for propaganda." The folk character of Momotaro, for instance, was now represented as a hero fighting against monsters representing invading foreigners.

Mizuki not only revived yokai but put his own spin on them. “Mizuki loved monsters, so he brought in the concept that yokai weren’t something to be fought against," says Davisson. "Yokai were awesome. You wanted yokai on your team. You wanted to meet yokai.”

Now, Davisson says, you could compare his influence on how Japanese people see yokai today to 'Twas the Night Before Christmas author Clement Clarke Moore’s influence on how we see Santa Claus; his is the definitive modern Santa, even if we don't realize it. “His versions of yokai have become so much the norm that people are not even aware that it’s Mizuki’s version they know,” he says.

Even yokai that Mizuki invented are considered part of authentic folklore. And he did more than create stories about them — he did so much research into world folklore that he became known as the Yokai Professor. “He was considered the ultimate arbitrator of all things yokai," says Davisson. When the urban legend of Kuchisake-Onna, the Slit-Faced Woman, first appeared in the 1970s, it was Mizuki's word that made her part of the canon: “When Mizuki put her in one of his newest yokai encyclopedias, that’s when she was officially considered a yokai.”

Kitaro is now finally making inroads into the English-speaking world. Drawn and Quarterly published a fat volume in 2013 and followed that up with a more kid-friendly series of books translated by Davisson, with titles like Kitaro the Vampire Slayer and the Great Tanuki War. The current Gegege no Kitaro anime revival is also streaming on Crunchyroll. While produced after Mizuki's death in 2015 and updated so that some of the characters have cell phones and a new look, it retains his spirit and breadth, from episodes of social commentary last season to this season's through-story of an epic battle to save Japan.

Why has it taken so long? To understand that, you must understand his creator. Mizuki was much more than a successful manga author. "He wasn’t just an entertainer," says Mizuki. "He was a philosopher. An academic. He had such depth."

Mizuki's role in Japanese culture went far beyond cartoons. He lost his dominant left arm fighting in World War II and had to relearn how to draw. He wrote serious manga about the war and about the history of Japan in the 20th century. He also did more than write about his war experience. "He was an advocate for recognizing the needs of disabled veterans in Japanese society when previously to come home as a wounded veteran was a disgrace,” says Davisson.

Davisson says that Mizuki was seen by the Japanese as a kind of sage. "They loved who he was as a human being as much as they liked his comic books," he says. Mizuki was awarded one of the nation's highest honors, named a Person of Cultural Merit: “An official recognition that he is someone who contributed to Japanese culture — that it would be a different county if he’d never lived,” says Davisson. When Mizuki died, the emperor of Japan placed a wreath on his grave.

As someone so eminent, Mizuki was concerned for his legacy and had a clear idea of how he wanted his work presented. Many publishers had wanted to translate some of his work, but he refused. "He didn’t want people to just come through and cherry pick the hits,” says Davisson. "He was looking for a publisher that wanted to present him as a complete artist.”

He found that publisher in Drawn and Quarterly, which released Kitaro as well as Mizuki's major historical manga — even though, as Davisson observes, this can make him a bit of a marketing challenge: "It’s hard to sell to a western audience — 'Here’s Kitaro, and the same author did a biography of Hitler.’”

But even if you've never heard of him, Davisson says you're living in Mizuki's world.

“His influence is so ubiquitous that we’d be in a different world here in America if Mizuki had never lived. Anyone who plays Pokémon or watches Naruto, that’s all Mizuki’s world that he created and other people built on it after that.”

Long before Pokémon — some of which are in fact based on yokai — Mizuki was including "yokai files" in his Kitaro books that would list the stats and features of each yokai. These were later collected into Yokai Encyclopedias. "The Pokédex draws a straight line back to Mizuki. The idea of having a little monster buddy goes straight back to Mizuki," Davisson says. "That was stuff that just didn’t exist before he did it."

Remembering the most screwed-up, WTF moments of the original Yu-Gi-Oh! manga

Chosen One of the Day: Kakashi Hatake, romance reader