Something strange is about to be released in your neighborhood for Ghostbusters' 35th anniversary, so get set to be slimed with a sensational Ultra HD Steelbook home video offering from Sony Pictures.

The adored supernatural fantasy franchise is celebrating a milestone birthday this year, and there are tribute screenings, special comic books, and even a new Ghostbusters sequel in the works from director Jason Reitman, son of Ivan Reitman (who delivered the original two films), so prepare to party like it's 1984. 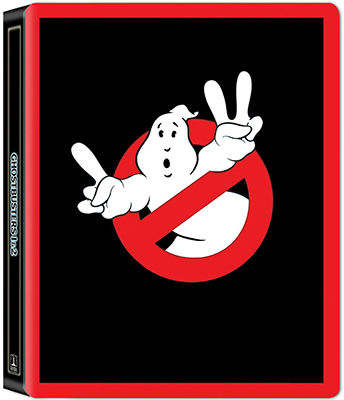 To add to the festivities, Sony has just announced that a sparkling new limited-edition Ghostbusters 4K Blu-ray Steelbook is slated to manifest itself on June 11, and Ghostheads around the globe will be strapping on their proton packs to try and procure one.

This awesome offering to spook-loving acolytes of the paranormal property will include the original 1984 Ghostbusters and its 1989 sequel Ghostbusters II (celebrating its 30th anniversary), all remastered in the crystal clarity of 4K UHD Blu-ray with HDR and Dolby Atmos audio. The classic pair will be suitably fortified with a treasure of haunting extras like rare archival footage, never-before-seen deleted scenes, fresh interviews and documentaries, trivia tracks, still galleries, trailers, and scarce promo material.

Inspect the complete rundown of special features included below, then tell us if you'll answer the call in June.

“A Moment With the Stars” – Original EPK Featurette

Who You Gonna Call: A Ghostbusters Retrospective

Original Stereo Audio for the Feature (Blu-ray only)

Time Is But A Window: Ghostbusters II and Beyond

“On Our Own” Music Video by Bobby Brown