There are more than a few Star Trek episodes that deal with time travel. Quite a few, in fact, especially when one takes into account that the Temporal Prime Directive instructs Starfleet officers not to interfere or do anything that could change history. But, thankfully for Captains like Kirk and Picard, some officers take such directives more as "strong suggestions."

Not all of Trek’s time travel shenanigans, however, involved messing with the historical record — Star Trek: The Next Generation’s classic episode “Cause and Effect,” for example, deals with a time loop, one where the U.S.S. Enterprise sadly and repeatedly gets destroyed until the crew susses things out.

Speaking of time, 30 years have passed since “Cause and Effect” premiered. To celebrate the occasion, here are 12 other great Star Trek episodes that have our favorite members of Starfleet getting entangled throughout time.

1. “The City on the Edge of Forever” (The Original Series, Season 1)

While later shows had their fair share of time travel, Captain Kirk and his crew also had more than one timey wimey experience. In “The City on the Edge of Forever,” Kirk’s crew stumble across a sentient archway that can send anyone to any time and place. An addled McCoy walks through it, followed by Kirk and Spock, and they end up on Earth in the 1930s. Their presence in the past changes their future, and the three have to untangle what happened, which ultimately involved Kirk falling in love with the woman who they ultimately must allow to die to set their timeline right. One of the first, truly great episodes of Star Trek, "Forever" puts Kirk and Spock in the middle of a no-win scenario, pre-dating Wrath of Khan: Kirk can either save his friend and the future, or the woman he loves. Not both. The good Captain tries, but his solution is a heartbreaking one.

“Yesterday’s Enterprise” involves your standard rift in space-time, and as the episode’s title suggests, it also involves an older Enterprise, the Enterprise-C, that travels through said rift and alters the timeline in its wake as it encounters a militarized version of Picard's Enterprise-D. The new timeline pits the Federation in a war with the Klingons that Starfleet is losing, and it also brings back Denise Crosby's Tasha War, who died a "thankless death" in the first season of TNG. "Yesterday's Enterprise" gives Yar a chance to die like a hero, and it also gives fans one of the greatest TNG episodes as Picard and Guinan debate the moral grey areas that come with sending the Enterprise-C's crew to their deaths in order to save countless lives in a future that the present needs to exist.

The life of Jean-Luc Picard is the focus of this emotionally stirring "What if..." time travel episode, where the Captain and Q have a little tete-a-tete in the afterlife after Picard is killed by an energy surge that messed up his artificial heart.

Picard lost his original heart after getting stabbed in the chest during a brawl with aliens while he was a cadet. He has come to regret that choice in his life, which he reflects on in death, so Q decides to play a game of It's a Wonderful Life with Jean-Luc and send him back to his cadet days to relive his past and change his future. Picard does so, but his future becomes one that is more bleak than he anticipated — he finds himself to be an unremarkable junior science officer rather than the Captain of the Enterprise. It turns out that the brawl all those years ago incident helped make Picard who he is, so he asks Q to send him back again to get stabbed in the heart. "Tapestry" puts time travel and the idea of changing one's fate through a very unique, cautionary tale-like lens, resulting in one of the best hours TNG ever did.

Picard worries about destroying all of humanity on accident in "All Good Things..." (Credit: CBS)

“All Good Things” is the Q-filled series finale of The Next Generation. The two-parter has Q still judging humanity, and he’s time-hopping Picard through three time periods — the show’s present day, 25 years into the future, and Picard’s first mission as Captain of The Enterprise. In all these time periods, a mysterious anomaly is threatening all life, and Picard has to work across timeline to fix it. It is the best feature-length adventure this crew has ever had, and it is one of the most entertaining and well-written series finales in the history of television. 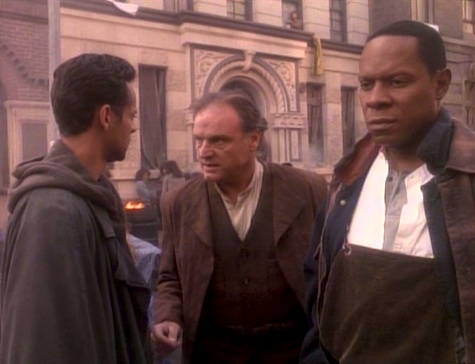 Deep Space Nine gave us a more bleak trip through time than fans were used to with this eerily prescient two-parter. Here, Sisko, Dr. Bashir and Dax go back in time to 2024, just days before the Bell Riots, a crucial point in human history where a violent confrontation occurs in San Francisco. Sisko and Bashir’s presence there inadvertently changes history, resulting in the Federation never existing and those stuck in 2024 charged with setting things right. (Which, of course, they do.)

“Little Green Men” is a fun throwback to black-and-white 1950s sci-fi, with Quark, Rom, and Nog finding themselves in 1947’s Roswell, New Mexico after a warp malfunction. The Americans think the Ferengi are Martians, and only-on-Trek hijinks ensue, especially with Odo in the mix. He made the time travel journey as he was investigating whether Quark was moving illegal contraband (spoiler: he was). The episode's fish-out-of-water banter hits more often than not, and Armin Shimerman steals the show as Quark gets deeper in hot water with the American military.

This Deep Space 9 episode written by Ron Moore for Star Trek's 30th anniversary celebration goes meta and has the DS9 crew sent back to another Star Trek episode: The Original Series’ “The Trouble With Tribbles.” Here, Sisko, Dr. Bashir, Chief O'Brien, Worf, Dax, and Odo find themselves over 100 years in the past, aboard Kirk’s U.S.S. Enterprise, where a secret Klingon agent has planted a bomb amongst bins full of Tribbles. The DS9 episode re-uses footage from “The Trouble With Tribbles,” Forrest Gump-style, adds our DS9 cast to it in a way that lets them share several delightful scenes with Kirk and the TOS crew.

“Year of Hell” finds a battered Janeway and her crew embattled with a Krenim time ship, whose captain (Kurtwood Smith) is trying to adjust the timeline through temporal incursions in order to bring back his late wife. His incursions impact Voyager when they have a run-in with another Kremin ship, which sets off a battle that has the Voyager on the run for almost a year and ultimately close to destruction. A desperate Janeway is forced to take extreme measures, like crashing Voyager into the time ship, in order to erase the last year and save this part of space. "Year of Hell" is the closest fans ever got to a Star Trek: Voyager movie, and it is truly one of the most ambitious two-parters in the franchise's considerable arsenal.

Voyager’s 100th episode starts out 15 years in the future, where we see the remains of U.S.S. Voyager on an ice planet. In this future, Chakotay and Harry Kim have spent years trying to find Voyager so they can send a message back through time and warn their crew (and their past selves) about the dangers of entering a slipstream that wrecked the ship.

LeVar Burton directed this riveting, action-packed episode; he also reprises his role as Geordi La Forge during a brief encounter with Kim.

Seven of Nine finds herself on a temporal investigation when the Starfleet timeship called Relativity recruits her to find out who placed a temporal bomb on Voyager, which will ultimately lead to the ship's destruction. Seven’s exploits take her back to moments on Voyager before she became part of the crew, and also has her playing ping pong, among other things. "Relativity" expertly plays with the rules of Trek time travel in ways that allow for a tense "ticking clock" feel to Seven's efforts to save Voyager in the past, in order to ensure that her crew have a future. Jeri Ryan carries the episode effortlessly, and her scenes trying to convince Captain Janeway of their tricky predicament pop as the two actors' get to flex their more comedic muscles.

“Endgame” is the series finale of Voyager and starts out 30 years in the future, where we find out that after over two decades, Voyager made it back to Earth. The elder Admiral Janeway, however, wants to change the past — not everyone made it back to Earth alive; Seven of Nine died on their voyage back along with over 20 other crew members, and Tuvok’s health has deteriorated. Admiral Janeway ultimately makes her way back in time and (eventually) works with the Voyager crew to enter Borg space, take on the Borg Queen, and use the Borg’s network to get back home.

While Enterprise focused on a temporal war, one of the show’s best time travel episodes involves Archer’s Enterprise traveling back over a century and then rendezvousing with Archer’s present-day Enterprise. When the two ships connect, many on board the Enterprise get to meet their descendants before the timeline is sorted out.

What to watch before 'Picard' S2 premieres