Who wants another look at Order 66? It's not enough that Star Wars: Revenge of the Sith showed us Jedi being betrayed and shot down all over the galaxy as part of the now-infamous plotting of Sheev Palpatine (Ian McDiarmid). The final episodes of Star Wars: The Clone Wars showed us a more intimate side of the tragedy, and before that, the game Star Wars Jedi: Fallen Order put us right in the middle of it. Please don't make us go through it again.

Yeah, Star Wars: The Bad Batch is here, and it doesn't care about your feelings. It's set right at the end of the Clone Wars, right at the transition point of Republic to Empire. Chances were good that we were gonna get 66'd again, but how bad could it be? A surprise appearance made it bad… but also good. Who the kriff are we talking about?

***WARNING: From this point forward there are spoilers for the premiere of Star Wars: The Bad Batch. If you haven't seen it yet, then make like Rey and run into the woods. Get outta here Dewey!***

On the planet Kaller, the Batch (official name Clone Force 99) arrives to help Jedi Master Depa Billaba (Archie Panjabi). Her Clone commander loves her leadership, and is quick to tell the Batch that General Billaba is the only one there who they take orders from.

That commander then gets a comm message and walks off. We hear a hologram boot up, and naturally it's followed by "execute Order 66." That Clone commander who was sticking up for his General not two minutes ago? He can't start shooting at her fast enough. What makes this sequence interesting isn't so much Depa Billaba, even though a few Legends stories tell fascinating tales about her. It's her padawan, who is present for all of this and also befriends the Bad Batch.

Her young padawan is Caleb Dume. However, he's better known to fans by another name: Kanan Jarrus, aka the Jedi hero of Star Wars Rebels.

Kaller is where young Mr. Dume's life fell to ruin. Before it does, he fanboys over the Batch, and they like him right back. However, when the other Clones start shooting, Caleb sees his master die. She screams for him to run, which he does, hiding from Hunter and Crosshair. Hunter wants to protect Caleb and figure out what's going on; Crosshair wants to fill him with holes.

After a chase, Hunter lets Caleb flee. He lies about it, telling Crosshair (and everyone else) that he's dead. Crosshair doubts this, and pretty quickly he's outright saying it's a lie. Caleb Dume is alive, and thanks to Hunter, he'll grow up and become a pivotal part of another Star Wars animated series.

The animation of young Caleb is extraordinary — we seriously feel the pain of what he's going through every step of the way. Also helping with that pain? He is played here, as he was played in Rebels, by Freddie Prinze Jr. The connection of canonical dots has never hurt so good.

Though these events are new to animation, they aren't new to Star Wars canon. We've already seen a version on them, and it happened in the first two issues of the canon comic Kanan: The Last Padawan. Written by Greg Weisman with art by Pepe Larraz, the comic doesn't involve Clone Force 99, but it does feature Depa Billaba (with a green lightsaber, not blue) getting shot down and screaming for Caleb to run, but he is then chased by two former Clone friends, Grey and Styles. 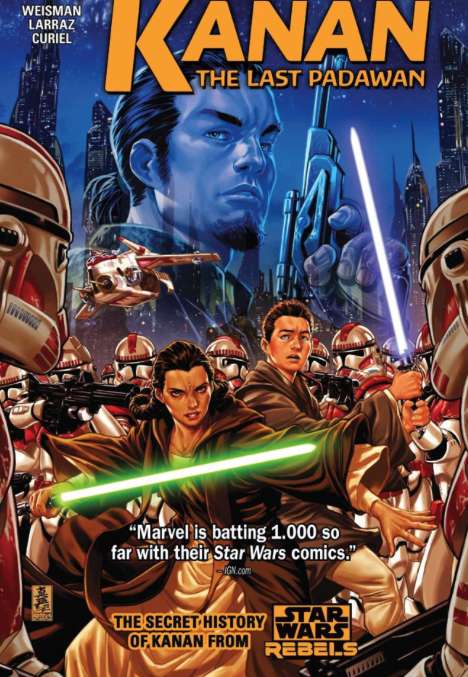 The planet Kaller remains consistent (in name, at least) and the general vibe is the same. In the comic, it's not long after these events that Caleb is changing his name and starting an entirely new life in hiding.

This is not the first time an animated series has somewhat contradicted existing canon. One big example is The Siege of Mandalore arc in Season 7 of Star Wars: The Clone Wars, which plays out differently from what we'd read in the beginning of the book Star Wars: Ahsoka by E.K. Johnston. Things like this are going to happen when everything is canon, especially in a galaxy this large.

Speaking to SYFY WIRE, Bad Batch supervising director and producer Brad Rau told us, "I mean, as fans ourselves, we were just excited to tell that story that had never been seen on screen. We wanted to honor the idea from the comic, but also some things are a little bit different, so we work really, really carefully with [series creator] Dave Filoni to craft how this would unfold… to see all of this going down became a really interesting thing to play with."

He continued, "And I mean, having worked on Rebels, I loved Kanan so much. It was really great to bring Freddie Prinze back to voice the young Caleb Dume. So awesome."

So awesome indeed! It may have only been in the beginning of this whopper of a premiere, but having the Prinze-voiced Dume in the mix was the perfect way to make things even more personal for fans. They could have invented a new padawan or used one that we'd only seen a couple of times, but that wouldn't have had the weight of the future Kanan Jarrus.

Kanan Jarrus, who now, canonically, owes his life to Hunter of the Bad Batch.

Season 1 of 'Star Wars: The Bad Batch' ends with a dark journey under the sea

Charlize Theron says she binged all of the MCU

Brendan Fraser is game for another 'Mummy' movie

The best sci-fi and horror TV episodes of 2022

The best sci-fi and horror TV episodes of 2022