Frank Castle is tired of cops idolizing The Punisher, and in this week's issue of his ongoing Marvel Comics series, he decided to let them know that directly.

This week Marvel released The Punisher #13 by writer Matthew Rosenberg and artist Szymon Kudranski. The issue is a continuation of Frank Castle's personal quest to take down Hydra once and for all in the wake of the Secret Empire event, and sees him following Baron Zemo's trail to New York City. While Zemo's in hiding, cutting deals with The Kingpin, Frank is walking the streets doing what Frank does, which includes killing a mugger and tangling with Hydra agent Ms. Fischer.

Things get complicated when two police officers pull their squad car over to question Frank about the muggings, and the officers draw guns on him when they notice he's still got the mugger in question's blood on his hand. Then they realize they've just detained The Punisher, and they're ecstatic. They're big fans. They've even got a little fan club going, but Frank Castle is having none of that. 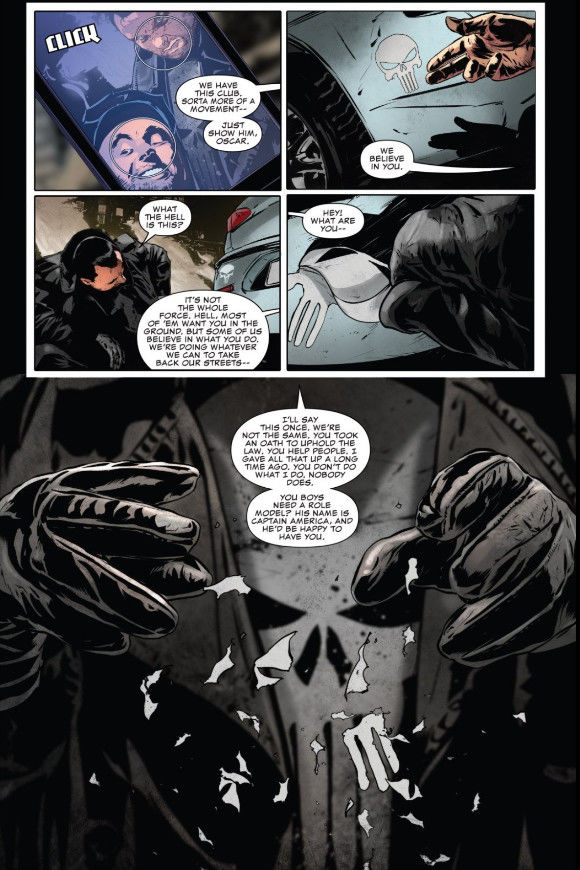 Still, the cops arent ready to give up just because Frank shredded their sticker. They try to argue. They point out that he started something with his one-man war on crime, and that he shouldn't then be surprised if people want to emulate that. This is The Punisher we're talking about, so of course he has a simple answer for that too.

Rosenberg's script for issue #13 is obviously directly addressing various real-world instances of law enforcement adopting The Punisher's famous skull emblem as part of their uniform or vehicle decoration on the job. The use of the emblem, cool-looking though it may, in an on-duty way tends to make people — including Punisher co-creator Gerry Conway — uncomfortable, because as Frank points out in the comic above, he's not here to protect and serve. He's just here to straight-up murder people.

Frank's point in telling off these officers is not that they shouldn't seek justice, but that they should do it in the right way, and not follow him down the path of ultimate darkness that he feels he can never come back from. To see that rendered in such a direct way on the comics page is striking, and it reflects the way changing times have also changed the way writers approach one of Marvel Comics' most enduring antiheroes.

It's a fan thing
Join SYFY Insider to get access to exclusive videos and interviews, breaking news, sweepstakes, and more!
Sign Up for Free
All Posts About
Comics
News
marvel comics
the punisher
Related Stories

Frank Castle and The Punisher's secret soft side