The redemption of Doug Ramsey, the worst New Mutant

If you were an original reader of The New Mutants and you aren't clinically insane, then you surely agree with the assessment made in the second half of the title to this week's column. Put a hold on those Hot Takes: Doug Ramsey was the LAMEST of Professor Xavier's mutant heroes-in-training. Search your feelings, you know it to be true.

So how has he become one of the prime figures in Jonathan Hickman's ongoing X-Menaissance? Despite limited page time, Ramsey occupies an important place in the new mutant sovereignty, thanks to his unique abilities that allow him to decipher any language. As a result, he is able to communicate directly with the mutant island of Krakoa, making him indispensable and earning him a seat on the Quiet Council.

The last time we saw him in X-Men #7, he was spotted sitting with his old pal Warlock when Cyclops showed up. Warlock disappeared in an instant, so Cyke isn't even sure he actually saw him, and Ramsey did nothing to dissuade him of that. Strange and likely sinister things are afoot, for certain. What Mr. Ramsey's role was in those affairs has sparked lots of speculation on comics message boards, with some thinking Hickman is playing a long game that will set up the Technarchy as a major adversary to the mutant nation. Makes sense, given that there have been subtle hints almost since the launch of Hickman's ambitious reboot.

There was the moment in Powers of X #2 when the Krakoa of an alternate future mentioned that his form once was controlled by a mutant who could communicate with anything. In Powers of X #4, Doug's technarch-bonded arm glances a Krakoa flower, beginning the gradual infection. Given the Technarch's history, did Ramsey just set the table for the alien race’s invasion of Krakoa? Is he aware?

[FYI, while the comics industry tries to get itself situated during the pandemic, there's a sale on all the Dawn of X comics at Marvel’s Digital Shop. So if you need to catch up, that's a cost-effective way to do it.]

For those who aren't as familiar with him, Doug Ramsey was introduced in The New Mutants #13 by Chris Claremont and Sal Buscema. He was computer pals with Kitty Pryde and later Warlock. But from the start, he was as forgettable as those original NM black & yellow costumes, and twice as annoying. If they had made a New Mutants movie in the '80s, he would have been played by William Zabka. His code-name "Cypher" did little to rally support around him, because back then, having the ability to decipher any language basically meant he stood around a lot and dished out information. It wasn't just the fans who didn't care for him; not even the book's editor, Louise Simonson, thought much of him, and Weezie is about the nicest person in comics. 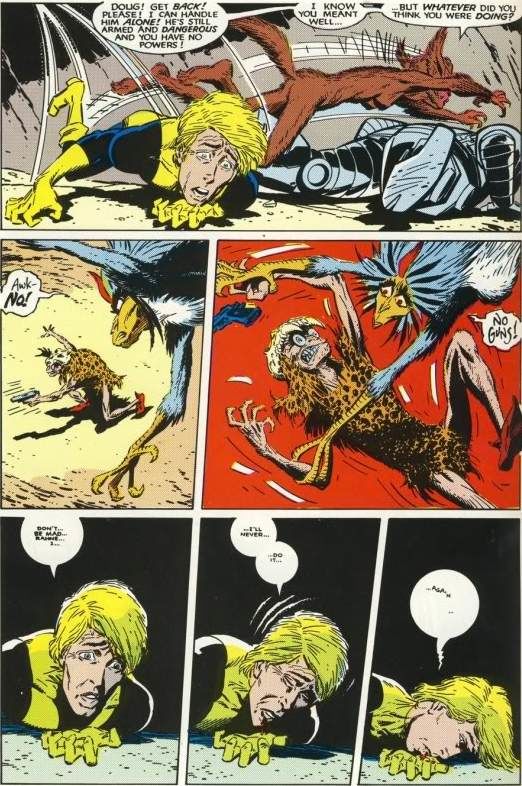 In a cruel bit of irony, it would take his death in The New Mutants #60, taking a bullet meant for his teammate Rahne Sinclair, to get fans to actually give a crap about him. He would stay in the Marvel morgue for an unusually long time even by comics standards -- more than 20 years, with an occasional reference or a head-fake like the "Phalanx Covenant" storyline notwithstanding. He would truly come back during the 2009 "Necrosha" crossover.

Ramsey not only returned, but his resurrection made him interesting. As writers got more creative and savvy about how to apply his powers during the Internet era, he became a true Cypher. Someone who could interpret all languages… even body language. He became something of a mutant version of Taskmaster, only instead of photographic reflexes, Ramsey could instantly decode an opponent's body language and counteract their moves. Brilliant, actually. Over the next few years, he would do things like actually defeat the Master Mold and save Utopia and have sex with a sentient robot. Yeah, that happened.

To me, though, Doug Ramsey wouldn't become a fully formed character until years later, in 2018's Hunt for Wolverine arc. Writer Charles Soule and artist Matteo Buffagni portrayed him as an information addict, a tech junkie. Their version of Cypher was hopelessly addicted to the Internet, trying to decode the entire World Wide Web. It was a fascinating and tragic lens through which to view his power set... and it was the first time I had ever truly cared about Doug Ramsey.

All it took was time for different creators to bring a fresh perspective to a character whose potential was buried deeper than most. It's happened before in comics. It took John Romita Sr. replacing Steve Ditko on The Amazing Spider-Man to help Stan Lee unlock the potential of Gwen Stacy. Later, Gerry Conway would figure out that Mary Jane Watson was really the girl of Peter Parker's dreams.

John Byrne did the same with She-Hulk, as did Marv Wolfman and George Perez with Donna Troy. It took a couple of decades, but Jim Shooter (and others like Roger Stern) finally managed to unlock the Wasp's potential as a truly great Avenger. Now, Hickman's taking the ball from Soule and doing the same with Doug Ramsey.

Even though he's back to his clean-shaven, prep-school look, it's clear there is much more to Ramsey than his perfect blonde hair. We know Hickman loves his reclamation projects. Look at what he's doing with Black Tom and, of course, Moira MacTaggart. I'm really looking forward to seeing where his grand plans go, and I especially can't wait to see what role Doug and his information-culling skills play in the X-tapestry.

And I really can't believe I just wrote that about a character that I loathed when he first arrived in Mutant-landia. But here we are.

What's your favorite Doug Ramsey story? Oh, who am I kidding? How about you sharing your favorite Dawn of X theories? Find me on Twitter/Facebook/Instagram and let me know!