Ub Iwerks is a name that many, besides hardcore Disney faithful, might not immediately recognize, but as one of Walt Disney's most important artists and technical visionaries, he holds a special place in Hollywood history for his countless contributions to the motion picture, animation, and theme park industries.

Iwerks, a Renaissance man if there ever was one, co-created Mickey Mouse and Oswald The Rabbit with Uncle Walt, and he drew and animated the icon for his first sound cartoon in 1928, Steamboat Willie.

Besides crafting all of Mickey's early toon favorites and numerous Silly Symphonies like The Skeleton Dance, Iwerks enjoyed an extraordinary life of creative achievement, now told in a deluxe 224-page hardback written by his award-winning son and former Disney Executive, Don Iwerks. 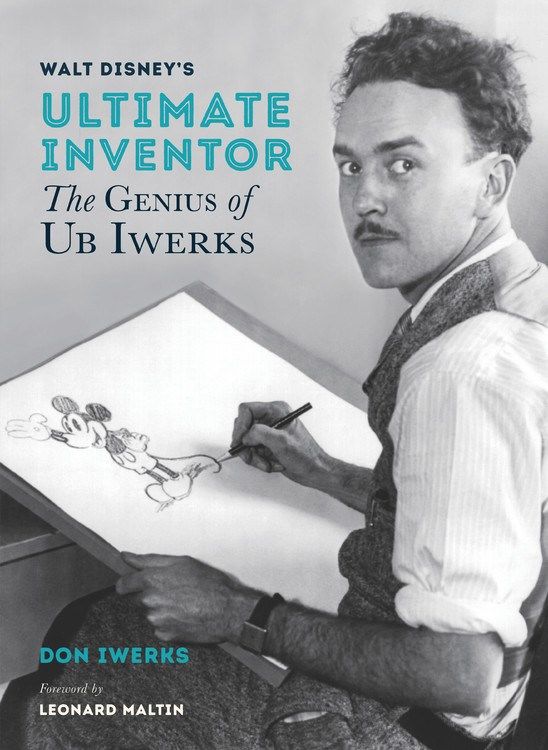 Walt Disney's Ultimate Inventor: The Genius of Ub Iwerks, from Disney Editions, is an illuminating chronicle of Iwerks' 50-year career and close relationship with Walt Disney. The friendship began when they met as young animators in Kansas City, then developed into a business partnership in the early years at Walt Disney Studios. They split up in 1930 for ten years, then reunited for good in 1940.

Besides showcasing dozens of never-seen photographs, rare concept art sketches, personal memories, and film posters, Iwerks pays special attention to his dad's mechanical marvels in the field of special effects, multi-planed cameras, animatronics, and optical printers. The Academy Award-winning visionary's remarkable resume is crammed with wizardry created for many of Disneyland's E-ticket attractions, including the Haunted Mansion, Pirates of the Caribbean, Star Tours, and It's a Small World, and Disney classics such as Mary Poppins and even Alfred Hitchcock's The Birds.

From what angle did you approach this project and what was most important for you to focus on?

What's never really been written about my dad is the time after he came back to the studio in 1940, all of his inventions. And I had the distinct honor and privilege to work with him for about 18 years on a lot of the things he invented that have never been written about. I thought the world really needs to know and he deserves to get recognition for these various inventions and processes he came up with.

So back in 2007, with the encouragement of Diane Disney Miller, I started writing a book and it's taken me off and on since then to get the book out. Disney Editions has been a tremendous help in taking my manuscript and dealing with the challenge of describing his inventions in a manner to people who are not technically inclined.

In describing your father's legacy, what were some of the things you targeted besides his animation work with Mickey and the cartoon shorts?

One would be the Xerox process as applied to animation. Roy Disney, who was Walt's brother and the one who took care of all the finances, told my dad one day that he was going to recommend to Walt that the studio discontinue making animated films because they cost too much and the money is tied up for too long. My dad got to thinking about it. He remembered Walt had been quoted that he hoped they never lose sight of the fact that all of this was started by a mouse. So he experimented with a Xerox process and showed it to Walt and he was in agreement and told him to work it into the production system. The bottom line is that my dad saved animation at the studio.

Another would be his invention of the Circarama Circle-Vision process, the 360-degree movie that ran at Disneyland and the other parks for a number of years. That all came out of a hallway conversation back in the '50s when Cinemascope and other widescreen films were being made by studios. Walt mentioned to my dad, "Hey Ub, do you think there's a way we could do a full circle? We could find a sponsor and have a theater at Disneyland." So my dad went back to him in a few days and said, "yep, we can do it, and here's how." Walt gave him the green light to go and that became the world's first Circarama theater, comprised of 11 cameras and 11 projectors.

Last year was the 50th anniversary of Disneyland's Haunted Mansion. Can you explain your father's contributions to the attraction like the Madame Leota crystal ball?

My dad had experimented with color slides, along with an Imagineer named Yale Gracey, who was in charge of the special effects there at WED. My dad's participation in that had to do with turning the camera. They were photographing this lady in 16mm and it's basically a vertical composition. But he thought you could get a sharper image if you rotated the camera 90 degrees so the image was running the opposite direction. You got a larger image and less magnification onto the statue, which would result in a much sharper image.

What was the magic between your father and Walt Disney and what made it so unique?

I think it was a common respect and admiration for each other's abilities. Walt was a master storyteller and my dad was a master at animation and mechanical devices that would help the animation process. So during the time when he was on his own in the '30s, he came up with the first multi-plane camera and Walt thought so highly of it that he had three of them built for the studio before my dad came back. It was that mutual admiration and the ability to help one another. It was the same with the sodium traveling matte process and Walt saw that as a real breakthrough, of combining animation and live-action together.

You worked on 20,000 Leagues Under The Sea in the early '50s and were in charge of the underwater cameras while filming in the Bahamas. What else do you recall about the shoot?

Yes, I was there for three months while we did all the underwater work to babysit the cameras. I do remember the scene of Nemo fighting the big squid. That was done on Stage Three at the studio in the tank. I went over to watch them film it and the number of special effects people had pulling wires and making those tentacles move all over was an enormous achievement.

Originally that was done against a kind of a sunset sky and Walt was not pleased with it at all. They gave it to special effects man Bob Mattey, and they gave him the job of redoing it on the sound stage with rain and darkness and lightning and it made it a far more dramatic sequence. Walt was a great man to work with and everybody in the studio had a tremendous respect for his knowledge and abilities and everyone loved to please him.

What do you think your dad would say about the Hollywood animation industry today and where it's headed into the 21st century?

Well, he was always interested in technical progress. Not only was he a mechanical genius, but when it came to electronics, he was into that too. He'd read at home and study and learn how to do other things besides mechanical devices. On one hand, I'm sure he'd be deeply involved in the digital transformation that's taken place in animation. But on the other hand, being an artist, the old cartoons were hand-drawn, and I think he would equally feel bad that that art is on the decline in favor of digital animation.

Did your dad have any passion projects left unrealized before he passed away in 1971?

The one he was unable to complete was The Hall of Presidents, which was his very last project for Walt Disney World that opened in 1971. He was given the task of projecting an image 200 feet wide for a pre-show sequence. And he used the technique he used in Circle-Vision, this time with five projectors that would make a long mosaic image made of paintings done by a cadre of artists depicting great moments in the history of our country. He passed away before he could get that done, but he entrusted a number of people with how that would all go together.

How did your dad view the expansion of his and Walt's Mickey Mouse character from humble beginnings to the beloved global ambassador he is today?

He was often asked if he ever got upset that Walt always got all the credit for Mickey Mouse. My dad's answers to that, being a humble man and being pragmatic about it, was that it isn't the creation that counts, it's what you do with that creation. He would give full credit to Walt for making Mickey Mouse a worldwide icon.