So hold on tight to your money as your coinage and bills do their weekly wallet dive and transform into shelf candy on the way down. Because seriously — we have some mind-blowing toy goodies on the way. Join me, your resident if not favorite Toy Journalist, while we dive back into the toy box for another adventure down the rabbit hole that is new toys and collectibles announcements.

And first up this week, things are liable to get spooky...

We have to say, we're excited about this bloody Michael Myers figure! The Halloween 1978 Michael Myers Blood Variant Figure is a collectible action figure that comes straight from the folks at Trick or Treat Studios. According to FUN.com, the studio is "dedicated to making high-quality collectibles inspired by one the greatest horror movies of all time and they've taken extreme care to craft an action figure worthy of horror's most infamous villain."

The figure has 30 points of articulation and stands 12 inches tall to allow for a near-limitless amount of different movie-inspired poses. Trick or Treat Studios Halloween 1978 Michael Myers Blood Variant 12-inch Collectible Action Figure costs $139.99 and can be purchased from FUN.com.

Transformers lovers can build some great snap-together dioramas thanks to Jazwares! Now in the Zoteki line, the heroic Autobots and evil Decepticons face off like never before!

Per Jazwares, "Transformers Zōteki Series 1 is a collection of 4-inch collectible characters in battle-action poses with detailed bases, and can be combined to form a dynamic diorama display that is sure to be the centerpiece of any fan's collection." Inspired by the iconic "Generation One" 1980s packaging artwork, Transformers Zōteki Series 1 features fan-favorite characters Optimus Prime, Megatron, Bumblebee, Soundwave, Starscream, and Grimlock, all authentically detailed and posed for battle. Collectors can hunt down the seventh character — a mystery chase variant — to customize their display.

These toys will start popping up where toys are sold and retail for about $7.99 each.

In today's segment that I am conveniently calling "The Most Wholesome Thing I Have Ever Seen" we are checking out the newest creation from Hot Wheels: the Mars Rover Perseverance! It is part of Hot Wheels and NASA's official collaboration. The new die-cast, part of Hot Wheels' first space-themed mini-collection in over 20 years, is a detailed 1:64 scale replica model inspired by NASA's real Mars Perseverance Rover, which is expected to make its much-anticipated landing on Mars on Thursday, Feb. 18. You can find it where collectibles are sold — it is available now and retails for only $1.09!

Funko Fair is wrapping up, but not before some stellar Pop! goodies were revealed. Funko has added four new Pop! vinyl figures to its G.I. Joe lineup. I'm telling you, these are going to be the easiest to find G.I. Joe toys of the year.

Check out these awesome 3.75-inch pieces, buy them for $10.99 (shipping July 2021) wherever your favorite collectibles are sold, and make sure you snag them for yourself. The new wave includes The Baroness, Snake Eyes, Storm Shadow, and Scarlett. Make sure you check out the Funko Fair page so you don't miss a single new announcement! 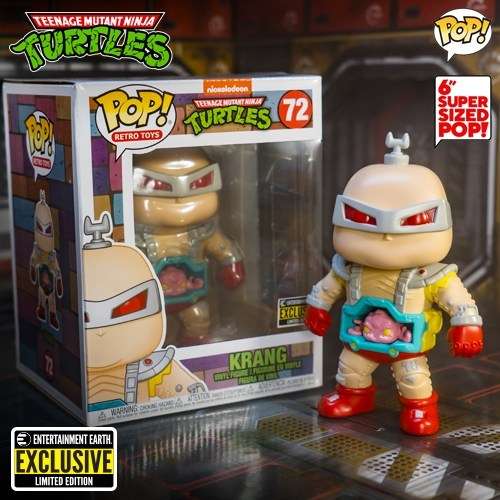 On the topic of Funko and Pop! vinyl figures, Entertainment Earth is showing off an amazing exclusive! It's a jumbo 6-inch Krang from Teenage Mutant Ninja Turtles and seriously, the colors, details, and paint on this thing are wonderful! The brainy trans-dimensional alien ally of supervillain Shredder is all decked out in his menacing and well-armored robot body, ready to take on the Turtles and anything they might throw at him.

This Entertainment Earth Exclusive comes in window-box packaging, ready for play or display in the sewers of New York City or wherever you might call home. You can preorder Krang today for $22.99 directly from Entertainment Earth. He will ship in March 2021.

Bandai is giving fans two new toys from the S.H.MonsterArts line and inspired by the upcoming Godzilla vs. Kong movie. Godzilla stands 6.3 inches tall and King Kong is 5.7 inches, however, both cost $67.99. (You can preorder by clicking their respective names, each sold separately.) Kong comes with three extra hands and a battle ax while Godzilla comes solely with an extra pair of clawed hands. Both ship in June 2021.

WILLY WONKA AND THE CHOCOLATE FACTOY

In a segment I'm calling "Pop Culture Statues," we're looking at... well... some pop culture statues! This week, there were four beautiful pieces announced by three different companies and there is no way anyone out there should miss a moment of this majesty.

First up, come with me and you'll be in a world of pure imagination because we are celebrating one of my favorite films of all time, Willy Wonka and the Chocolate Factory. This statue was created in order to celebrate the 50th anniversary of this classic film and its iconic lead actor, Gene Wilder. Willy Wonka is made of polystone and is hand-painted. It stands 9.8 inches tall and includes two Oompa Loompas. Iron Studios will hide some "Golden Tickets" inside the boxes of this piece, distributed worldwide, and will prepare a special surprise for the lucky ones who find these tickets. This statue costs $269.99, will ship in December 2021, and is available to preorder today from BigBadToyStore.

The Star Wars princess of rebel scum and sass is coming at us in this new 1/6-scale statue by Gentle Giant. Wearing her classic white gown and resting on a cell bench, Princess Leia Organa awaits rescue in a scene straight out of Star Wars: A New Hope. Approximately 10 inches tall, this sculpture features detailed sculpting and paint applications and is limited to only 1,000 pieces.

It comes packaged in a full-color box with a certificate of authenticity. Gentle Giant's Princess Leia Organa milestone statue costs $200, ships in 2021 (sorry to be vague), and is available for preorder today.

And the last entry of the day comes with two new delights from Beast Kingdom, which is giving Steven Spielberg movies some love with statues from Jurassic Park and E.T., both in the D-Stage line!