So hold on tight to your money as your coinage and bills do their weekly wallet escape. Because seriously — we have some mind-blowing toy goodies on the way. Join me, your resident if not favorite Toy Journalist, while we collect all of the things we love in toy form!

And while we love giving all toymakers a fair chance, we have to admit that post-Hasbro Fan Fest, we have to give the toy giant a bit of extra love to appreciate the explosion of collectible surprises it threw out into the world this week. Starting with… the Afterlife!

Choose the smallest, most collectible method of your destruction with the Ghostbusters Mini-Pufts Surprise figures from Hasbro. Detailed to look like characters from the 2021 Ghostbusters: Afterlife film, each series of 1.5-inch Mini-Puft figures is inspired by the original Stay-Puft Marshmallow Man but comes equipped with new mischievous personalities from the movie.

It has a really cool gimmick along with it, which is once you open the Stay Puft Marshmallow can, you dig into the goopy marshmallow-like compound to see which Mini-Puft figure is inside. While blind bags aren't for everyone, I love the secondary play element here with the compound. Basically, it means I get to collect the little plastic Stay-Puft toys while my kids live their best molding clay compound life. Everyone wins!

These cost about $5 per can and will be available in stores in Fall 2021.

The next great reveal to come out of Hasbro Fan Fest was a Star Wars announcement! Hasbro teamed up with Entertainment Earth to bring us another entry into the 3.75-inch Star Wars Vintage Collection — this time with an Electrostaff Purge Trooper!

Based on the characters from the game Star Wars Jedi: Fallen Order, this Trooper includes an electrostaff pole with plastic effects to engage in combat with the Jedi or any who dare oppose the will of the Emperor. This awesome figure costs $14.99 and is available for preorder today only from Entertainment Earth.

The next amazing Hasbro reveal on our list sold out instantly, but that won't stop us from drooling over it. I'll tell you a secret — I managed to preorder one (one was the limit!) and so I'm experiencing a severe case of the Toy Collector Squee over this way. It's the Mighty Morphin' Power Rangers Tyrannosaurus Sentry figure, inspired by the MMPR comic where the Tyrannosaurus Sentry serves as the elite guard of Lord Drakkon.

I love how Hasbro is not only making classic Power Rangers figures and new figures based on the current show seasons, but also giving some love to the Boom! comic characters. What a time to be alive!

The new G.I. Joe Snake Eyes movie is on the way and Hasbro just dropped an entire wave of movie figure characters in its 6-inch G.I. Joe Classified line.

Each character comes with multiple points of articulation and several weapons. These character depictions are based on the movie actors, which means that until we see how the characters are played we may not automatically connect with the way some of these toys appear. (Looking at you, Baroness). The wave includes Snake Eyes, Storm Shadow, Scarlett, Baroness, and Akiko, all of whom you can preorder at Amazon by clicking their names for about $20 a piece.

And now for the big Daddy of Hasbro announcements — this is it.

People, we have a self-transforming robotic Transformers Optimus Prime on the way by Robosen Robotics. The new robot is the first-ever consumer robot that features a comprehensive set of functions, including automatic convertible movement into a new form factor, bipedal walking ability in robot form, race function in vehicle form, programmable/code development, and robot control/commands by either voice or via mobile app.

This will be an unparalleled interactive experience for the millions of fans of the franchise, with additional new products and collectibles being announced in the months to come. It was available for preorder at Hasbro Pulse for a whopping $700, but at this point is very sold out. For that price, this self-propelled Prime better cook my dinner, make my bed, and fix me a drink while I cry over my dried-up bank account.

We're nearing the end, my toy collecting friends, but we can't just bounce out of a week in toy news without showing off what other toymakers are doing. Because toys are excitement, ooh, toys are adventure. Toys are glamour and glitter, fashion and fame.

Wait — that's not toys. It's Jem, and she's back and more truly outrageous than ever before with Super7's newest ReAction figures.

The power of Synergy has transformed Jerrica Benton into the totally fabulous pop star Jem. This 3.75-inch articulated ReAction figure of the lead singer of the Holograms comes with her microphone and is on a holographic card back straight out of your '80s dreams. The wave comes with either Jem or her Misfit rival Pizzazz, both of whom can be purchased for $18 each at Super7 today. 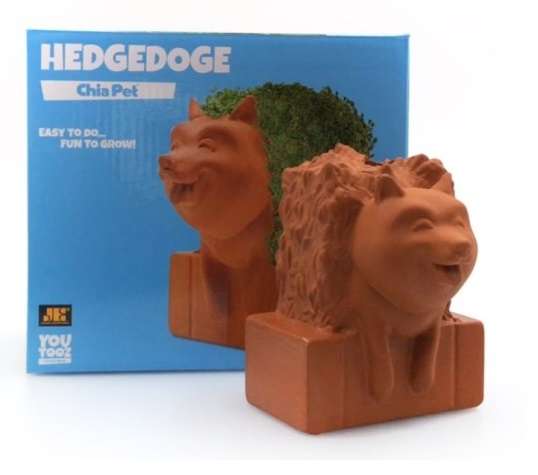 Earn your green thumb with the new Youtooz and Joseph Enterprise's Chia Pets collaboration. Tend to your own Motivational Lizard and Hedgedoge limited edition Youtooz Chia Pets with real live Chia Sprouts and watch it grow. The packaging features instructions from Chia Pet on how to take care of and grow your memes.

Each Youtooz Chia Pet retails for $22.99 and they actually grow for-reals plants!

Speaking of Youtooz, check out the vinyl toy maker's second release this week! Popeye is a pugnacious, wisecracking sailor with superhuman strength, which comes to him after eating spinach — which he conveniently finds when in need.

Released in 1919, this American classic has remained a pop-culture staple for over a century. This intricately designed collectible stands 5 inches tall, using the classic comic book Popeye vibrant color scheme. He wears light brown sailor shoes, blue jeans, as well as his classic black-and-red shirt. No detail is spared, including his anchor tattoos printed on each muscular forearm.

You can preorder your own Popeye Youtooz vinyl figure today for $29.99. He will ship June 2021.