So join me, your resident if not favorite Toy Journalist, while we dive back into the toy box for another adventure down the rabbit hole that is new toys and collectibles announcements. Because this week we are experiencing a delicious blend of the old, the new, the retro, and the nostalgic, starting off with that adorable little bundle of flames that has been an internet favorite since 2019.

Do you get a bad feeling about this little dumpster fire? Bad Vibes have never been cuter with the newest addition to the Dumpster Fire Vinyl Figure collection. This one is an Entertainment Earth Exclusive.

Measuring about 3.5 inches wide, 3.5 inches long, and 2.75 inches tall, the figure is based on the popular Lil Dumpster Fire and features a dark, rainbow-and-black design with a bright pink glitter flame. There's nothing like it, and the only place you can get one is right here for $30 at Entertainment Earth. The original blue vinyl figure is still available, the orange and green pumpkin edition is in stock, the plush toy was just announced, and there are pins and hats galore.

Mezco Toyz is introducing Superman (1941): Deluxe Boxed Set — inspired by the 1940s animated short "The Mechanical Monsters" — to its 5 Point Collection. These are the 3.75-inch classic Kenner-style figures with very limited articulation that are just so deliciously pretty. The set includes Superman, Clark Kent, Lois Lane, Mechanical Monster Number 5, a whole slew of accessories, and a backdrop.

You can order your own set for $90 today directly from Mezco Toyz.

Do you remember The Toxic Crusader? Well, now it's Super7's Toxie, like you've never seen him before!

With translucent green glow-in-the-dark injection molded plastic and UV reactive color-changing paint, this Ultimates figure has three different looks, as if Toxie is reacting to his environment — polluted or clean, light or dark. Via Super7, "His standard appearance features bright neon paint, and in sunlight, Toxie will almost instantly change to an angry red! In the dark, once charged by the sun or your favorite light bulbs he will glow a menacing green."

The Radioactive Red Rage Toxie Ultimates figure comes with interchangeable heads and accessories, including a belt with grenades, a mop with a clip-on flag, and a translucent orange Toxic Crusaders-branded shield. Your Ultimates figure comes packaged in a deluxe slip-case style box. Preorder him today for $54.99 — he's shipping in March 2022.

Statue time! And today, we're checking out the newest 1/10-scale X-Men piece from Iron Studios. The man known as Forge advances into battle over the rubble of the battlefield. With an unmistakable expression of fury, and carrying a true arsenal next to his cyborg body, he relentlessly attacks his enemies.

The Mutant Master of Technology is also, according to both Iron Studios and creators Chris Claremont and John Romita Jr., gifted with Intuitive Engineering. Wowzers! You can preorder your own Forge statue directly from Iron Studios today for $169.99. 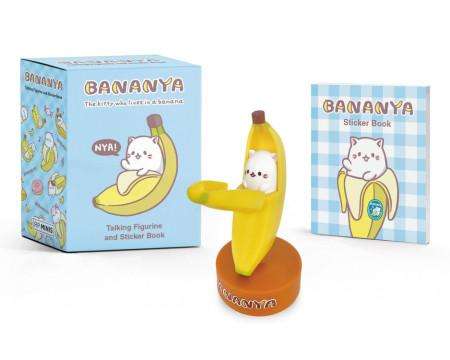 The beloved Bananya, an adorable kitty who lives in a banana, is coming back into the spotlight with the launch of a new book! The Secret Life of Bananyas is the official adventure guidebook for this secret world of kitties living in bananas and it's launching nationwide today!

This book is the perfect addition to any Bananya collection with previous releases including a figure and sticker mini kit, Tora Bananya plush — and if you're a lifelong Oldtaku like me, you can also watch both seasons on Crunchyroll!

We're nearing the end, my toy-loving friends, and today we are going to check out two new delights in the world of Fandom Board Gaming!

First up is Ravensburger's Marvel Villainous: Mischief & Malice, the first expandable game in the Marvel Villainous franchise, which adds three new characters to the lineup: Loki, Madame Masque, and M.O.D.O.K. The title is suitable for two to three players ages 12+, will have an MSRP of $24.99, and will be available in August 2021 at major retailers and friendly local game stores nationwide.

SpongeBob SquarePants is no stranger to memes (remember those amazing vinyl toys from a few years back via Nickelodeon? Those were great!) And now, the world's most famous game (no, not UNO) is getting the SpongeBob meme treatment!

The internet's favorite memes have joined forces with America's favorite board game courtesy of The Op. The brand is launching Monopoly: SpongeBob SquarePants Meme Edition this April. It costs $39.99 and is available for purchase today!