WWE Wrestlers are ghostbustin', plus more May the 4th Star Wars merch

So keep your gloves and masks within reach (please), get ready to shop (perhaps a blend of online and small retail stores coming up soon?), and get ready to jump back into that toy box (but stay six feet apart, please) with your resident, if not favorite, Toy Journalist!

May the 4th and Revenge of the 5th have come and gone, and believe me, we had some incredible coverage here on SYFY WIRE of all the new and amazing Star Wars swag that’s coming our way. More merchandise than you can even skewer onto a lightsaber was shown off and man, between the vintage-style toys, Star Wars-inspired Barbie dolls, the Amazon exclusives that sold out in parsecs, and Baby Yoda Chia Pets and Monopoly editions, there’s just no way that more could have been announced.

Oh, except that it was, and I’m going to give you the goods right now.

Coming soon from LEGO, we have the newest version of the AT-AT.

Now, this is a set that is recreated often, but every time a new one comes out, it is always amazing and constantly delicious. This set is coming from LEGO this summer and it comes with six minifigures: Two AT-AT drivers with new helmets, Luke Skywalker with a new paint job from his other minifigure sets, General Veers, and two Snowtroopers.

We don’t have any preorder links or concrete pricing yet, but word around the playground is that this set will cost approximately $150. 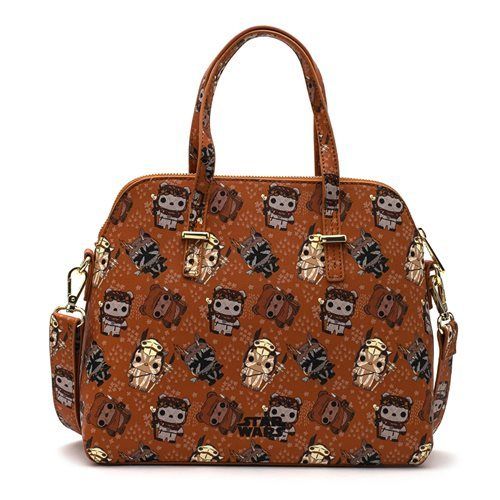 Next up in newly announced Star Wars items that you don’t want to miss is an adorable (and extremely fashionable!) Ewok purse from Loungefly. And seriously, it’s one of the most attractive nerdy purses I’ve ever seen in my life. It looks like a nod to high-end designers like Louis Vuitton but manages not to look satirical.

I’ve never been too stoked for Ewoks, but this is the product to do me in. This unique and beautiful Star Wars Ewok Pop! Crossbody Purse features a zipper closure, an adjustable strap, and a Star Wars lining. Covered with various images of those teddy bear-like Ewoks, it’s made of faux leather with printed details and measures about 11.5 inches wide x 9 inches tall x 5 inches deep.

This will be a big hit when you journey to the Forest Moon of Endor. The Loungefly Ewoks purse costs $65 and is shipping out to nerds like me in June 2020.

All right, who is ready for some kicka** regular toys? I know I am!

For our next item, we are showing off a hilarious (at least I find them hilarious) WWE and Ghostbusters crossover from Mattel. These particular action figures were Walmart exclusives last year and are making their return for a new issuing from Entertainment Earth. In the, like, five minutes that these babies have been online, I’ve seen some griping from fans. But again, I think these are just as amusing at the WWE x He-Man crossover from last year. So, it all comes down to taste.

Featuring WWE’s biggest personalities and champions, these bold and colorful figures are approximately 6 inches and come ready to blast their proton packs right of the box! Each figure has deluxe articulation for multiple ways to pose and play, TrueFX enhanced facial detailing for life-like authenticity, WWE ring gear, and Ghostbuster-specific accessory or decoration.

Whether it's someone's face or a ghost, bustin' definitely makes these wrestlers feel good. This set costs $103.99, ships this month, and is available for preorder from Entertainment Earth.

Next up in newly announced toys, we have a Spider-Man Marvel Legends Retro Collection Marvel’s Kingpin.

A tribute to the history of Marvel Super Heroes, the Marvel Retro 6-inch Collection features core Marvel characters with retro packaging and design. Each figure includes multiple points of articulation, classic-inspired details, and character-specific accessories. Collectors and kids alike can expand their Marvel collection with 6-inch scale figures from the Marvel Retro Collection! He costs about $30 and can be ordered right here. Kingpin will ship in August 2020.

Continuing in the vein of comic book-inspired toys and collectibles, Iron Studios (a company whose work I think it just beautiful) is showing off a Batman and Robin diorama statue that, for whatever reason, I find just a little bit cheeky.

I don’t know, there’s something about Robin running from Batman in their super classic costumes that’s just working out for me.

Swinging into action, the duo (standing about 10 inches tall) features incredible details as if they hopped right out of the comics — from the fluid movement of Batman’s cape to Robin’s trusty Batrope and their building rooftop base, this hand-painted statue is a must-have for any DC collection.

Hey — you guys like robots, right? I know I do, and they dominate much of my toy collection. So when a beautiful new Transformers Masterpiece figure from Takara Tomy is announced, there’s no way we can’t talk about it.

BE EXCELLENT TO YOUR TOYS

We’ve hit the end, my toy collecting friends, and the last item on our list is a... phone booth. A collectible phone booth. But not just any phone booth! It’s the time-traveling phone booth from Bill and Ted's Excellent Adventure, the coolest phone booth in pop culture history (unless we want to make an argument for the TARDIS, which I’m sure many pop culture junkies out there would like to do, so it might be heads or tails on this one, fellas).

Now, the amazing new Bill and Ted action figures were announced pretty early last year, and those go for $29.99 each. However, the phone booth costs $40. It’s a bit steep, but you only need one as opposed to buying Bill and Ted (because why wouldn’t you keep them as a pair, right?).

You can preorder the phone booth as well as check out the rest of the Bill and Ted line directly from Incendium Online.