The end is most certainly nigh for Netflix and Guillermo del Toro's Trollhunters franchise with the first trailer for Rise of the Titans. Playing like a compilation of del Toro's greatest hits, the footage teases a war between mankind and magic, giant monster battles, and wise-cracking protagonists. It channels everything from Pacific Rim, to Hellboy, to Shadow of the Collusus (and while the game isn't among del Toro's own body of work, the director once described it as a "masterpiece").

Combining the worlds and character of all three Tales of Arcadia series — Trollhunters, 3Below, and Wizards — Rise of the Titans centers around an epic struggle with the Arcade Order "for control over the magic that binds them all," reads the synopsis.

"Team Trollhunters committed, about a decade ago, to try and push the boundaries of 3D CGI animation made for TV. We outlined a vast trilogy of interconnecting mythology and characters that we always hoped could culminate with a massive 'all-stars' reunion,” del Toro said in a statement last summer. "DreamWorks Animation and Netflix both shared the very ambitious notion of doing the three series, interwoven and then finishing off with a bigger, epic-sized feature film to top it all off."

Check out the film's official key art below: 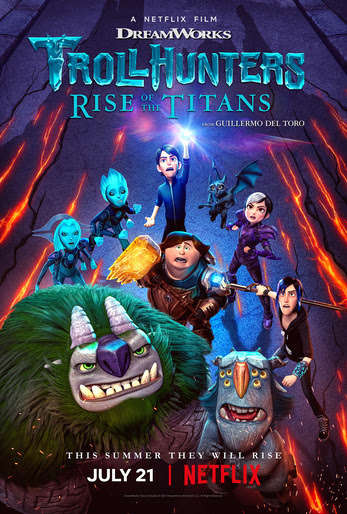 Trollhunters: Rise of the Titans premieres on Netflix Wednesday, June 21.

All Posts About
Movies
News
Guillermo del Toro
Netflix
Trailers
Trollhunters: Rise of the Titans
You May Also Like
Recommended by Zergnet
Latest on SYFY WIRE