Voodoo may not be one of comics' best-known characters, but she is one of the coolest underrated antiheroes ever to grace the page. A telepathic alien of mixed ancestry with murky motivations and a lack of tolerance for deception, Priscilla Kitaen has been a breakout character waiting to happen for going on three decades now.

One of the founding members of WildC.A.T.S, Priscilla has been quite literally to the ends of the earth, but she remains perhaps the only truly grounded member of the team. While most of her appearances focus around her interactions with villains and teammates, Voodoo as a character is much more interesting than most of whom she's been paired up with by a pretty wide margin.

What Even Are The WildC.A.T.S

The WildC.A.T.S were a relatively basic concept that got a lot more complicated as time went on, but essentially this is a covert action team composed mostly of human-alien hybrids. They are recruited by the billionaire Marlowe to join in his fight against the alien race the Daemonites, who have long been at war with the Kherubim species. Ultimately, the team discovers that the Daemonite and Kherubim war actually ended a long time ago, with the Kherubim having emerged as the winners. The remaining Daemonites live in impoverished neighborhoods and struggle to survive the cruelty of the victors of the war, while the WildC.A.T.S discover that they have been merely along for the ride.

Voodoo is both Daemonite and Kherubim and served as the point-of-view character for the first WildC.A.T.S story. She works in a strip club and is immediately much more down-to-earth than anyone else on the team. The WildC.A.T.S save her from certain death at the hands of the Daemonites. When they go into deep space to meet the alien species they have been fighting for, she is thrown to the wilds due to her Daemonite ancestry, and she becomes disillusioned with her teammates. Easily seduced by promises of power, they barely notice what she and the rest of the Daemonites are going through, and the fallout is almost too much for the team to bear.

Priscilla Kitaen, This Is Your Extremely Improbable Life

After leaving the WildC.A.T.S, Priscilla starts working at a new strip club and begins studying actual voodoo in her first solo series, but that series is not an easy read and it doesn't particularly go anywhere. She ostensibly rejoins the WildC.A.T.S in Volume 3, in which she pairs up alongside (and eventually starts a romantic relationship with) former teammate Maul despite his emphatic lack of appeal. She loses her legs but is taught to regrow them only a few issues later by a Daemonite elder, which is just one example of the bonkers things Priscilla casually survives throughout her time with the team.

She is present for the fourth and fifth incarnations of the book, but only just barely. After the WildC.A.T.S were bought along with the rest of Wildstorm by DC Comics, Voodoo was rebooted along with several other former teammates for New 52. Her second solo series fares only slightly better than her first, pitting her against her own clone in a story that gets well away from itself within its first few pages. On the other hand, watching Priscilla versus Priscilla is a lot of fun at certain points, giving a tangible presence to her often conflicted inner monologue.

Yet We Are Forced to Stan

Priscilla has one of those characters who just keeps getting sucked into continuity rabbit holes, so it's amazing that she's made her way back from Limbo so many times. It certainly says something about the appeal of her character that fans and creators keep returning to her despite having what amounts to a fairly questionable run of stories under her belt. There's still a lot to like about Voodoo. She's funny, realistic, tenacious, and had a deeper understanding of the unjust underbelly of society than any of her other teammates. While the other WildC.A.T.S fly off into isolation and detachment at the drop of a hat, Voodoo is always there to call them back to reality.

Positive portrayals of sex workers or acknowledgment of a character's bisexuality in comics are slim, so it's important that Voodoo's autonomy is emphasized in her sexuality as well as in her career of choice and that she never apologizes for it. In fact, her career as a dancer is quite possibly the most stable thing in her life. It is also true that most of Voodoo's appearances have been men writing men interacting badly with her, which hasn't given much time to develop strong personality traits besides "tough girl, doesn't cry!" and "cool girl, not like other girls!" Her character is strong enough that even with all the tropes, she still has some of the best dialogue in comics.

Priscilla recently showed up in Warren Ellis' The Wild Storm, which reimagined a lot of the original Wildstorm characters. For Priscilla, that meant a career switch from a dancer to a pop star. This change didn't particularly go anywhere, and she is a minor character in the arc. While The Wild Storm is one of the best comics of the last few years, it's also kind of a bummer to see Voodoo's history as a sex worker, as well as her overall presence, reduced. We're hoping she makes a comeback soon.

Voodoo is one of those characters who are a lot more interesting than comics have allowed them to fully become as of yet. She may not have gotten her due, but she has a strong fan following. Priscilla is a lot of fun even when the stories she shows up in aren't exactly great. Her rebellious commitment to actually enjoying her life certainly stands out in stark contrast to every other member of the WildC.A.T.S, whose depressive inner monologues tend to define much of the series. Indeed, sometimes the differences between her and her teammates are so great that writers don't seem to know quite what to do with her, but even then, she still manages to class up this team of grungy warriors and assassins she finds herself on. Here's to you, Priscilla Kitaen! 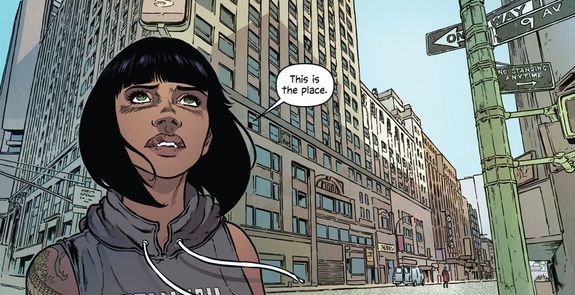 It's a fan thing
Join SYFY Insider to get access to exclusive videos and interviews, breaking news, sweepstakes, and more!
Sign Up for Free
All Posts About
Comics
Fangrrls
Merry Month of Bae
Related Stories

Why doesn’t Jupiter have even more spectacular rings than Saturn?