In the first half of its six-issue run, the Marvel event series War of the Realms seemed to be determined to earn the "war" in its name, delivering a fight on a scale that dwarfs even many other Marvel events, and claiming numerous casualties in the fight to stop the Dark Elf Malekith the Accursed from claiming every single realm as his own.

Now, with the series' fourth issue, more major heroes have fallen, and the consequences of those losses could be felt for a long time.

Writer Jason Aaron and artist Russell Dauterman made it very clear they weren't kidding around with War of the Realms in the very first issue, when Malekith's forces invaded Manhattan and the Frost Giant Laufey ate Loki, his own son, alive. Things only got worse in the second issue, as a spell meant to teleport civilians away from the carnage also took the Avengers away from Manhattan. With her allies suddenly vanished, Brunnhilde the Valkyrie fought to her last breath, and made the ultimate sacrifice.

Issue #4 picks up as our heroes, led by Thor's mother Freyja, plan to use Malekith's Black Bifrost to transport various allies from the other realms back to Midgard (aka Earth) to fight alongside them, while they also work to destroy the Black Bifrost to cut off both Malekith's escape and his supply of reinforcements. The only catch is that someone has to hold the bridge while they're doing all of that, and Freyja is just the goddess for the job.

When Odin, down for the count since his own near-death in the first issue, learns of this, he tries to storm out and help his wife. Tony Stark anticipated this, and so he worked up some brand-new merging of his own tech, Shuri's brilliance with vibranium, and the dwarf Screwbeard's own knack for forging. All of this combined to bring us one of the most Metal moments in the entire event: the Iron All-Father. 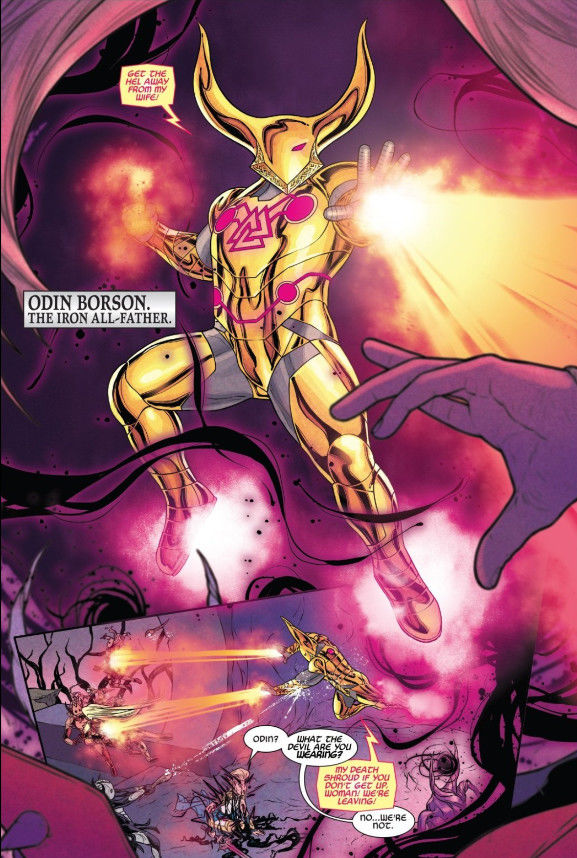 Odin and Freyja are joined side by side in combat, and fighting together actually seems to be re-sparking their attraction for one another. It doesn't last, though. The two Asgardian rulers manage to destroy the Black Bifrost, but they're caught up in the destruction and don't seem to make it out alive.

So Asgard's already heavy losses get even heavier. The good news, though, is that Thor has made his way back from Jotunheim with the help of the Avengers, and he's got a hammer, and an ax, and a metal arm he took from the Destroyer. Thor vows to lead the fight on behalf of all the surviving heroes now, with Jane Foster serving as the interim All-Mother at his side.

Obviously, these deaths might not last. We already know Loki's coming back in his own solo series later this year (though we don't know how), and Jane Foster's going to be taking over as Valkyrie soon, so she can't remain All-Mother forever. This does position Thor in a new place in terms of his potential leadership capacity, though. Aaron's years-long run with the character has shown us Thor as a failure, Thor as a king, Thor as precocious young god, and everything in between. Now we might see a bit more of Thor as a determined general on his way to becoming All-Father.

Also, with any luck, we'll get an Iron All-Father miniseries somewhere down the line, even if it's an alternate timeline.

War of the Realms continues with its penultimate issue on June 5.