Ben Hargreeves might possibly be the most influential yet least known character in Netflix’s new hit show The Umbrella Academy.

Based on the graphic novel series of the same name written by Gerard Way (who also serves as the show’s executive producer) and drawn by Gabriel Bá, Ben’s character (codename "The Horror") was the sixth of the original seven children to be adopted by Sir Reginald Hargreeves. He is also the reason that the team disbanded after his death. In Season 1 we only saw his character alive in a few flashbacks, but his ghost spoke with Klaus (aka “The Seance”) often. Although the graphic novel does give a little more insight into Ben’s character, the circumstances surrounding his death are not completely clear there either. 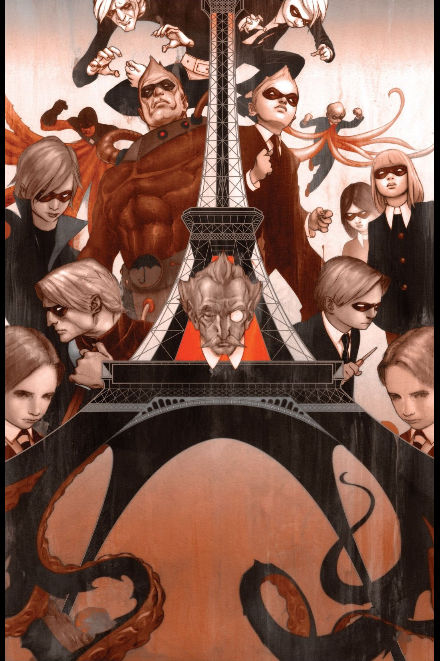 Ben’s powers are unique to the group. He has the ability to channel “eldritch creatures” through a portal to another dimension under his skin, in or around his belly button. (In other words, if this were Stranger Things, Ben isn’t the Demigorgon, he’s actually the tree that it emerges from.) He definitely has control over the creatures to an extent, as they never seem to leave his body completely or act on their own. Nevertheless, the creatures are vicious, as we witness in Episode 1 when Ben stops, or seemingly eviscerates, would-be bank robbers offscreen.

What is obvious in that scene is that Ben doesn’t care for using his powers, or for being a superhero at all, for that matter. As a child on the show he seems despondent and sad, a contrast to his comic book persona, which was very innocent and sweet. In fact in the first volume of the graphic novel, The Umbrella Academy: Apocalypse Suite, Vanya writes in her memoir that Ben was eager to please their Father: “He was easily manipulated, dragged into Father and Luther’s little games and the two simply let him die.”

Did they, though? Given Vanya’s penchant for the dramatic and her hatred of their father and their upbringing, it’s hard to tell.

Both in the comic and in the series, Luther, the leader of the group, spends four years on the moon with a robot assistant he calls Ben (possibly named out of guilt for his fallen brother). However, Number 1 was also controlled and manipulated by Daddy Hargreeves, who had a penchant for the near-torturous training of his children. Remember Klaus’ terrifying flashback in Episode 4, when as a child he is locked inside a dark mausoleum for days to rid him of his fear of the ghosts he couldn’t help but see? It’s possible that Ben was pushed to his limit physically by Hargreeves through Luther, to rid him of his fear. 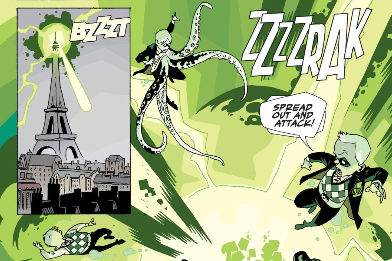 In the comics, it’s assumed that Ben died on a mission, and his statue in the courtyard of the school enforces this idea, as his effigy stands with cape blowing in the wind, mask firmly in place, with a single tentacle protruding from his body. The statue of Ben on the show just displays a boy in a school uniform.

The only thing that the graphic novel series and the show agree on surrounding Ben’s death is that he was an adult when it happened. Ben can be seen in costume in flashbacks as an adult on missions with the team. And in the Netflix Umbrella Universe, Klaus sees Ben only as an adult. The Seance can also see how people died, in gory detail, actually (like Cha Cha and Hazel’s victims in Episode 4). But on the show, Ben’s apparition (played by Justin H. Min) appears to Klaus unharmed in a hoodie and leather jacket like a bored ASOS model. So either Ben took his own life in a way that didn’t leave any visible marks or Klaus has no idea how he died.

Fans have definitely latched onto that theory; in fact, Reddit user Hadesman1 has an even more detailed theory around Ben’s possible suicide: that the process of using Ben’s powers became so physically and mentally painful for him as an adult that he slit his own wrists. But since his ghost is always in a leather jacket, we can’t see the wounds.

In a recent interview with Forbes, Way admitted that he hasn’t answered that question yet himself: “I never really answered that. I originally just wrote the character to be dead, that was his function.” Hopefully, the Netflix series will reveal exactly how Ben died ... and where he got that nice leather jacket.

It's a fan thing
Join SYFY Insider to get access to exclusive videos and interviews, breaking news, sweepstakes, and more!
Sign Up for Free
All Posts About
Features
TV
Gabriel Ba
Gerard Way
Netflix
The Umbrella Academy
Related Stories

'Knock at the Cabin': What are critics saying?

'Pitch Black' and the science of night vision