First up, if you loved what the Metal event and the Batman Who Laughs did to open up the Dark Multiverse to the DC Universe, DC Comics is releasing one-shots that will release prestige format one-shots in November called Tales From the Dark Multiverse telling stories about how major DCU events have been affected. 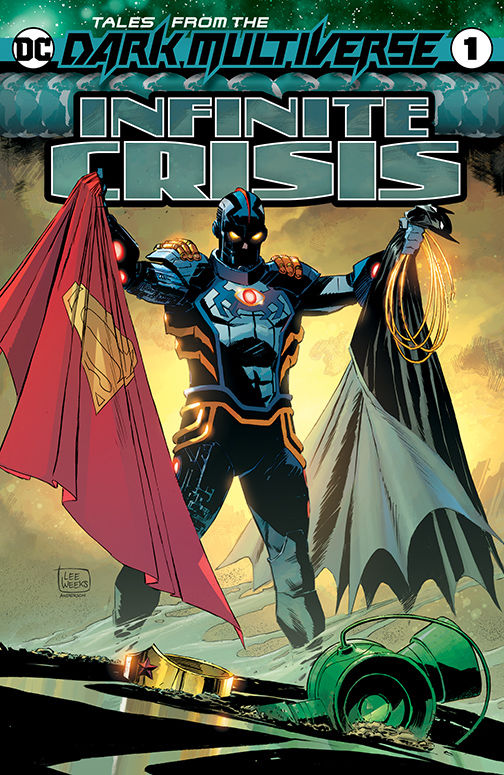 Tales From the Dark Multiverse: Infinite Crisis #1
Written by  James Tynion IV, Art by Aaron Lopresti and Matt Ryan, and Cover by Lee Weeks
November  27, $5.99
The destruction of Superman, Batman, and Wonder Woman, the rise of Alexander Luthor and Superboy-Prime, and the rebirth of the Multiverse all began with Ted Kord, the Blue Beetle. Kord saw it all coming and died with secrets that could have saved the world. But in the Dark Multiverse, Blue Beetle survives, and with the death of Maxwell Lord by his hand, Ted sets off events that irreversibly alter the lives of not only the Justice League, but also his best friend, Booster Gold. In trying to prevent a crisis, Blue Beetle becomes the crisis, and the Dark Multiverse will never be the same.

Tales From the Dark Multiverse: Blackest Night #1
Written by Tim Seeley, Art by  Kyle Hotz, and Cover by Lee Weeks
November 13, $5.99
The quintessential Green Lantern story Blackest Night will be revisited but this time the Black Lanterns prevail. 23 days after the event, Sinestro is "trapped between life and death as a  White and a Black Lantern, emerges as the world's last hope as  Limbo Lantern. We've got an exclusive look at Limbo Lantern, see below. This 48-page one-shot will also guest-star Dove, Lobo and Mister Miracle who team up with Limbo Lantern to save the world.

DC will also make Blackest Night #1 and Infinite Crisis #1 for available again for $1.

Heading over to Marvel news, the publisher is announcing two solo mini-series. The first is stemming from a rise in popularity from the Guardians of the Galaxy films in the Marvel Cinematic Universe, Yondu Udonta is getting a spotlight story, Yondu, co-written by Zac Thompson and Lonnie Nadler with fan-favorite John McCrea (Hitman, Dead Eyes) handling art chores. Cully Hamner is doing covers.

Initially reported at ComicBook, the blue-skinned Ravager is on the cusp of striking it rich when he comes across a new weapon. But his interest in this artifact draws the attention of a mysterious mercenary and he must consider if this deadly weapon is worth all the trouble.

The creative team says they're approaching Yondu as a blank slate whose history has never been established and it's also an opportunity to do a street-level space comic in the Marvel cosmos. There's plenty of opportunity to introduce new planets, new aliens and new adventures. It's slated to be a space crime-comedy with neo Western elements.

Lastly, Marvel is using the upcoming Morbius film starring Jared Leto as a reason to increase the profile of the character.

Written by Vita Ayala, Art by Marcelo Ferreira and covers by Ryan Brown, Morbius #1 is set to hit the shelves in November, and build up the stories around Morbius ahead of the the July 2020 film. Ayala's take is going to center on Michael Morbius fast approaching a cure for his form of vampirism but it's not going to be an easy path as there's more "danger and mutations" in his way.

It's a fan thing
Join SYFY Insider to get access to exclusive videos and interviews, breaking news, sweepstakes, and more!
Sign Up for Free
All Posts About
Comics
News
Comics
DC Comics
Marvel
Morbius
Related Stories

Priced Out: At what point do comics become too expensive for fans?