On Dec. 31, the streaming company announced the superhero series was one of its most popular releases of 2019, in addition to Stranger Things 3 and The Umbrella Academy. The program was also named as Netflix's "most popular kids and family series for last year, cementing its renewal chances," per the report.

Based on Dennis Liu's comic book and short film of the same name, Raising Dion stars Alisha Wainwright as a single mother raising a super-powered son (Ja'Siah Young) after the death of her husband (Michael B. Jordan).

Carol Barbee will return as showrunner on the eight one-hour episodes contained within Season 2. Jordan is coming back as an executive producer alongside Kenny Goodman, Kim Roth, Dennis Liu, and Charles D. King’s MACRO.

Production is expected to begin sometime this year.

A new entry in the comic book world of Jupiter's Legacy is on its way, folks.

Mark Millar teased the beginning of his script for Jupiter's Requiem on Twitter today. While the artist for the 10-issue storyline is top secret right now, we do know that the very first page of Reqiuem begins on Earth 50,000 years ago.

HERE IS THE NEWS pic.twitter.com/bE5Rlszgo1

Millar, who has an overall deal with Netflix, is working on a small screen adaptation of Jupiter's Legacy, which deals with the children of famous superheroes trying to live up to the standard set by their parents.

Sang Kim was hired as a replacement showrunner in November after Steven DeKnight parted ways with the project over creative differences in September.

After more than a year of wondering how Disney would handle Josh Boone's New Mutants movie after the Fox buyout, the director was finally able to confirm that a new trailer is arriving this coming Monday (January 6).

Responding to a fan on Instagram, Boone promised that the movie coming out in April will adhere to his original vision for the horror-oriented project, which dropped its first trailer nearly three years ago. 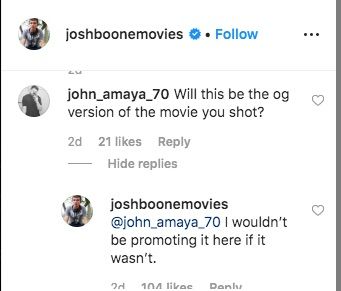 It's a fan thing
Join SYFY Insider to get access to exclusive videos and interviews, breaking news, sweepstakes, and more!
Sign Up for Free
All Posts About
Comics
News
TV
Jupiter's legacy
Mark Millar
Netflix
The New Mutants
WIRE Buzz
raising dion
You May Also Like
Recommended by Zergnet
Latest on SYFY WIRE