Worlds of Ursula K. Le Guin director on her 10-year journey with the late author

For 10 years, director Arwen Curry worked with celebrated science fiction author Ursula K. Le Guin on a documentary that would relate the groundbreaking writer's life story in her own words. Their collaboration resulted in the award-winning film, Worlds of Ursula K. Le Guin, which was released just a few months after the author passed away in 2018.

Curry gives audiences an intimate look at the prolific author's final years. The film provides the personal context of how Le Guin's seminal works came to be, as she wrestled with events in her personal life and the changing world around her that ultimately inspired her thoughtful and ambitious stories. As she rose up the literary ranks as a writer of profound intelligence and importance, Le Guin ended up changing the landscape for women writers in the genre, as well expanding the heights to which science fiction could aspire to be.

Worlds of Ursula K. Le Guin debuts on PBS' American Masters on August 2 and SYFY WIRE spoke with Curry about their poignant collaboration and how Le Guin's work remains as relevant as ever to our current times, while her stories remind humanity that the boundless realms of fantastical imagination can be the path to real change and self-understanding.

So much of making a documentary is finding the story, and the best way to tell it. Your film has intimate moments of Ursula in her later years, and animation and literary figures speaking of her body of work. When did the alchemy of that mix really start to solidify for you?

Arwen Curry: During the production phase, I was mostly concerned with making sure that I had the material from her, as much of the footage as I could get of her in her life. You know, just living her life and covering the material in our interviews that talked in detail about the books and talked about her own experiences and making sure I had all of that and then making sure I had the right balance of voices in the film as best as I could achieve it, and obviously all the production work that goes into setting those things up. I knew the themes that I wanted to cover and I knew some of what would be the major story arcs, but I hadn't written it out ahead of time.

That was a real learning curve for me and a very exciting one. At first, I wrote the scenes that I knew were important and started putting them together and trying to weave them together so that every discussion of a book would be connected to where she was in her life and to what was going on in the world. That was a long process. I had a wonderful collaborator, Jason Andrew Cohen, one of my co-producers who had been through that process before. We argued, we tangled, we struggled through it, so that process was ongoing for probably six months.

With the animation, I vacillated for a while about it because it felt very audacious to try to represent in any visual way these worlds. I didn't want to interfere with reader's visions of the worlds, so there was a time when I thought it would be safer to have really beautiful natural world footage that maybe would take us there. Then as we got deeper into it, it became clear that the viewers needed an opportunity to listen to her and be transported to this other place.

The final pieces that bring to life the characters and stories of Earthsea are very beautiful yet still abstract.

The two animators we worked with, they were working hard with a very clear sense of the honor of being able to do this. To try to show something a little slantwise, as Ursula used to say, is to not show something completely head on, but a little bit from the side. There is a distinction between the Earthsea animations, which are done by one animator for the three books that we show. Then the Hainish books are shown by the other animator, and those tend to be a little more prosaic and just straight forward because in those books, she had a very clear distinction about that too. The oil paintings are all actual oil paintings frame-by-frame. It was incredibly labor intensive and was a lot of collaboration.

As someone so adept at creating her own worlds, was it hard for her to give over her own life story to you to tell it in the way you saw fit?

I think it was a struggle. I would talk through a particularly sticky scene, or send her the script of how we were treating something like the Ishi scene. Things that I really knew that she was sensitive about, that people had gotten wrong before, that we really needed to get right. I would run these things by her because I really didn't want to make a film that she felt misrepresented her. So, we had that review process all the way through. But yeah, I think she had to let go of a lot. It was a huge amount of trust, and there were times when she was afraid that it wouldn't be right.

Did Ursula end up seeing the finished documentary before she passed away in 2018?

No, and it is a regret of mine. I always wanted her to be able to sit in the theater and watch the finished film. She watched a cut in December of 2017 and then she died in January of 2018, but the film wasn't finished until March. Those last couple of months are very important as that was when the music got really refined, and when the animations really became so finalized and beautiful and it was a shame that she couldn't see the polished version.

What lessons from her life did you walk away with that you maybe never expected to learn about her, and that have deeply impacted you as a storyteller as you go forward?

I didn't know quite how much I would learn about the creative process through just being with her. I never approached her as a writer, really. Maybe with a couple of exceptions and I didn't talk through troubles in my creative process unless we had to work through them together. And yet by both talking with her and spending so much time with her story itself, trying to shape her story and into this film, some parts of her approach to her own work became so important to me and became really internalized. I hope that I can hold onto them as long as possible. One of them is the ability to accept criticism. Maybe react defensively to it, but then to take it in, and to listen to it deeply, and to hear the parts that are true and change. 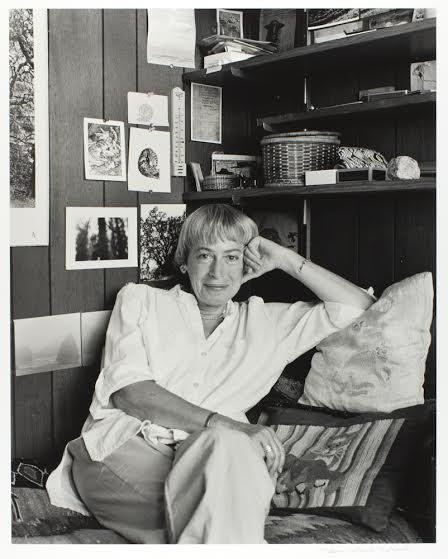 It was amazing to hear in her own words how she processed criticism and found the courage to listen to it and make change.

She was a very gracious person and it is a question of grace, but it's also a question of creative survival because if you're not able to pivot, to divert your path because it wasn't quite the right path, then you might have to stop, right? Because she was able to do that, she was able to have all of these iterations of her work and all these levels of maturity within her career that kept her writing all these books that we now have. If she didn't have that quality of character, her career could very easily have stopped in the mid-'70s. This is a lesson that I take to heart very much. And here are many others about how to comport yourself in the world, how to protect yourself as an artist, make time for your art and also for your family and these levels of balance.

Having been in her orbit for a decade, do you think there is a piece of her work that she would recommend people read right now?

She thought of some of her works that got underappreciated as she always wanted to push those forward. But I would probably say that it would be one of the latest books of essays because those are so sharp and they're so valuable and she's always willing to turn something over to a side you hadn't looked at before. So, The Unreal and the Real: The Selected Stories of Ursula Le Guin.

And you can always say read The Left Hand of Darkness first, but there's going to be a certain group of people who doesn't get it, who doesn't like it, and maybe they'll drop off of Ursula. But I think if you start with those essays, or you start with a short story collection, you can get a greater sense of the scope of her powers. So, I would start there.

What are you hoping that this film will do in terms of illuminating Ursula to her existing fans, and new readers?

We're coming to the end of about a year of thing being in film festivals and limited theatrical runs, so being in front of audiences makes it clear that we did succeed in both satisfying the people who already loved her and knew her, and the people who didn't know her. It's a hard balance to strike.

I guess to answer your question, we're in a moment when the challenges seem insurmountable at times. There was something comforting about her as a person, knowing that she was out there. I hope that the lesson that can come through for people is that we can both have joy and comfort in our lives, and keep working toward change. We don't have to look at everything through the lens of disaster, even while there's disaster around us. That might not be the most helpful way to look at it.

Her biographer, Julie Phillips, called her the éminence grise of the American imagination. She was this champion of the imagination and it's not a trivial thing. It's not something only for children. It's actually a question of survival. If we're going to get through this moment, if we're going to have a better world, we have to first be able to conceive it. And in order to conceive it, we have to try and write it down. We have to work it out. We have to think of all the factors. And those factors are not just about technology, and they're not just about questions of war and peace. They're questions about how we structure our societies and how we treat each other as human beings. She has, throughout her work, demanded that we use our imagination. She continues to do that through her work, after her death.