Even the Critical Role cast has debates about Dungeons & Dragons rules

In a game of Dungeons & Dragons, the Dungeon Master is the ultimate arbiter — they have the final say on any and all rules and judgments. But that doesn’t mean there can’t be debates across the table in the heat of battle against a terrifying litch or horde of goblins. (And a good DM should be willing to hear out their players' cases, even if they might not save you from a devastating fireball.)

The cast of D&D web series Critical Role are hardened, elite adventurers, but they’ve had their share of (good-natured) debates and misunderstandings over the course of two D&D campaigns. Matt Mercer, the DM, ultimately calls the shots, but he’s often surprised — both delighted and frustrated — with the unexpected moves and shenanigans his players, including Laura Bailey and Liam O’Brien, get up to. And the players respect their DM, even if they won’t pass up an opportunity to get a rise out of him.

In anticipation of the entire Critical Role cast’s appearance on SYFY WIRE’s The Great Debate (which airs on Thursday, July 30, at 11 p.m. Eastern), SYFY WIRE caught up with Mercer, Bailey, and O’Brien to talk about some of their tabletop disagreements. In part two of our conversation, the trio discussed different approaches to reading new D&D sourcebooks, engaged in the sort of friendly teasing you might expect from people who played twins, and remembered one of the first campaign’s most infamous items (at least when it came to upending the action economy). 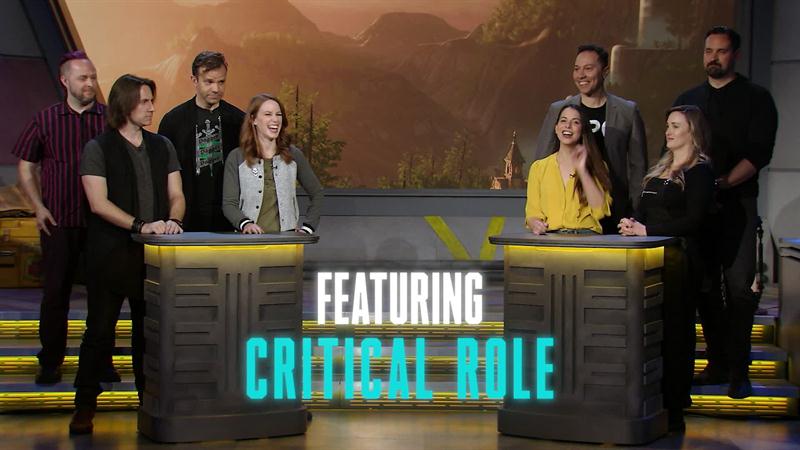 While Critical Role was on hiatus, Wizards has released a new sourcebook, The Mythic Odysseys of Theros. (Well, I guess two sourcebooks, since The Explorer's Guide to Wildemount came out while you guys were paused.) And it's also announced the next adventure, Icewind Dale: Rime of the Frostmaiden. Are there things in new D&D books that you guys are excited about? Maybe something for Matt to incorporate into the current campaign or for the players to consider for your next characters?

Mercer: I’m excited about Theros because it is a higher-level setting and most D&D campaigns — and this is on a statistical level — most D&D campaigns don't go to the higher levels, the upper echelon, unless they start there. So there aren’t a lot of books that cater to the higher tier of gameplay, and I think Theros is intentionally carrying a lot more content in that direction. And as a DM who often runs games into these higher levels, it’s nice to have more material to pull from, so I’m excited for that.

Bailey: Usually with new sourcebooks, this might sound stupid, but I tend to not delve too far into them, because I love to be surprised and I want to have the actual reaction when we’re playing the game of having a new monster being unleashed or something that I’ve never heard of. So I don’t do research to figure out what the different things are that we could be coming across or anything like that. Outside of new spells, I always like to take advantage of that.

O’Brien: Well, I totally disagree with Laura. I love the history of D&D, I love seeing all these things —

O’Brien: I know, but all I’m saying is, I can’t resist looking in them, because a lot of it is just taking things that I loved a long time ago and fleshing them out further, making them richer, making them relevant to today. I love seeing Demogorgon — the way he was portrayed upon origin and then how he has evolved over the years. Often when we’re at the table (sometimes, not always, because Matt pulls things out of his butt so much), but a creature will show up and I’ll clap my hands in my mind and go, “It’s that thing I’ve watched evolve over the years!”

Bailey: But then you know how to fight it.

O’Brien: No, I don’t. I just kind of know what it looks like, Laura.

Mercer: And to be fair, if it’s something iconic, there’s a good chance I’ve changed a lot about it just for that reason.

Bailey: Oh, really, so I can do research and it’s OK?

Mercer: I mean, you’re welcome to. Just make sure it doesn’t turn into some serious metagaming.

I was gonna say — metagaming has never really been an issue for you guys at the table.

Mercer: It’s honestly not been. All the players even — if they have the knowledge — they only play into their character’s knowledge. You’ll see them make the decision. “I know I shouldn’t be doing this, but my character doesn’t know, and so I do this.” Everyone’s done it, which I think is key to building that trust where I’m like, “Yeah, go ahead. Read the materials, because I know my players won’t [metagame].” Now, I’m giving Laura crap about that because I know she won’t do it. It’s more just playful teasing. We trust each other.

O’Brien: So many of the best moments come when everything goes wrong. There’s no winning D&D, it’s just what’s happening in the moment.

Bailey: And we do often.

Laura and Liam, do either of you have a favorite class to play in D&D? Not favorite character, necessarily — I wouldn’t want you to pick favorites between Vax and Vex and Caleb and Jester. But from a gameplay perspective, is there a role or class that you really enjoy?

O’Brien: Yes, the best class, which is rogue.

Bailey: Honestly I was gonna say rogue. I think rogues are amazing.

Matt, do you have a favorite class for those rare occasions when you do get to play?

Mercer: Oh, yeah, bard all the way. Bards are so versatile because their whole skill set comes from storytelling and storytelling has so many different mediums. A lot of times it’s not aggressive if you don’t want it to be. It can be an unaggressive thing, it can be a supportive thing, it can be a nuanced, weird interpretation of how you engage and gain higher ground in a conflict.

Bards got a lot of crap back in the day because they, on paper, looked less effective than other classes, but to me, they’ve always been weird and interesting with a great toolbox. And Fifth Edition, in particular, really kind of gave them a powerset that made them highly competitive with other classes, even on paper. So I’m a big fan of the bard.

Because you’re appearing on SYFY WIRE’s The Great Debate, I have to ask: Are there any D&D rules that the Critical Role cast can’t totally agree on? Like, does somebody wish that flanking worked differently in Wildemount?

O’Brien: I think there was a little debate on the action economy of the rogue class at higher levels.

Mercer: Yeah, that was a combination of rogue action economy and Haste Boots action economy, and I don’t know. Just, it was a problem.

O’Brien: I was speaking in Morse code all those times. You guys didn’t know.

Mercer: It’s hard for me to speak on [rule debates] because, logistically, if I don’t like a rule, I’m allowed to change it.

Bailey: This is true. And, you know, if we don’t agree on a rule we usually just defer to Matt.

Mercer: You know I’m not trying to screw you guys over. If there’s something you really don’t like and you voice it, I’ll find a way to tweak it to make it fun, because, ultimately, at the end of the day, the purpose of this is we all have fun. If something is preventing that, it can be tweaked.

O’Brien: The cast recently discussed the possibility of the entire group taking the Luck feat on one level up and sucking all the joy out of Matt ...