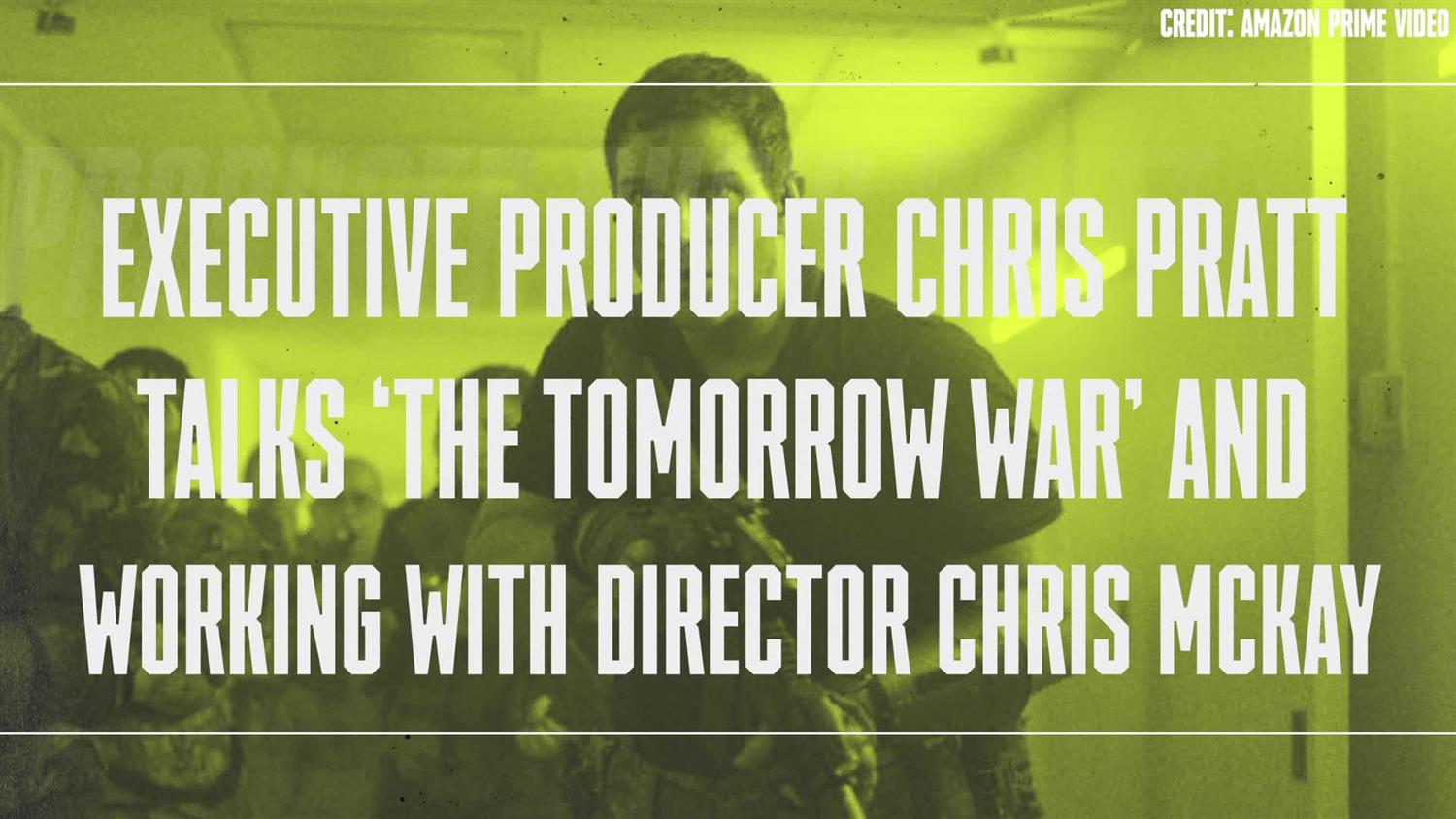 We love the smell of temporal displacement in the morning! For a good chunk of its runtime, The Tomorrow War presents an odyssey through a war-torn future in which humanity has been driven to the brink of extinction by a relentless race of alien creatures. The planet's only hope of defeating the invaders is by recruiting a wellspring of able-bodied soldiers 30 years in the past.

If Francis Ford Coppola had made the film (arriving on Amazon Prime early next month), he might have titled it "Apocalypse Tomorrow." But Coppola didn't make it — the director's seat on this project was occupied by Chris McKay, who comes from a background in animation (his last feature was 2017's The LEGO Batman Movie).

During a recent press junket for the movie, SYFY WIRE asked the cast, including leading man/executive producer Chris Pratt, how McKay's experience as an animator might have transferred over to his live-action debut. The Guardians of the Galaxy actor plays Dan Forester, a high school science teacher with a military background who finds himself drafted into the future fight.

"I think you see [McKay's] expertise really play out in the third and final processes of making a film like this, which is the edit," Pratt tells SYFY WIRE. "He really polished this film and cut together an amazing film. I think him being on set was a big learning process for him as a director, just like it was a learning process for me as an executive producer. He's used to sitting in a room and cutting things together and putting together animated films. And he did an amazing job — he really took to it. He's a great leader, has great ideas, is really open to collaboration, has a really youthful spirit, and is having a lot of fun the whole time. It's a stressful situation and I think he handled it really well."

Pratt's co-star, Edwin Hodge (the Sleepy Hollow vet plays Dorian, a jaded soldier with several future tours under his belt), recalls that McKay "was very reliant on those who had knowledge about certain particular things to add to his idea and vice versa. Like Chris Pratt said, when he got into the editing room, you can kind of tell that the animation world that he was in, he brought it to the film just because of the way it was cut and edited, and it doesn't stop moving. It really doesn't."

"When it came time to really exploring the deeper parts of the characters, he [McKay] was so there for it and so wanting us to have a more in-depth experience to really create that deeper layer of the movie that is one of the surprise elements in watching it," Strahovski explains.

Before he's jolted into the future, Dan meets his fellow brothers-in-arms like Dorian and Charlie. Played by Sam Richardson (Werewolves Within), Charlie is a scientist whose nervous chatter provides a good deal of The Tomorrow War's comic relief. "I feel that he has such a great macro-view for this," Richardson says of McKay. "I think with him having directed scenes in LEGO, where you're looking at the whole thing, I think he can approach it that way, so that things weren't overwhelming to him. It's like playing with toys, but the toys are 200 pounds each and with opposable thumbs."

When we asked about his approach to playing Charlie, the actor reveals that he simply imagined how a normal person would react to being asked to fight a horde of deadly aliens in another time period. "I thought it was fun to have a character who is very much what you and I would do in that world," he adds. "Or your average audience member being thrown into this circumstance — how would they behave? ... He feels very powerless and so, as a defense mechanism, he just talks a lot because he's overwhelmed. I think that's a very relatable human thing."

On the other end of the spectrum, you've got Lieutenant Hart (Heathers' Jasmine Mathews) and Major Greenwood (Before I Fall's Keith Powers) a pair of hardened soldiers from the quantum war. Powers tells us he focused on "confidence and leadership" for his performance while Mathews harkened back to her days of karate training.

"Of being like this warrior and the confidence you had to go and have when you were about to fight in a tournament," she explains. "And just how hard you had to be in order to look at somebody as an opponent. I really took that and sort of stretched it out [and] exaggerated it."

On the topic of McKay, Powers describes the filmmaker as "playful." He continues: "One thing that really stood out is how he really just wants you to bring yourself into the film. He wants you. And I thought that was so cool because we're in this action world, we're in this world where this war is happening and he's like, 'What would you say here? What would you do here?' I loved that because that's how you give your character soul."

"As spontaneous and playful as he is, he's so specific. He pays attention so closely," Mathews concludes. "He would often say, 'You know that thing you just did here? Lean more into that.' He was able to bring what you were naturally doing out even more. Sometimes, I was like, 'Oh, I was doing that? Thank you for telling me!' So, I thought that was really cool as well."

The Tomorrow War is already streaming on Prime Video three weeks from now. Those of us living in the present with no access to time travel have to wait until Friday, July 2, to check it out for ourselves. Originally slated for an exclusive release in theaters this summer by way of Paramount, the film was eventually scooped up by Amazon this past April in a massive $200 million deal.