31 thoughts we had while watching Scorpion King: Book of Souls

You may have that known of the existence of a Scorpion King movie that was a spin-off of the Mummy franchise, starring Dwayne "The Rock" Johnson in the title role. It made sense to give the final boss of The Mummy Returns his own movie given the Rock's immense popularity and the commercial success of the film (and for a chance to give some much-needed context for that awful CGI half-man, half-scorpion).

What you may not have known is the Scorpion King is its own franchise, with four sequels to its name. The fifth installment was given a direct-to-streaming release and sent to the basement levels of Netflix. We ventured down into the bowels of our to-watch lists with our flashlight turned to maximum brightness and endured Scorpion King: Book of Souls. The experience left us with 32 thoughts on the latest addition we now share for your entertainment.

1. As the opening sequence takes place, I’m wondering several things. Like, why did I agree to watch this? Why don’t I value my time more? Why on earth does this movie make the Sword of Anubis seem like a mashup between an infomercial for virility pills and fitness videos? Do those things actually go together? 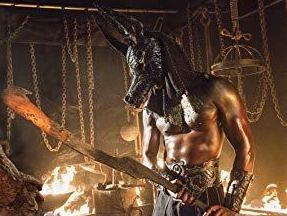 2. You know you’re in for a long movie in the hot desert when a king makes a covenant with an Egyptian god and the terms and conditions are written on the very edge of a blade.

3. Everyone is extremely fit. This movie should have been called Scorpion King: Book of Ripped Bods. Everyone has CrossFit legs and abs you could grate cheese on. How much body oil was in the production budget? 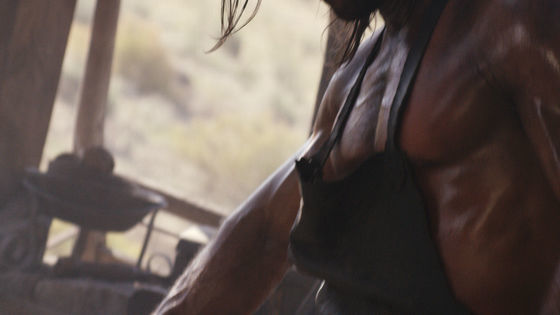 4. Not that I don’t like looking at sexy people slathered in seven different kinds of body oil, but how did we get Zach McGowan as the Scorpion King? I guess to find out I would have to watch the previous three installments. I refuse. I don’t need to understand that badly.

5. This movie sticks to the formula wherein our hero’s adoptive home gets ransacked by people sent to capture/kill him, and then someone who means something to the hero gets slain in front of him. When will these small villages learn to turn away guys who are looking to go incognito? It never goes well for them.

6. Maybe I’m just really out of touch with the Scorpion King lore, but it felt way too on the nose to have Mathayus, McGowan’s character, stung over and over again by scorpions to bring him back to life.

8. Also, they really could have just called him Matt for short. It makes more sense too.

9. This movie was filmed and edited like a music video from the early '90s. It's very grunge for all the wrong reasons.

10. It’s nice to see Pearl Thusi in an action role, and her whole aesthetic as the princess of Nubia is cute. 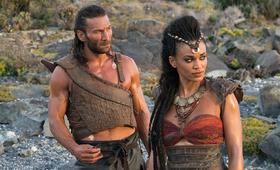 11. For a second I thought Matt and Princess Tala were going to be attacked by some mole people, but turns out it was just some folks covered in weightlifting chalk led by a guy who I’m pretty sure probably has a British accent.

13. How is it possible for everyone’s bodies to remain so perfectly oiled without a drop of sand sticking to anyone's skin? I’m distressed.

14. Surprisingly, I’ve seen more black and brown people on screen than I did in that Gods of Egypt movie and that actually had a theatrical release. What is life?

15. I thought I nodded off and started Stargate SG-1, because all of a sudden there was a portal randomly in the desert.

16. Once they walked through the portal, this movie briefly turns into Thor: Ragnarok. They even have a bootleg version Korg. This Korg looks like a dollar-store ripoff toy your parents would get you and hope you wouldn’t notice the difference.

17. Plot twist. Turns out the Book of Souls isn't an actual book, but a severely oiled-up woman. Honestly, I had completely forgotten about the book up until this point. She thankfully has a name other than Book of Souls: Amina. I sincerely thought they were going to have to refer to her as the Book of Souls for the remainder of the movie.

18. Midway through this movie and I’m still trying to figure out how we went from a poorly CGI-ed Dwayne "The Rock" Johnson in the Mummy Returns to an entire franchise of Scorpion King movies. Truly anything is possible.

19. We've seen fighting on horses, fighting near an ocean, fighting in a town, just fighting all the way around. Scorpion King: Book of Souls is a Dr. Seuss book.

20. Since Amina is the literally THE Book of Souls, she can see and feel those who are killed by the Sword of Anubis. This makes for an extremely awkward moment when she has to tell Princess Tala that she is now queen because she felt and saw Tala’s brother get killed. This woman is basically Bran Stark from Game of Thrones.

21. They keep going back to the antagonist, King Billy Blanks, and his little friend has the absolute worst cut wig. It's a brunette version of Harry’s hair from Dumb and Dumber, a movie I wish I was watching instead.

22. The wig is basically sitting atop this actress's scalp like a mop. Maybe it is a mop. Maybe the mop was detangled and then died. I think they were on a tight budget due to all of the oil.

23. Not watching this movie with a strong tall glass of water was a terrible mistake, almost as big a mistake as volunteering to watch it in the first place.

24. After more poorly choreographed fights we’ve finally made it to the last act. I feel relief welling up in me as though I’ve endured this movie for months rather than 70 minutes.

25. Matt the Scorpion King is brought back to life again by way of scorpion stings. I had no idea he had died or was on the verge of death until Tala started chanting, “Sting that, bitch” to the tune of Hustle & Flow’s “Whoop That Trick.” I’m kidding, but she was chanting something and he came back to life.

26. Our Dollar Tree Korg dies by way of fire. He was a golem, and according to Pokémon rules, rock types are supposed to be good against fire. Unfortunately, this movie did not get that memo.

27. As uneventful as this entire movie has been, the final fight between Matt the Scorpion King and King Billy Blanks still manages to be anticlimactic.

28. I thought Qyburn’s death in Game of Thrones was funny, but the death of King Billy Blanks might be just as funny, if not more so. The abs on Matt the Scorpion King aren't just for show, because he manages to fling King Billy Blanks almost 20 feet into a fire pit while lying on his back.

29. Of course, this movie wouldn't be ripe and ready for Spike TV if a woman didn’t sacrifice herself. Amina, the Book of Souls, walks into the Sword of Anubis, impaling herself to receive one first and final kiss from Matt the Scorpion King. She then glitters away like Odin in Thor: Ragnarok.

31. The narrator from the beginning comes back to tell us how Matt the Scorpion King has learned a valuable lesson and will always fight for what's right instead of finding another hideaway home in a small village. There will be no Scorpion King: House Hunters International. 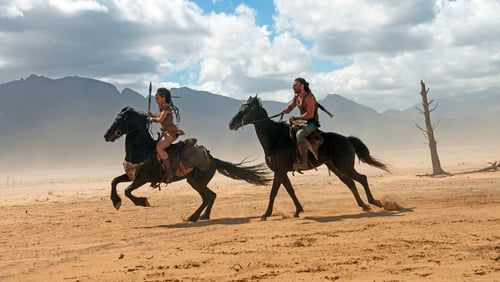