I spent a good amount of my college years skipping class from time to time to go to the movies. Sometimes it was worth it, other times not so much. 2008's The Day the Earth Stood Still was a movie that wasn't. Not even Keanu Reeves wearing a semi-tailored was enough, which is honestly a travesty.

It's been just about 11 years since the fateful day I decided to skip class for Keanu, and I still have some of the same thoughts I had back then. For one, I think aliens would probably still get us up out of here if they saw this movie.

1. The movie starts with a bearded Keanu from 1928 — which is promising — but I know better. 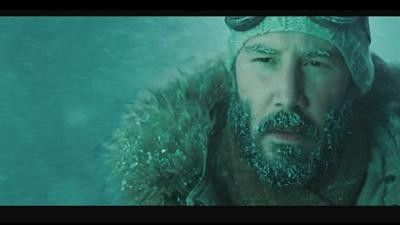 2. If there was a mysterious glowing orb near your campsite you'd go at it with a pickax too.

3. Jennifer Connelly was booked and busy once upon a time ago. I used to get her mixed up with Jordana Brewster a lot.

6. No wonder Jacob wasn't trying to have dinner. The food is looking very bland.

7. Not only did this poor boy lose a parent, but he also lost seasoned food along with them.

9. There is absolutely nothing at all suspicious about an entire motorcade driving down a shut-down freeway.

10. What exactly could the military do if there was an alien invasion, other than annoy the aliens?

12. New York City is an asteroid magnet, according to Hollywood.

14. The end of the world as they know it and the scientists are still being big nerds. It's a commitment.

16. No way they're wearing proper PPE.

18. What sense does it make to shoot at the entity that just pulled up to your planet with technology you never even dreamed existed?

19. I wonder if the gigantic humanoid robot is any kin to the one from Thor.

20. Actually, a gigantic humanoid robot is exactly why no one should be shooting at these alien visitors.

21. How will they perform an operation on a life form they know nothing about?

22. Keanu was wrapped up in a placenta burrito this whole time.

23. Who gives a damn about finances when there is a gigantic humanoid robot?

25. I always get a good hearty laugh when colonizers in sci-fi movies freak out because the earth is being invaded. Doesn't feel good, does it?

27. Kathy Bates is giving us call-the-manager realness in this movie.

30. I need some of that instant healing balm for my knees.

31. LOL at the fate of humanity getting hashed out in a McDonald's. It oddly adds up.

32. I'm so happy Jaden is just giving us bops and anime these days.

34. Jacob is on my LAST nerve in this movie.

35. If I had to rank this child in a list of children you wouldn't mind not surviving a sci-fi movie, Jacob would be in the top five — and not at number five.

36. Wow. Klaatu came to Earth like the Orkin Man. They're space exterminators.

37. Klaatu just Easy-Bake Oven'd someone back to life.

38. All the colonizers in this movie saying they could change is HILARIOUS.

40. The Earth doesn't stand a chance against those micro-locusts. Klaatu's employers are serious about restarting the Earth.

41. I love to see an asshole government type end up getting what they deserve: a horrendous death.

42. A stepmom and her stepson having a moment is what saved humanity. Dr. Phil could never.

43. The New York Giants can't catch a break. This movie made sure to destroy the hell out of MetLife Stadium.

44. And then the Earth indeed stood still behind a terrible green-screen backdrop.