Johnny Mnemonic is a cyberpunk dystopian fever dream you have after binge-watching too many old Flipper episodes. It's also the movie that tried to tell us Keanu Reeves was always destined to play the role of Neo in The Matrix. The main character Johnny is a beta version of Neo that essentially just needs a few adjustments before going fully online.

Johnny Mnemonic is a movie that leaves you asking yourself if you would mind a future in which Keanu, Ice-T, and a dolphin could really be the answer to solving overpriced healthcare costs in the United States of America. We found ourselves posing this very question while rewatching this '90s masterpiece and having an assortment of thoughts to go with them in our latest Deja View.

1. Post-coital Keanu alone makes the time dedicated to watching this movie worth it.

2. However, there is some disappointment with the boxers he is wearing. I sincerely wish they were boxer briefs or maybe no underwear at all.

3. Now I feel the urge to Google search for whether Keanu has ever done any Hanes or Calvin Klein ads.

4. OK, back to the movie. Looks like Johnny has been tasked with just one more job. How could it possibly go wrong? These things always go well.

5. Business suit Keanu Reeves? Perhaps this movie was trying to prepare us for John Wick, too.

6. Each time I watch this I'm somehow surprised by Ice-T being in it even though I absolutely shouldn't be.

7. Auxiliary port in your brain.

8. I wonder how many gigabytes I could store in my brain. I wonder if excessive coffee drinking affects it.

9. 320GB is totally not going to fit a storage capacity of 120GB but OK, Johnny. Who authorized this transaction? 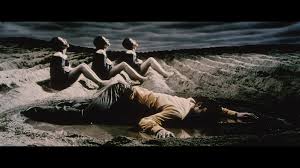 10. You absolutely do have a problem, sir! You don't have enough storage space in your brain!

11. Of course, scientists are targets for a hit. This wouldn't be a sci-fi movie if they weren't.

12. This download process looks a lot more painful than the first time someone enters the Matrix.

13. It's amazing all his teeth aren't broken up yet. The mouth guard Johnny is using must be state-of-the-art.

14. Keanu was auditioning for his role in The Matrix and didn't even know it. 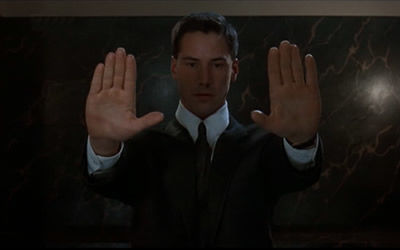 15. How were the people with the scientist so ill-prepared for a potential assassin hit?

16. Johnny should not be alive after all of that.

18. There are way more Black people than I could have anticipated. Actually, this future seems more diverse compared to others.

19. The TSA of the future also acts like WebMD. Johnny received a diagnosis free with a scan of his passport.

20. Out of all the wireless carriers, AT&T will reign supreme.

24. The guy getting hit in the chest with a knife thrown by Ice-T because he was too busy laughing will never not be funny.

26. Johnny is having a terrible day at work. His boss tried to ice him after a deal he set up went wrong. You hate to see it.

27. The woman from earlier looking to get hired as a bodyguard just showed the guy who paid her dust why he should have hired her. Love to see it.

28. Johnny could use an extra-strength Excedrin.

30. This internet is ridiculous. I wonder if there is an incognito mode.

34. You should always wear proper PPE when around liquid nitrogen.

35. Even when Johnny is dying, he is still a gentleman.

36. The healthcare system is trash in the future too.

38. This whole movie could have taken place at an Apple Genius Bar. Johnny probably would have died before he received any help, though.

39. Dolph is truly a menace in this movie.

40. Ice-T running a whole resistance. Sounds about right for the time.

41. The very first time Jones, the cyberpunk dolphin, was introduced I had to pause this movie.

43. The Yakuza clearly have stock in big pharma as much as they want to prevent the cure to NAS from getting out.

44. Johnny has to hack his own brain.

46. I don't know how they managed to do it but Keanu, Ice-T, and a dolphin really brought everyone free healthcare.

47. Give this movie an Academy Award.

It's a fan thing
Join SYFY Insider to get access to exclusive videos and interviews, breaking news, sweepstakes, and more!
Sign Up for Free
All Posts About
Fangrrls
Movies
Johnny Mnemonic
Keanu Reeves
Keanuvember
deja view
You May Also Like
Recommended by Zergnet
Latest on SYFY WIRE