49 thoughts we had while watching Battlefield Earth

If ever there was a time for divine intervention, the making of Battlefield Earth was that moment. John Travolta’s pet project is almost 20 years old and for 19 years I had avoided watching it. Until now.

I was shocked to learn Battlefield Earth was supposed to have a sequel because the film only covers the first half of the L. Ron Hubbard novel it's based on. So maybe the cosmos hasn’t fully forsaken us, since the sequel never happened. That said, I’d like to share my thoughts on a film I could have easily gone another 19 years without ever seeing and deeply wished I had.

1. The moment I pressed play I knew I was in for some mess. The puke-green font from a last-minute PowerPoint presentation was foreshadowing for never-ending transition using the split option.

2. This film is what I imagined a colonizer’s syphilis fever dream would be like. It's a dystopian future in which the majority of humans to have survived are white and can live out their indigenous fantasies. Reverse colonizer roleplay.

3. The main character yelling into the void after arriving a little too late to save his dying father is the first of many moments when I should have loved myself more and fled.

4. This isn’t cinematography. Whatever it is, though, is deeply upsetting. The angles made me want to physically fight.

5. The characters grunt a lot but also speak flawless English which is all so very annoying and confusing.

7. To the film’s credit, which hurts me to say, the appearance of a desolate Earth after society fell isn’t all that bad. This will be the only nice thing I can manage to say.

8. The Matrix influences are strong, and unfortunately, begin and end with all the slow-motion capture.

9. The moment the poor horse was shot was another in which I should have turned this film off.

10. I still don’t understand how the main character was shot in the back and commenced to go through several planes of glass and didn’t come out looking like grated cheese.

12. I ran out of wine 15 minutes in and am prepared to open another bottle.

13. The human processing center being in Denver, Colorado, was really funny to me because it was just random. Like this entire film.

14. The Psychlos are what happens when a Conehead and a Klingon enjoy each other's company after one too many cans of Four Loko. I mean that in the meanest way possible.

15. The wigs on all the Psychlos make the wig on Medusa from the Inhumans show look top tier. 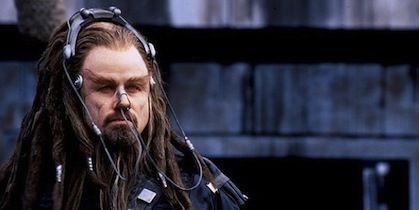 18. I just want Terl to try gargling with some bleach and see what happens.

19. John Travolta is both the best and worst when he is playing a villain. It’s actually hilarious that he is phoning in this performance, considering Battlefield Earth was his passion project.

20. I hope whatever bills Forest Whitaker had were paid off promptly after he subjected himself being in this film.

21. Terl not getting a promotion made me think of Office Space which has absolutely no connection to Battlefield Earth other than this film making me wish I was watching anything else instead.

22. I’ve heard the phrase man-animal more times than I’ve heard either "man" or "animal" in my entire time alive.

23. About 30 minutes into the Battlefield Earth I finally decided to Google the name character’s name. Jonnie Goodboy Tyler. Why?

24. Planet Psychlo looks like Cybertron. Cybertron, I am so sorry sweetie.

25. Terl is an entitled ass. Also, the eyebrows on these guys are very Professor Xavier-like which made me want to watch X3 because its a far better film by leaps and bounds.

26. Whatever the mushed mess the Psychlos are feeding the humans must have bits of the L. Ron Hubbard written works in it. I’m assuming his books exist in this world.

28. I really want to know how Whitaker ended up playing the character Ker. What did he owe and to who? Had to be Sallie Mae.

29. The cod pieces on the Psychlos are unsettling and they are telling me that both the actual fic and whatever fanfic exists should be avoided at all cost. 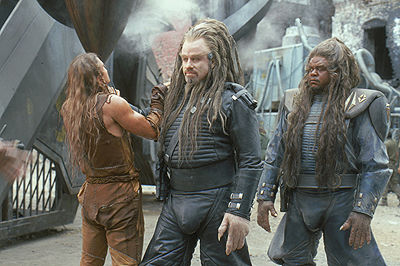 30. Battlefield Earth stinks. No, I mean like there is an actual odor coming from it.

31. Slow motion capture does make for great cinematography and I wished Battlefield Earth understood that.

32. If you decided to play a drinking game while watching Battlefield Earth, drinking each time you heard the word "leverage" you’d be in the hospital getting your stomach pumped.

33. According to Battlefield Earth, the way to get leverage over man-animals is to feed them rats. Uncooked raw rat. This makes the eating of raw rabbits in Us feel a little easier to stomach. Also, that’s a film I would watch 100 more times instead of Battlefield Earth. In fact, I would rather watch paint dry on Twitter by way of people tweeting about it than watch Battlefield Earth. 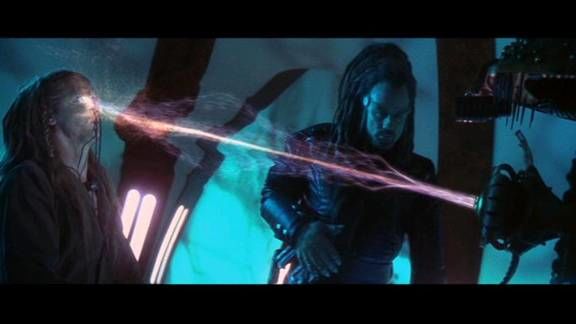 35. What is up with the Psychlos' entire aesthetic? It's space-Hot Topic but in a way that not even Hot Topic deserves.

36. Oh snaps, they gave one of the women in this film something to do.

37. The second time Terl tried to stuff a whole live rat into Jonnie’s mouth was another time I should have turned this film off.

38. Why did the Psychlos bother to learn English if they conquered the Earth in nine minutes?

39. Jonnie finding inspiration by way of reading the Declaration of Independence is another reminder this entire film is White Guy Nonsense TM. This scene was farting into a wine glass and smelling it right after to smell the notes of your own bullsh*t.

40. Where was PETA when Battlefield Earth allowed Psychlos to shot the legs off of innocent cows?

41. Of course, the thing they gave one of the women in the film to do was to ride right into being captured by Terl to be used as leverage against Jonnie. This is the first time the idea of leverage in this film was actually correct.

42. Now that our white savior, Jonnie, is all educated and what not, the rallying cry to fight against the Psychlos finally happens. I almost cheered myself because I thought this meant there were only 20 minutes left but to my dismay, there are still 50 whole minutes left to watch.

43. Terl is incompetent and could easily run for president in 2020.

44. How is possible that any of the things that Jonnie and friends find at the abandoned military base are still working 1000 years later? I guess tax dollars weren’t fully wasted but also whet?

45. They trained one week for this grand revolution against the Psychlos. A week. Seven days. 168 hours. 10,080 minutes. 604,800 seconds. That is all it takes to overthrow the same Psychlos who brought the human race to near extinction in nine minutes in the year 2000.

46. I had to rewind the scene of the Psychlo planet being blown up because I thought it was Earth at first. I mean in my defense I had an entire bottle of wine plus maybe an extra glass before this moment. Also, it wasn’t too far fetched that this movie would have ended with the Earth getting blown up.

47. The ending, like this entire movie, makes not an ounce of sense, but thinks it does.

48. How Battlefield Earth managed to get a 3% on Rotten Tomatoes is as astounding as Travolta’s persistence in getting this film made.

49. L. Ron Hubbard composed a soundtrack to accompany his novel Battlefield Earth and its called Space Jazz. Yes, yes, I did seek it out and, yes, it sounds exactly how you think it would.

Homo sapiens are older than we ever thought