The perfect utopia is in the eye of the beholder and anyone who feels differently can go eat a rat burger. Those are not my words but rather what the movie Demolition Man pretty much told me. Never has a hyper-masculine action hero hyper-masculated so hard that he destroyed an entire utopia the way John Spartan did. Whether or not he did San Angeles any favors is debatable, but if we're talking about a society in which Pizza Hut reigns supreme and you can be fined for swearing... there is enough evidence to argue he probably did.

Demolition Man is a quintessential '90s action movie that still has us wondering how the hell you use those three seashells some 27 years later. When we weren't asking that question, we had plenty of other thoughts on this fictional "utopia."

1. Wesley Snipes has Blade hair but it's just blonde.

2. There is just no way Stallone could be running as fast as the movie says he is while carrying Snipes to make it out of the building in time before the explosion.

3. Thermo scan doesn't seem like an effective way to check a building.

4. John Spartan is in the top five in hyper-masculine action hero names.

5. Cyro rehabilitation sounds like a start in the right direction for prison reform.

6. I honestly think Stallone and the writers just wanted an excuse to give us naked Stallone on the screen. I'm not entirely mad at that either.

7. The face Stallone makes when he freezes is the same face he made in all those Rocky movies when he took an uppercut to the face. An actor.

8. But seriously, is this really a utopia though?

9. "Be well." I think Walgreens also won one of those franchise wars.

10. The resistance is always living underground. 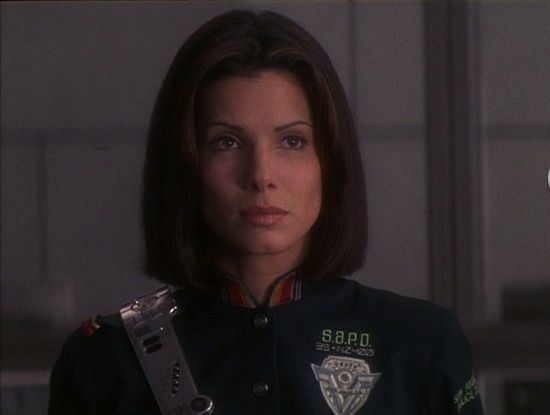 12. I wouldn't survive a day in this world. I'd be in the deepest freeze from cursing the moment I woke up.

13. It's hilarious that the Lethal Weapon franchise still exists in this universe and that Sandra's character has the third one's poster in her office.

14. Simon Phoenix took them out like it was a warm-up exercise.

15. OK, but how did he remove his eye so cleanly with only a pen?

17. Leiana is the only police officer with detective skills.

20. What a hell of plan it was to program a criminal in cyro sleep in order to carry out the plan some 30 years later. Like what if the cryo chambers malfunctioned or something and they died?

21. The police force in Demolition Man is actually trained to deescalate a situation. Go figure.

22. "We're police officers, we aren't trained to handle this kind of violence."

24. The way Leiana says "John Spartan" I just know she had copies of those videos of him in her personal collection.

26. Taking someone out of cyro sleep isn't as smooth of a process as I thought it would be.

28. Of course his wife is dead and of course it was by way of the big earthquake.

29. Is the entire world like this? Or just San Angeles? I need to know.

30. Anything spicy? This is a bland utopia.

31. STILL DON'T KNOW HOW TO USE THE THREE SEASHELLS!

33. The swearing alarm is probably getting the most work it's ever gotten since it was built.

34. This is for real a bland utopia because the songs are commercial jingles.

35. Okay, but why would the museum keep the ammo WITH guns?

36. No way this is a utopia with Pizza Hut being THE franchise of choice.

37. This underground group is reminiscent of Mad Max people. Dirty.

38. Her apartment is like the movie Ready Player One threw up in it.

41. Capitalism still exists in this society, so it's not a utopia.

42. Simon Phoenix is really turning this society upside down lol.

46. I'm actually really in awe of this muscle car still working almost 90 years later. It survived an earthquake and everything.

47. I love how Stallone is giving Sandra lessons in '90s catchphrases throughout this movie.

48. Why the hell is Jeffery Dahmer in cryo rehabilitation?

50. His head did not have to shatter like that. LOL!

51. So did John change the whole world or just San Angles? I need clarification.

52. I hope she didn't get mononucleosis after that kiss.

53. And how do those three seashells work? We'll never know.

It's a fan thing
Join SYFY Insider to get access to exclusive videos and interviews, breaking news, sweepstakes, and more!
Sign Up for Free
All Posts About
Fangrrls
Movies
Demolition Man
deja view
Related Stories