Don't you ever just feel like watching a movie that makes you feel terrified about the state of the world and the future? Something that makes you wish fiction didn't reflect reality so closely?

Well then, we've got a treat for you. The Day After Tomorrow is exactly the kind of film that will make you wish climate change were fiction and not a reality breathing down on our necks as we refuse to regulate the companies that are bringing about ecological destruction. Too real? Well, my bbs, buckle up.

When I pitched this Deja View, I was pretty sure I had never seen The Day After Tomorrow. But it turns out that's not the case. As the film progressed, I remembered the superstorms, the many, many deaths, and my favorite part: the wolves. 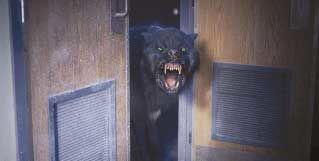 It turns out this cli-fi film-slash-waking-nightmare is one of my partner's favorites. (I think it's because they have a big crush on Jake Gyllenhaal and like a dad crush on Dennis Quaid, but that's a whole other article.) So I set aside my doubts, poured myself a strong drink, and watched the beginning of the next ice age.

1. The opening credits are just these sweeping vistas of so many glaciers and all I can think about is sad, starving polar bears.

3. Dennis Quaid's character is entirely too committed to his job. Man, your employer is not gonna take care of your family if you die in a wreck trying to save some glacial samples.

4. This film is eerily foreboding, especially given who is in the White House.

6. Bilbo believes in Jack and in global climate catastrophe — even if the myopic, puerile charlatan of a (vice) president doesn't.

7. For all the diverse settings of this film, this is a preeeeeeetty white main cast.

8. HOW OLD IS JAKE GYLLENHAAL'S CHARACTER IN THIS?! 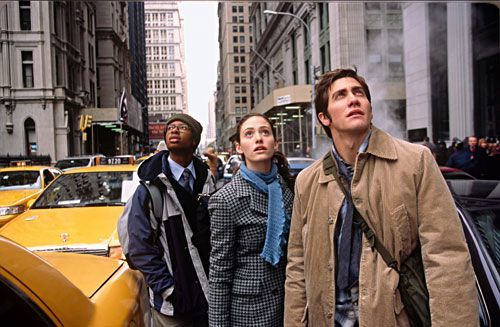 11. Sam's crush on his friend, Laura, is adorable. But Brian is the best nerd of the three of them.

12. Dennis Quaid reading emails in his underwear is me every time I have an idea for an article I'm writing.

13. Giant hail is so terrifying in part because we've already started getting larger and larger sizes of hail in Colorado.

14. This dude just watched his boss get crushed by a bus on live TV while he was on the phone with him.

15. OMG and a reporter just got taken out by a billboard while reporting on the tornadoes in L.A.

16. Ermahgerd and the dude from the phone just got destroyed by a tornado eating up part of the high rise.

17. I'm actually shocked at how well the special effects in this hold up. These tornadoes look real AF.

18. Janet Tokada (Tamlyn Tomita) is great. She's the only helpful person in a room full of climate scientists.

19. My partner and I keep stopping to look at each other and be like, LOL this isn't real. LOL. Right?!

20. I have watched so many people die in deeply personal and horrible ways in this film and it's only the 42:05 mark.

21. Who let the wolves out?! They let their selves out of this damn zoo. (I am definitely rooting for the wolves.)

22. This guy just made his way onto a bus in this storm and was like, "Oh I love buses. This will be fun." In the biggest storm anyone has ever seen. With water rising to people's waists.

23. A wall of water has just flooded NYC and oh sh** bus guy does not love buses anymore. He also does not love anything anymore because he is very much dead.

24. There's a guy who appears to be homeless who has a dog. Of course, everyone treats him terribly, but he keeps saving his dog from disaster and I have to say that might be the most relatable part of this whole movie. I would definitely be carrying my dog above my head in neck-deep water.

25. Bilbo and his research team have just realized there's no survival for them.

27. LOLOLOL this security guard just questioned if Brian should be fixing the radio and he said, "Sir, I am president of the Electronics Club, the Math Club, and the Chess Club. Now, if there's a bigger nerd in here, please ... point him out."

28. Everyone south of Denver is being told to evacuate south and if they're north of that, it's too freaking late.

29. Except Jack. He's donning some arctic gear and heading to Manhattan to get his kid.

30. Bilbo and his team shared a last toast and they toasted to England, humanity, and Manchester United. I mean, footballers gonna football I guess.

31. For being a pretty white bro-y movie, this film is surprisingly tender.

33. Hm. IDK about this reversal of U.S. refugees fleeing into Mexico.

34. They're deciding what books to burn and the librarians are all freaking out about burning Nietzsche and Brian finds the tax codes.

35. This movie is really long.

37. I also don't feel that heartless though because I have seen a lot of people die in this film.

38. They keep cutting to the astronauts on the space station (which are all men — BOO) and it's cool to see their perspective on the weather systems. By cool I mean totally terrifying.

40. Ermahgad and just when the kids left the library to look for medicine for Laura who has blood poisoning (from when she helped people stuck in a taxi).

41. The wolves are just straight up hunting these kids. I know I said I was rooting for the wolves, but I don't think this is going to be as fun as I was thinking.

43. Jake Gyllenhaal is going to fight a pack of wolves with a chef's knife. I just don't see how this is going to work out.

44. For the record, the wolves are the worst of the special effects and they're still scary AF.

45. Out of the wolves' den and into the freezing outdoor temperatures, amirite?

47. "I made my son a promise. I'm going to keep it." Now I think Jack's friend has a dad crush on Dennis Quaid.

48. Jack and his buddy snowshoeing across the ocean to Manhattan and pausing under the Statue of Liberty is just exactly the moment this film has been building to.

49. The New York Public Library looks really cool all covered in frost and ice. I mean, not like reader-friendly, but like super interesting.

51. Lesson time! The president (the aforementioned douche VP) acknowledges the need for humans to change how we consume. He also notes that the U.S. and other countries are at the mercy of the countries they used to call the "third world."

52. There are so many more survivors than they thought! Aw. Warms my heart.

53. Wait, but if all those people survived staying in their big buildings in New York … should the kids never have left the rich kid's apartment?

55. An astronaut looks down on Earth and says "Look at that. I've never seen the air so clear." Roll credits!

It's a fan thing
Join SYFY Insider to get access to exclusive videos and interviews, breaking news, sweepstakes, and more!
Sign Up for Free
All Posts About
Fangrrls
Movies
Cli-Fi FANGRRLS
deja view
Related Stories