When we talk about horror movie antagonists, we don't talk about Leatherface's stamina and core strength enough. He is 7'6", with the speed and agility of an All-Star NBA point guard. Maybe if the Dallas Mavericks had drafted him the only massacres occurring would be on the hardwood with a basketball and not a chainsaw.

The Texas Chainsaw Massacre 2 is Leatherface's highlight reel. There aren't a ton of kills, but his athletic ability is well documented in it, among other things. For our latest installment of Deja View, I recently rewatched the second film in this franchise, and it's every bit of '80s outlandishness one could imagine. Leatherface being a failed basketball prodigy is only the tip of the iceberg of all of the thoughts we had while spending time in Texas with the Sawyer clan.

1. A scroll as long as Leatherface's chainsaw.

2. Looks like Leatherface's first two victims will be these Ivy school rejects. 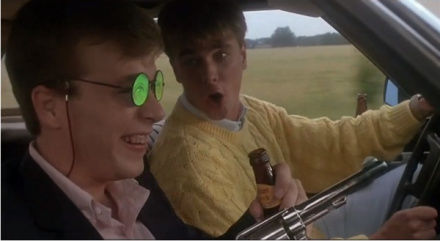 3. Who rides around wearing cable-knit sweaters in Texas heat?

4. These guys believe in the right to bear arms recklessly. What is the point of shooting highway signs?

5. I sincerely hope they die.

6. These guys need to die terribly.

7. They most definitely voted for Reagan.

8. Playing chicken with another car on the road is an act of natural selection.

9. I'd be incensed if I had to be subjected to someone's jackassery because they were tying up my phone line and I couldn't hang up on them.

10. A gun shop that doubles as a radio station. Feels very "below the Mason-Dixon line."

11. Looks like those country club jerks had the wrong one when they decided to play chicken with that pickup truck.

12. And they still haven't hung up the phone.

13. Only Leatherface could wield a chainsaw while surfing on a car going 70 mph in the middle of the night.

14. Leatherface is a CrossFitter. His stamina and core strength are truly unmatched.

15. They've been on this bridge for three country miles. I guess it doesn't end until someone dies.

16. What in the Grand Theft Auto modification, chopshop on wheels?

17. The one country club reject was trying to keep the top of his head connected to his body like it was a cap about to fall off.

18. Dennis Hopper has entered the movie looking like he wants revenge.

19. The gall to come on to someone else's crime scene and make demands!

20. How did the radio host, Stretch, get in Dennis Hopper's hotel room?

21. Also, what the hell is going on in this hotel? There are so many guys in cowboy hats being rowdy.

22. I just realized there isn't a Black soul around. We don't need to be wherever they are anyway, so God bless.

23. How did Dennis Hopper go from wanting evidence to sending the radio host away?

24. This movie is really about to be a buddy cop flick between these two, isn't it?

25. This french fry house looks more disgusting than it was probably meant to.

27. A chili contest is very Texas.

28. Yikes! A chili contest in which one someone kin to Leatherface entered.

29. I knew it! He has people eating other people in this chili contest. 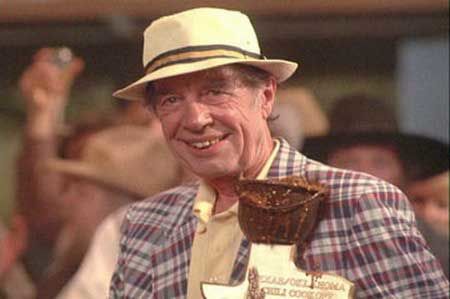 30. Ma'am, that was not a peppercorn, that was some finger.

31. I kind of want a show now called "Chainsaw Shopping."

32. The owner of the chainsaw store is way too aroused while watching Lefty vigorously test out the chainsaws he bought.

35. It was at this point that Stretch was on my last good nerve.

36. Why would you go to investigate?

38. This scratching hanger is on my nerves and I don't understand why he is using it instead of a comb.

39. Sir, please just pat your head like the rest of us.

40. Leatherface came out of nowhere. Does he have teleporting abilities?

41. He is so rude with this chainsaw. No kind of home training.

43. It took him that long to figure out going through another room.

44. OMG. He is still hitting this man in the head with the hammer, he hasn't died yet.

45. That chainsaw is entirely too close to her coin purse.

46. Not like this chainsaw is an extension of his manhood or anything.

48. No idea how Stretch is still alive after all of that.

49. Of course, she is going to follow them back to their hideout.

50. Lefty made this woman run at least a mile in fear before revealing it was him behind the wheel of the station wagon.

51. She fell through all the Mario levels.

53. Wow. They have an entire butcher shop operation for human meat.

54. Another reason to skip the work potluck.

55. Sure. Chainsawing all of the structural beams is a great idea.

56. L.G. got it the worst in this movie. He was still alive even after getting skinned. 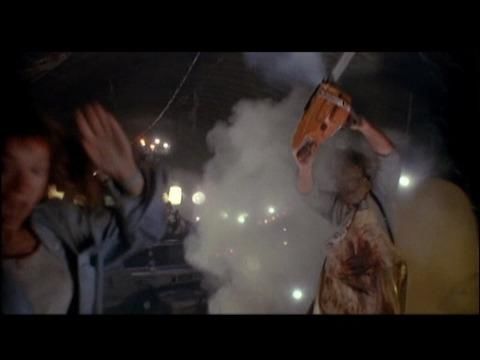 61. I wish this movie would stop playing in my face.

62. Chainsawed in the buttocks. OUCH.

65. A grenade has entered the movie.

66. Of course, Grandpa got everyone killed.

68. Such a dramatic ascent up the ladder to the top.

69. I know her legs are burning from all of those slashes.

70. If the knife doesn't kill her, the breath on Chop Top Sawyer will take her out.

71. I honestly thought Grandma Sawyer was going to come alive when Stretch took the chainsaw out of her hands.

72. Chainsaw dancing seems like the perfect way to end this movie.

It's a fan thing
Join SYFY Insider to get access to exclusive videos and interviews, breaking news, sweepstakes, and more!
Sign Up for Free
All Posts About
Fangrrls
Movies
The Texas Chainsaw Massacre 2
deja view
You May Also Like
Recommended by Zergnet
Latest on SYFY WIRE