74 thoughts we had while watching Ella Enchanted

Fifteen years ago, Anne Hathaway, fresh off the success of Disney’s The Princess Diaries, starred in another princess-adjacent film: Ella Enchanted. Loosely based on the book by Gail Carson Levine, the movie follows Anne’s Ella, a character gifted with the trait of "obedience" as she tries to get rid of this horrible gift-that-is-actually-a-curse, bring equality to her kingdom, and save a very twee and handsome Prince Char (played by a pre-Hannibal-Cannibal Hugh Dancy). Today, on its anniversary, we decided to give it the Deja View treatment.

1. Love a good “fly into the scenery introduction.”

2. And a RHYME! How whimsical!

4. Whose voice is narrating this? Is it John Cleese? It sounds like John Cleese ... I was wrong, it’s Eric Idle, but Eric was also in Monty Python, so I’m counting it as being correct.

6. Wow, Vivica A. Fox coming in with a very early 2000s outfit and I am having some awful flashbacks to my clothing decisions in undergrad.

7. That baby should've punched Vivica in the face for that obedient gift, I mean dang.

8. “But her heart made her kind.” Awwwwwwwww, look at Ella stand up for that lil Indian bebe.

9. Also Ella is clearly being raised by a Human-Fairy lesbian couple, right?

10. Why is that child playing the mandolin with a bow? Isn’t it a plucking kind of string instrument?

Photo: Disney/Miramax
11. And why does that child have a fake British accent when everyone else is American?

12. LOL, who is this fake man pretending to be the dad when he hasn’t had a single line? OK, sure. Buddy just lives there for appearance’s sake.

14. What do you call a deadbeat dad who gets married to a horrible woman and then ignores you?

15. Okay, Lucy Punch, who is playing Hattie, has for sure played Cinderella’s evil stepsister in at least four separate productions and that is the kind of dedication I find to be very impressive.

16. “You know Char and his uncle are responsible for the segregation of the kingdom.”
“So? He’s dreamy.” #WhiteFeminismBeLike

17. Of course her dad’s a door-to-door watch salesman. Where is her other mom, Minnie Driver?

18. This desegregation metaphor is not super fun to watch.

19. I hate that they call him “Char” with a hard “ch” even though Charmant should be pronounced with a soft “sh” how dare.

22. I like that Hugh Dancy basically has Frodo’s haircut in this movie.

24. This is kind of a horror movie when you think about what complete obedience means.

25. “Ella of Frell, you are not like other girls.” Oh, it’s my favorite kind of girl. The Not Like Other Girls Girl.

26. (Teenage girls are the reason the Beatles succeeded in America, fight me.)

28. THIS IS TOO MEAN AND IT IS MAKING MY HEART HURT

29. I do appreciate them making this about women and not about TWU WUV, but oh poor Ella.

30. Jimmy Mistry is in this movie, too? Dang. 2004 was all about that desi representation. 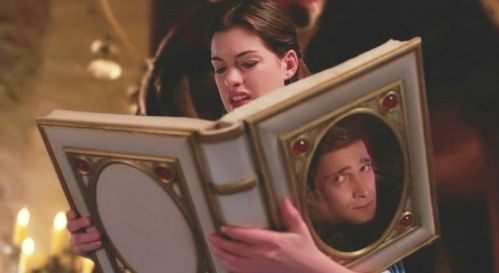 31. Between this and Ever After and Shrek, I’m all for late '90s / early ‘00s princesses kicking the butts of ruffians in the woods.

32. I’m identifying heavily with Slannen who is pushing Ella into be his friend bc I, too, make my friends be my friends.

33. This movie is really very similar to Shrek.

34. This guy wants to be a lawyer but I would like to get paid for tomfoolery.

35. Why is this step-family so obsessed with Ella?

36. LOOKS LIKE MEAT’S BACK ON THE MENU TONIGHT, BOYS.

38. And smooth of tongue, too. “Your boyfriend couldn’t make it?”

39. Wait, now I just think Hugh Dancy was the lead singer of my favorite emo band.

40. We stan a girl who wants a monarch who cares.

41. “Ella Ella!” I’m sad that "Umbrella" didn’t come out until three years after this movie :(

42. I love that the giant wedding is uh … using Bollywood music and Indian beats? Okay, what Indian producer is responsible for this?

45. I haven’t mentioned the snake Heston yet, voiced by Steve Coogan. Mostly because I’m so disappointed that he hasn’t done a Michael Caine impression yet.

46. I can’t believe they bought the rights to "Somebody to Love" to do this in the movie.

47. ALSO THE FORESHADOWING OF “TAKE A LOOK IN THE MIRROR AND CRY.”

50. I’m going to need to know what hair products Anne was using in this movie because her hair looks so silky-soft and I would like to replicate it.

52. So, in the world of Ella Enchanted, the Grimm Brothers exist … meaning all the fairytale tropes we know exist … so why doesn’t Char get that his uncle is obviously evil?

56. “Stop tonguing the foyer” is a line someone got paid to say, so there’s that.

57. HOW WAS THIS NOT AN DISNEY CHANNEL ORIGINAL MOVIE OMG.

58. Omg Cary Elwes’ “Charmed but also you disgust me” face is perfection.

59. A good boyfriend will hop behind you if you start hopping.

60. I actually think I could watch Cary Elwes chew scenery for hours.

63. Dad out here lecturing his wife on being more maternal when he was the one who decided to play absentee father? I don’t think so.

64. I love that Anne Hathaway got to be a princess in a ballgown twice in her career within the span of three years.

65. Oh buddy, oh Prince Char, you are in so much trouble.

71. My aesthetic is couples who sword-fight together and have meaningful conversations in the midst of said fighting.

73. Well, that was an ending, good for them, but why didn’t we get to see Ella’s reconciliation with Jas-from-Bend-It-Like-Beckham????

74. OH MY GOD, do you think Hugh Dancy is so embarrassed that he had to sing and dance at the end of this? Because I love a song and dance number, but I am embarrassed for him.