So I Married an Axe Murderer is one of the few Mike Myers movies I missed completely growing up. Of course, I'd heard of it before, and I even remember seeing it on display at the Family Video my family frequented. All I remember thinking at the time whenever I'd see the VHS box was, "Why the hell does this guy look so gleeful if he married a murderer?" I wondered how absolutely strong this woman had to be to kill people with an ax. Have you ever chopped wood before? It's a workout.

Anyway, many years went by, and I saw everything Mike Myers did, from Wayne's World to Shrek Forever After. Not The Love Guru, though — I do have some dignity. But I missed So I Married an Axe Murderer and since it's mentioned a lot among cult classics, I've finally decided to find out what happened when this guy married this woman with herculean strength.

1. "There She Goes" by The La's was the very first time I learned there was a musical category named Jangle Pop.
2. That's a big ass cup of bean juice.

3. Mike Myers is joking it up from the start.
4. This friend does indeed look like an undercover fed.

5. Does this take place in Portland? I'm getting Portland vibes. I've googled nothing about this movie if you can't tell.
6. Charlie strikes me as someone who would consider performing his beat poetry on Def Poetry Jam but then would quickly reconsider.

7. Look at everyone. No phones, just vibing.
8. She stole his cat?!
9. Oh, I see. Charlie has a type.
10. Someone smelled like beef vegetable soup?? Maybe they needed some Secret.
11. His beat poetry would do well on TikTok ironically.

12. Can I just say how the music so far has fit perfectly?
13. He wasn't lying about his parents being eccentric.
14. All I hear is Fat Bastard from the second and third Austin Powers movie as Mike Myers plays his own dad in this movie.

16. Charlie's parents would definitely be on Facebook sharing all kinds of mess.
17. Why is mama kissing his friend like that?
18. Charlie's mom might need to change her underwear after kissing his friend like that.
19. This takes place in San Francisco. I mean, I was close in hipster energy.
20. I just knew he was going to have an accident in his car with all that looking around.
21. Defund the police.
22. Not Charlie coming off the street to work for free in a butcher shop so he can get to know his crush better. Some people can't even get a text back.
23. Yuck.
24. The way they're playing with this meat is making me nauseated.

25. I mean, the movie is doing a great job at convincing me that Harriet is indeed a murderer.
26. Harriet spent her day casing sausages, and it looks like she's going to spend her night casing just one more.
27. Excuse me? Is she having a wet dream next to the guy she just had the secks with??
28. Chile, who is Ralph?!
29. "Thanks for the hot dog, Harriet."
30. The sister offering to make him breakfast. Interesting.
31. Not cereal after offering this man a whole Denny's Grand Slam breakfast spread.
32. What is the rent/mortgage on this place? It's massive.
33. Okay, but do you really know Harriet, though? I know y'all slept together but...
34. Budding relationship montage. You have to love them.

38. Walking in the rain on purpose stresses me out.
39. Oop! Did he take her to see his parents? Already??
40. Does mama have some lowkey pipes on her?! She was kind of singing a little bit.
41. Dad almost got his arm taken off for sneaking up on her.

42. Did she learn those moves from her previous husband?
43. "A bitcher."
44. You know Mike Meyers had some healthy-looking hair. Very Selsun Blue commercial quality.

49. Not Cathy being the first and only Black person to have a line in this movie.
50. That's Luenell!! Cathy is Luenell!

51. That health shake doesn't look too appetizing.
52. I would have just had to stay in that closet.
53. Back scratches are good, though.
54. Charlie. Chile, you had a reason to get scared.
55. A beat poetry proposal? Okay. This is quite cute.

56. Why would you come to hug someone in just a bath towel anyway?!
57. This is a cute little wedding.
58. "You're the best husband I ever had," he says to her, and she immediately got defensive—bad sign.
59. They almost died. They almost went right off the side of that cliff.

60. A storm? What could go wrong on this honeymoon?
61. Oop! Cathy got another line!
62. I know those aren't her wedding rings covered in the ash of the men she murdered.
63. I wish his friend would have found out she was a killer before they got married.
64. Hey, it's the guy from the Beethoven movies. He looks irritable in this too! 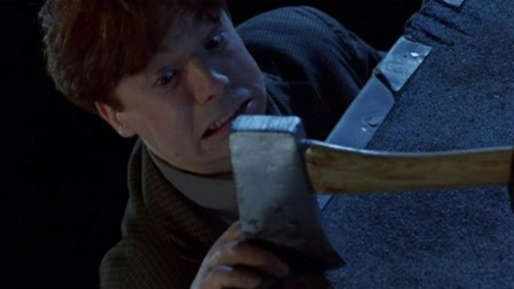 71. They have been on this roof forever.
72. I don't know. I might have let Rose slip from my hand after all that.
73. So he didn't marry an axe murderer after all.
74. I am relieved after all these years.