You don't need me to tell you that the last week has been one of the hardest in the recent history of our nation.

Listening and learning are important things for everyone to be doing right now. Empathizing is another. Until white people can get a sense of what daily life is like for a black person in America, there won’t be any significant change in the racial divide in the United States. One way to do that is to read. There are many great comics and graphic novels out there that do a wonderful job of capturing elements of the black experience. For me, personally, comics have been incredibly helpful in expanding my worldview and helping me see things from a perspective different from my own.

For example, Issue #181 of The Avengers, when government stooge and ace antagonizer Henry Gyrich forced the team to accept the Falcon, was the first time I had ever heard about equal opportunity. I was 7 years old, so 60 Minutes was not yet part of my regular viewing schedule. Sure, it was handled in a clunky fashion and it was painfully obvious that Sam Wilson's dialogue during his first run with Earth's Mightiest Heroes was written by a white dude. But, that story led me to ask questions I had never thought to ask, like why does there need to be a law to make sure people of skin colors different from my own get a fair shot at a job?

We should all want to read stories that take us outside of our comfort zones and what we find familiar and safe. There are countless comics that provide great insight into the black experience, while also being flat-out great reads. Below is a list of a few that have had a particularly strong impact on me, as well as recommendations from prominent black creators.

I know there are TONS of comics by black creators out there that I may not know about. Find me on Twitter/Facebook/Instagram and tell me about them. I like reading good comics and helping boost their profile.

Don't forget that Behind the Panel is a multi-platform series that can help keep you entertained during these stressful times we're in. Our video series is loaded with my in-depth interviews with amazing comic book creators. The Behind the Panel Podcast is an audio documentary series that provides unique insight into your favorite creators and stories. Check 'em out, we think you'll enjoy them.

Destiny Ajaye is a strategic wunderkind and a teenaged agent of radical change in Genius, a series co-created by Marc Bernardin, Adam Freeman, and Afua Richardson. It debuted as a one-shot in 2008, but due to various circumstances, the first five-issue miniseries didn't roll out until 2014. On its own, the story about the occupation of several blocks of South Central L.A. led by a teenage military wiz who united all the gangs was a daring, radical, and downright concept. But, the series coincided with the unrest that erupted in Ferguson, Missouri, over the death of Michael Brown, which made it frighteningly current. The genius behind Genius wasn't how it foreshadowed what happened in Ferguson, but in the message it conveyed — at some point, the oppressed would decide they had had enough and rise up. And when that happened, the kids would lead the way.

Writer David Walker wanted his iteration on the Squadron Supreme's Nighthawk to be Marvel's answer to Batman. Except this hero, a black man, did a lot of things that Batman couldn't and wouldn't do: like tackling police brutality and socioeconomic inequality in minority neighborhoods in Chicago. This made Nighthawk a brutally unflinching series, and one of the most honest portrayals of a caped crusader we've seen in years. The art, by artists like Ramon Villalobos, Martin Morazzo, and Tamra Bonvillain, was kinetic and matched Walker's dialogue in its intensity. This comic deserved a longer lifespan.

Milestone Comics broke ground with all of the books that heralded its arrival on the comics scene in the mid-'90s. Icon may not have been the most popular series (that would be Static, of course,) but to me, it was the most fascinating of the Milestone titles. Co-creators Dwayne McDuffie and M.D. Bright made Augustus Freeman IV, Icon's alter ego, an uptight Reagan-esque establishment figure who was schooled on what being a black hero means in the modern world by a black teenage girl. Rocket and Icon's generational divide and differing ideological views was unlike anything you saw in comics at the time. Most partnerships in mainstream comics up to that point, like Wolverine and Jubilee's, firmly established the veteran hero as the leader and the youngster as the sidekick. Icon showed that the kids were all right, too. 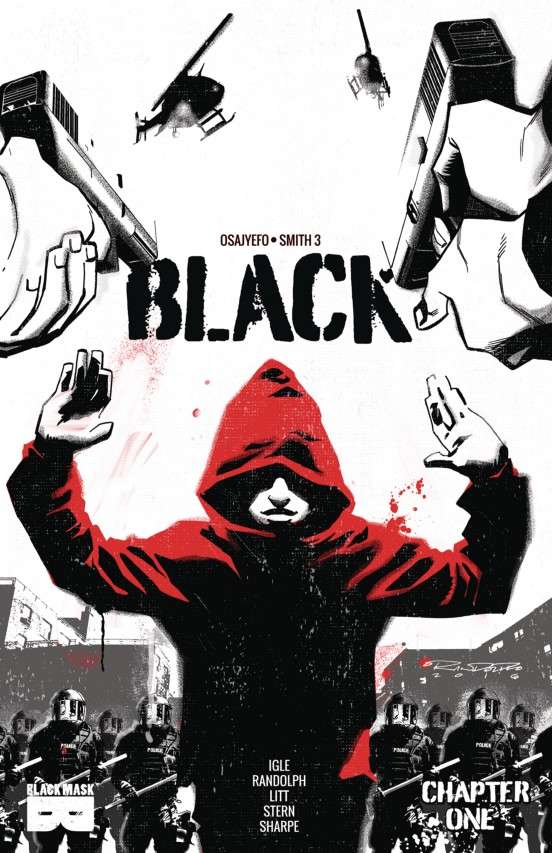 A Kickstarter sensation when it first dropped in 2016, Black by Kwanza Osajyefo, Tim Smith 3, Khary Randolph, and Jamal Igle had a killer hook: What if only black people had superpowers? The book offered a searing takedown of the institutional racism that black people continue to face, under the guise of the comic book-friendly veneer of a global conspiracy trying to keep super-powered blacks under control. It's worth noting now that the publisher, Black Mask Studios, is donating 100 percent of webstore profits from sales of Black and other books to bail funds for protesters. 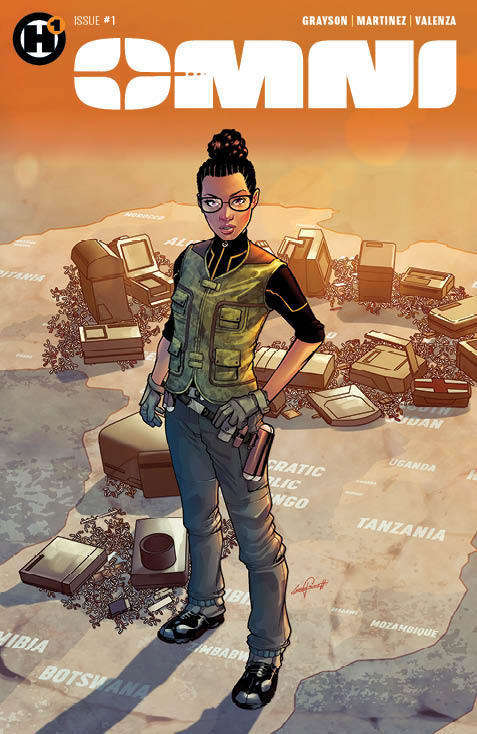 Black creator Kwanza Osajyefo has some recommendations for SYFY WIRE readers. He suggests Omni, one of the books in Humanoids' Ignition shared universe that he is one of the architects of. Currently written by Melody Cooper, who recently made headlines for exposing Amy Cooper's racist meltdown against Melody's brother in the birding area of Central Park, it centers on Dr. Cecilia Cobbina, the smartest woman on the planet thanks to her newfound ability to process thoughts at the speed of light. The book is ambitious and unapologetically political, elements that play to the strengths of Cooper, who's also a filmmaker, TV writer, and playwright. You know how people wonder where the role models in comics are for young readers, male or female? Point them to Cecilia.

Excellence, the adventures of a secret cabal of black magicians known as The Aegis, is another of Osajyefo's recommendations. Co-created by Brandon Thomas and Khary Randolph, it is a visually stunning series that also uses generational conflict to propel its storylines. The hero of the tale, a young wizard named Spencer Dales, wants to shake up the spell-casting patriarchy. The art in this series is eye-popping. Randolph told us last year that he and colorist Emilio Lopez are constantly challenging each other to use color to emphasize the different worlds the story plays in. The result is a series that looks vastly different from most other books on shelves right now. 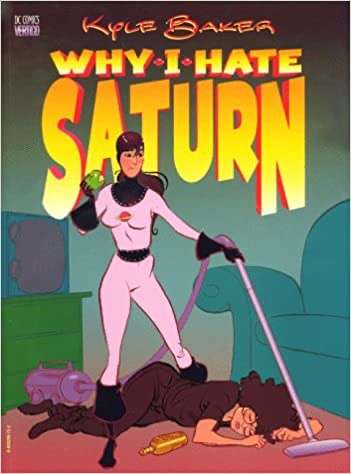 Why I Hate Saturn

There are few people I respect more in comics than ChrisCross. He's not just a fabulous artist but a straight shooter and someone who studies and respects comics history. The first recommendation he has for SYFY WIRE readers was Kyle Baker's What I Hate about Saturn. That graphic novel about a New York City columnist on a quest of self-discovery made Baker's rep and won him an Eisner Award. According to ChrisCross, it earned the cartoonist much more. "No one knew that Kyle Baker was such a genius writer as well as an artist... he just got fed up with the norm of comics and decided to push along in another direction," he says. "It takes a different set of muscles to do stories about characters, original characters, who weren't shooting laser beams from their eyes or outrunning bullets with ease. Kyle unleashed stylistic paneling, no word bubbles, mini-dialogue paragraphs underneath the panels, which if you think about it is a really hard thing to do if there are more than two characters in a panel."

The artist goes on to praise Baker for his ability to write a well-formed female character and for promoting diversity with authenticity. "People need to be awakened to this book."

ChrisCross' other recommendation is a creator-owned book I had never read until he had mentioned it to me during our interviews for our Milestone Comics retrospective. Brotherman is the brainchild of siblings Dawud Anyabwile and Guy Sims. The series began with Brotherman: Dictator of Discipline and told the story of a hero with no super powers, who fought crime in Big City. It's been published intermittently since 1990, and is considered a major influence black comic creators.

"When I worked at Milestone, we all pumped that book everywhere we went," ChrisCross says. "The stories are hard-hitting, with an unforgiving yet beautiful urban aesthetic. It’s still never been duplicated. No one has had the balls to create something that could match it."

It's a fan thing
Join SYFY Insider to get access to exclusive videos and interviews, breaking news, sweepstakes, and more!
Sign Up for Free
All Posts About
Comics
Features
Behind the Panel
Black Lives Matter
lists
opinion
You May Also Like
Recommended by Zergnet
Latest on SYFY WIRE