This year marks Godzilla's 65th anniversary, and there's no better way to celebrate a milestone like that than buying yourself (or loved ones) some gifts.

Fortunately, Toho Studios has spent all of 2019 ramping up its star's brand both in Japan and the United States, with convention appearances and a wide array of specialized merchandise, and the Legendary movie Godzilla: King of the Monsters also provided a bounty of fun consumer goods. Add similar plans from other monster movie studios and the endless creativity of fans, not to mention the King Kong musical, and you've got perhaps the best selection of kaiju gifts we've ever seen on this side of the Pacific (even if you might have to do some long-distance shipping).

The Godzilla Showa Era Criterion Set: No pressure, but if you truly love a kaiju fan and have somewhere between $125 and $170 to spare, you will buy them this monster of a Blu-ray set. The smart folks at the Criterion Collection paid tribute to the Big Boy with its 1000th release. The set includes all 15 movies from the franchise's Showa Era, which spanned from its debut in 1954 through 1975's Terror of Mechagodzilla.

It also features some deep cut special features, including a truly transfixing, hourlong reel of unused special effects from Toho monster and war movies from the era. And if you get the limited edition, it includes a gorgeous oversized book with lots of trippy kaiju illustrations and an essay from Ishiro Honda biographer Steve Ryfle. On sale now at Barnes & Noble.

Ultraman Blu-ray sets: Eiji Tsubaraya, the visual effects master who worked on the first decade of Godzilla movies, also created the Ultra Series franchise, which has been running strong for five decades. A cross between kaiju and tokusatsu, it's produced endless series and movies, many of which have rarely been available in North America.

Toho SFX Books: Tokyo's Shinjuku district not only has a hotel with Godzilla roaring atop its roof, it also features a massive official Godzilla store. This place has absolutely everything a fan could possibly want, with new items constantly being released — it's like a Monster Island, except for commerce. Just looking through its website is a treat. Alas, the store does not ship to the United States… but people on eBay have no problem doing so. It may cost a bit of a premium, but for items like this set of SFX books, which feature photos from the making of three dozen kaiju movies, it's totally worth it. You can get them individually — each book focuses on one movie — or collect the entire set.

Famous Monsters of Filmland: The famed monster magazine now publishes an annual edition, which it hawks at conventions from coast to coast. It's filled with essays, interviews, and photos that make it a fun read that should last someone a good week or so. The cover art alone is worth the purchase.

Crossover glamb shirts: A Japanese apparel company, glamb produces a lot of dope crossover lines. The Godzilla/glamb line won't be out until March, but you can pre-order them now. You should do it soon — pre-orders end on November 25th.

Tomodachi shirt: We're trying to not list too many items from the Godzilla store, just for practical purposes, but this shirt featuring Godzilla and Jet Jaguar in the post-battle summit that has become a beloved GIF is too good not to include. It's very expensive on Poshmark, so maybe have a friend in Japan make the trip for you. And if that's impossible, well, there are much cheaper fan-designed shirts, like this one.

Kaiju sweater: Godzilla could be the world's largest Christmas tree, so long as he agreed to not fire off that atomic breath during the holiday season. Which isn't happening on this sweater. Things could get ugly. But festive!

Mondo's new shirt line: Just when you thought this year had produced enough Godzilla goodness, Mondo went and announced that it is producing a new line of shirts and accessories in tandem with Toho. The first round of apparel includes t-shirts, long-sleeved tees, hoodies, and pins. There will be several more rounds to come, with mugs and other products. The Gigan shirt above is particularly handsome.

Anniversary figures: Toho and Bandai spared no expense in producing statues and action figures to mark the 65th anniversary. There are a plethora of different monsters available, as well as many different versions of Godzilla. Some of these figures were created specially for San Diego Comic-Con (yeah, I've got the 1954 Godzilla on my desk), but many are still available, for retail on Amazon.

Chibi toys: Monsters don't have to be scary, as these adorable (and even more adorable) Chibi figures make clear. These Kidrobot Godzilla vinyls are cute, but not quite as cute as Chibis. A happy medium.

Mothra plush: Handmade Mothra and other plush toys on Etsy, for children (and adults!) that just can't sleep without a monster to protect them.

Kaiju ABCs poster: Finally, a reason to have children (just don't let them think the alphabet has multiple G's and M's — the artist clearly couldn't limit those letters to just one monster). Available, as most of these pieces are, on Etsy.

Kaiju babies blanket: Another reason to have children. Or really, just a cute way to stay warm this winter while watching all the Blu-rays we have listed above. The monster fan in your life will thank you — via text, since they're never leaving their homes once they get all this stuff.

Kaiju baseball card poster: This poster is designed by Chet Phillips, an Etsy and convention staple who produces all manner of wondrous, stylized monster prints. He does them in a vintage matchbook-style aesthetic, making his products instantly recognizable. They come in greeting card, poster, and pin form. Very worth looking through all of his designs. 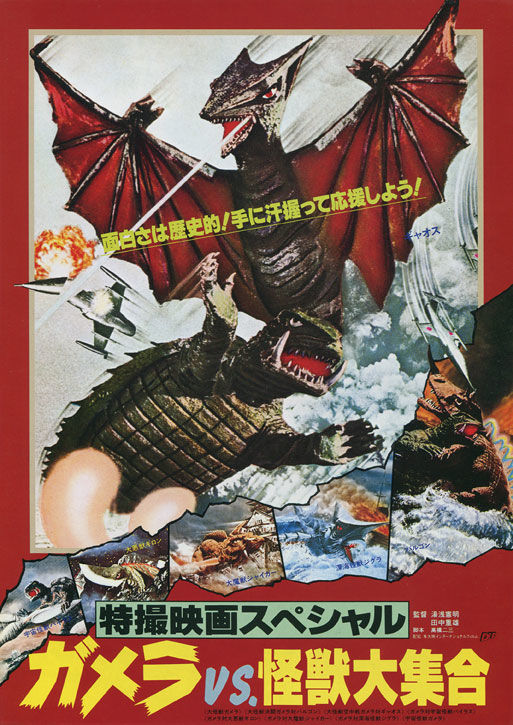 Chirashi: These are small promotional posters that are distributed throughout Japan. They make a pretty affordable collectible, especially the ones for special events, anniversaries, and revivals. This New Zealand site has a huge selection of them. The one above is for a 1966 Gamera movie — you may be most familiar with the kid-friendly turtle kaiju from Mystery Science Theater 3000, but it's one of the most iconic creatures in Japanese monster cinema.

King Kong Penis Underwear: Look, we don't want to kink-shame here, and if this is something that you think someone with whom you are close might like, by all means, go for it. Just make sure you carefully consider all the implications and consequences of purchasing a King Kong cock sock for someone else (if you want it for yourself, then we fully endorse!).