The Alien franchise is home to some compelling women. They're all warriors in their own right. They embodied strength and resilience, but those qualities are only the tip of the iceberg of reasons to love them. I love that they're usually the smartest person in the room — setting aside that the room hardly ever realizes it until it's too late. It pains me to this day that we weren't rewarded with at least a proper sequel to Sanaa Lathan's entry into the Alien/Predator universe in AVP: Alien vs. Predator. She starred as the movie's protagonist, Alexa Woods, and was phenomenal in the role.

Alexa is in the middle of what looks like a pretty epic climb up Lho La Ice Fall in Nepal before she's interrupted on her day off by Weyland execs. I love how sure of herself Alexa is about her knowledge and skills, even as the only Black woman in the room. She doesn't hold back. And she doesn't have a reason to either. She is too aware of how good she is at what she does. She did get flown out by Charles Bishop Weyland just to have a meeting, and I know for a fact she waited for that check to clear before agreeing.

Alexa does her due diligence, letting everyone know what the deal is as Weyland briefs on the excursion he has planned. However, in true Weyland fashion, he dismisses her concerns even after she states nothing but facts. To her credit, she tells him to find another guide and walks off, 20-inch bundles of hair swinging. The only thing that keeps her from going all the way back home is knowing she's the best to keep everyone involved alive. She earnestly cares about what she does and making sure people are safe, another attribute of hers you have to respect. Alexa says it herself: "When I lead my team, I don't leave my team." Thankfully for this Black woman, she doesn't end up suffering the consequences of not going home when she had the chance.

Things go right to hell once Alexa and the team she's leading reach their destination. Alexa Woods pretty much gets to tell everyone I told you so and has every right to do it. But, she doesn't and instead focuses on trying to get as many people back to the ship alive. Most of the so-called experts Weyland brought in to help him find what he was looking for in the pyramid froze up in critical moments, but not Alexa. Her display of sound mind and quick thinking is why she's the best environmental technician and guide, and also why Charles Bishop Weyland should have listened to her in the first place. It's her quick thinking and reflexes that saved his sorry behind from sliding down the tunnel to a sooner death than he ends up having.

It's Alexa's common sense and ability to see things for what they are that help keep her alive. She lasts way longer than the security officers on the trip. She even does a better job of piecing together what the deal is with the xenomorphs and the predators. Alexa pretty much says in her own way, "Y'all give the hunters their guns so that they can do what they need to and we can possibly survive all this, damn!" It's this very matter-of-fact attitude that results in her first xenomorph kill. Her second kill happens when she saves one of the predators from a xenomorph, effectively earning his respect. Alexa Woods got a predator to make her xenomorph-hunting gear on the fly — that's power.

Honestly, killing a xenomorph should automatically qualify anyone for warrior status. Alexa killed two of them up close, that's bad bitch status. Those kills earned her an intergalactic killer acid tat from the predator she saved, the expert on acknowledging real G's who move in silence like the g in lasagna. Alexa truly deserved, especially after having to put a hot one in the cute guy she'd been flirting with the entire time after a facehugger had impregnated him. 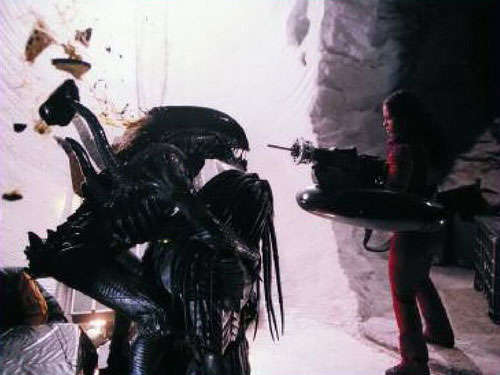 No matter what, Alexa was going to make sure none of the xenomorphs made it out, even if it cost her life. Thankfully for her, it doesn't. After blowing up the pyramid, she works in tandem with the predator in an epic battle against the xenomorph queen. Alexa sends the queen to a watery grave and earns a parting gift from the predators who were watching the entire time. They definitely could have helped, but I guess they realized she had it in the bag.

Alexa Woods is not only one of my favorite Black final girls but one of my favorite characters to come out of these franchises. Woods was definitely the smartest person in the room — and strong, compassionate, and resilient enough to earn the respect of the universe's greatest hunters. She is a warrior woman, through and through.

It's a fan thing
Join SYFY Insider to get access to exclusive videos and interviews, breaking news, sweepstakes, and more!
Sign Up for Free
All Posts About
Fangrrls
Movies
Alien vs. Predator
Sanaa Latham
warrior women
Related Stories

Very Important Binge: The best TV appearances of the Amazons

The director and star of 'Orphan: First Kill' on the horror prequel